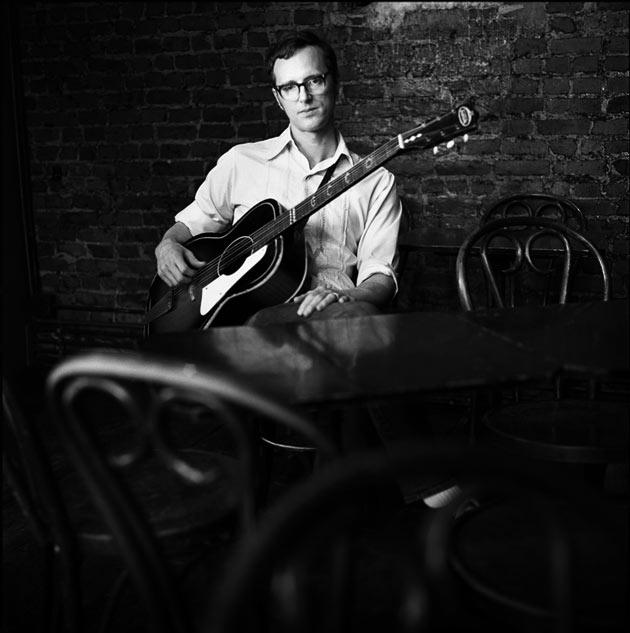 Every Tuesday night when he’s not on tour, you can find guitarist Michael Daves performing at Rockwood Music Hall in New York City, his home base of seven years. Sleep With One Eye Open, his 2011 album with Chris Thile, was nominated for a Grammy for Best Bluegrass Album. The following is in his words, as told to photographer Jacob Blickenstaff.

“Having a weekly gig is almost like going to church. There is a ritual aspect to it.”

I love Nashville, but I’ve never considered moving there. It’s a little set in its ways, and I also feel like the bluegrass community is too concerned with chasing and trying to sound like commercial country music. I think most young, cosmopolitan musicians are not interested in that pursuit. Most of what I’m interested in in the way of bluegrass happened 40 or 50 years ago, and most of what I’m interested in with music now is happening in New York. There are a lot of people here who’ve grown up in, or come out of, the bluegrass community who are now doing other things—The Punch Brothers, Chris Thile, Sarah Jarosz just moved here. There’s a critical mass. New arrivals can feel at home and attend bluegrass jams, but no one is giving you the hairy eyeball if you do something outside of the traditional bluegrass fold.

There are old folkies who have been in New York since the folk revival and all the jams that used to happen in Washington Square. The Greenbriar Boys, the first non-Southern professional bluegrass band, started playing in New York in the late ’50s—bluegrass had only formed in the mid-to-late ’40s. Tony Trishka, Andy Statman, and Kenny Kosek were in various bands like Breakfast Special and Country Cooking. They were doing this progressive take on bluegrass in the ’70s that in those days was pretty out there. Tommy Ramone lives upstate now and has a bluegrass duo called Uncle Monk—he plays mandolin and they play Monroe Brothers-type stuff.

Having a weekly gig is almost like going to church. There is a ritual aspect to it. It’s a release for whatever has gone on in my life that week. I know I can just show up on Tuesday night and let it out. I don’t tour a lot, I have a family, and I teach and I’m devoted to those things. But if I’m on the road and not doing a Tuesday night at the Rockwood, I’ll start to feel uncomfortable, like I’ve broken the routine and something is wrong.

“Contact” is an occasional series of artist portraits and interviews by Jacob Blickenstaff.