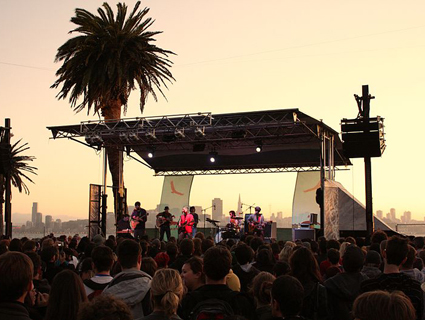 It’s here: the Bay Area’s most surreal music gathering, based on the setting alone. Plunked on a landfill island in the middle of San Francisco Bay the Treasure Island Music Festival offers a textured, talented lineup for the weekend of October 19-20. With Atoms for Peace and Beck headlining on Saturday and Sunday, respectively, the fest lacks not for star power. All the buzz around Radiohead’s Thom Yorke collaboration with the Red Hot Chili Peppers’ Flea is understandable, and Atoms for Peace is sure to deliver a riveting set—but those guys are olddddd, man!

Major Lazer and Animal Collective will also be there, and if you’re already going, I hardly have to convince you to see them. For some of us, though, the real excitement will come earlier in the day, with a diverse and youthful sampling of bands that promise to entertain. Here are seven reasons to get yourself to the Island before the big boys go on.

With “Dying in the Pussy,” rapper Antwon spins a darker, more philosophical narrative, without losing his sense of humor. To my ear, it’s a song about post-coital tristesse, or the malaise some men suffer after sexual climax. And it takes the morbid and bawdy aspects of hip-hop to their logical conclusion. In the video, waifish women dance a drugged-out sway, as tragic videos flicker in the background. By contrast, the lyrics sumptuously detail the carnal appetite of the man (Antwon) who told SPIN his “favorite thing to do on a day off is just lying in bed, having sex all day.”

Disclosure (Bridge Stage, Saturday 4:20-5:10)
This brotherly British dance-pop duo brings disparate influences to its electro, which might feature a soul singer or, just as likely, a motivational speaker. But these talented siblings stand out for another reason: Disclosure is simply a class act—in a messy, bro-y electronic scene dominated by testosterone dubstep and neon, it’s among the most sophisticated. The duo’s stylistic takeover was validated this past summer when its latest record, Settle, topped the UK’s Album Chart.

Haim (Tunnel Stage, Sunday 3:35-4:15)
“The more powerful girls are, the more interesting they are,” Alana, the youngest Haim, told Fader. The Haim sisters certainly are potent. In “The Wire,” the trio must stave off sobbing suitors, including Jorma Taccone of The Lonely Island. But it’s a warm, familial strength—and they’re confident enough to take their parents on tour. Indeed, there’s something reminiscent of the Jackson 5 in the group’s wholesome pop. The Haim (pronounced like “rhyme”) girls are having fun, and it’s totally infectious.

James Blake (Bridge Stage, Sunday 6:00-6:50)
Blake’s masterful composition defies genre-boxing. The diversity (Aaliyah to Joni Mitchell) of his influences aside, Blake brings listeners to a place more pure and spacious than his contemporaries in the minimal dubstep world. What’s more, he’s a singer-songwriter, as strange as that may sound to fans of electronic music. His first LP snagged a 9.0 on Pitchfork. But I like his latest, Overgrown, even better.

Japandroids (Tunnel Stage, Sunday 6:50-735)
Hail the two-man punk band. While the Japandroids, of Vancouver, are certainly good for a wild romp, they don’t sacrifice content. Theirs is a message of vitality and sensation—awesomely positive stuff, all in the context of the pain and hormones that young people suffer. In “The House that Heaven Built,” guitarist and lead singer Brian King gleefully cracks beers and throws his body into the crowd. While this behavior is not mandatory during their set, it is recommended.