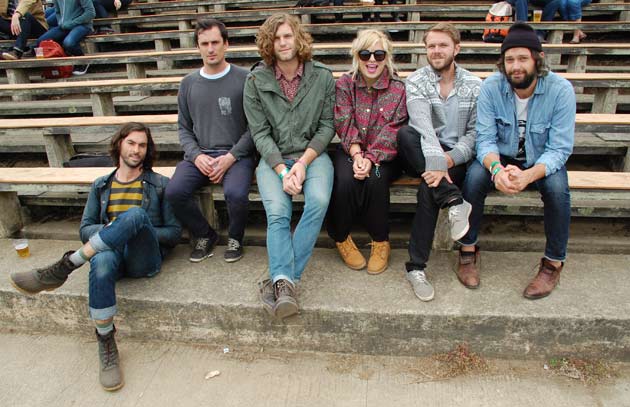 The Head And The Heart Maggie Caldwell

There is a certain sound that became popular in indie music four or five years ago that seemed to have sprung forth in reaction to the gloomy mood of the Great Recession. It is a stripped down, bombast-free, rustic folk sound popularized by such acts as The Fleet Foxes, The Great Lake Swimmers, and Mumford and Sons. The songs often feature swelling choruses and invoke a spirit that rallies against the dying of the light. This boot-strap hitching, mellow optimism also has been the hallmark of a band of six strangers from Seattle, who, through mutual admiration of each other’s talents at open mic nights around the Emerald City, agreed to join forces, record an album, and head out on the road, recession be damned.

It’s been four years since the members of The Head and the Heart released their self-produced eponymous first album, a collection of heart-on-your-sleeve, piano-driven acoustic folk songs laced with violin; rounded out by a clean, driving percussion section; and driven home by gorgeous three-part vocal harmonies. Through heavy touring and word of mouth, they’ve sold more than 10,000 copies. And when Seattle’s Sub Pop label re-released an expanded edition in 2010, The Head and the Heart’s NPR darling status was sealed.

Out this month, the band’s follow-up effort, Let’s Be Still, stays true to the Recession Rock sound that worked so well for them, but they’ve toned down the thematic earnestness and are no longer singing about setting forth into the big, bright beyond. Instead, they seem more contemplative about the state of the world and their place in it. Last week, vocalist Josiah Johnson told Buzzfeed that the (beautiful) first single “Another Story” is actually a meditation on the Newtown school slaughter.

I caught up with Johnson and vocalist/violinist Charity Rose Thielen at San Francisco’s Outside Lands festival on a misty August afternoon. Fresh from a Canadian folk fest, three of the bandmates were preparing to do an unplugged set for about 200 tuned-in fans in a eucalyptus grove in Golden Gate Park. Before they headed into the woods, we took a few minutes to talk about their rise to indie fame, their fear of improvisation, and how they’ve grown on their new album.

Mother Jones: How was the Canadian festival?

Charity Rose Thielen: The people are so nice. They have these relational workshops where they throw four bands together and you kind of jam on each other’s music for the audience. It’s kind of a staple of like every folk festival.

Josiah Johnson: It’s terrifying and it’s never perfect, but it’s some kind of beauty just realizing that you might screw up, but you’re going with it anyway.

MJ: Who were you playing with?

JJ: Neko Case was there, this guy Rayland Baxter, and then there was this like party, rap-rock-electronic, Celtic band. That’s the most weird and cool part about playing with these groups—that it will never happen again. When we’re in situations like that, I always wish I was more of a musician in the sense that, I’m a songwriter but I play chords. Saying something like, “Oh, it’s in the key of C,” shred or do something cool, it’s a different mindset than playing music that you have time to learn and practice. You have to know it’s okay to screw up. Charity’s about the only one of us who can do that. She can hold her own improvising. 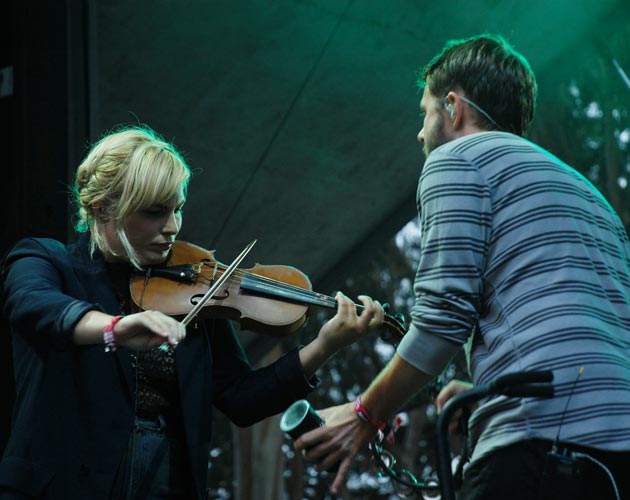 MJ: You produced your first album and sold it at shows. How’s it been producing a record with label backing?

JJ: There was never a thought of like, “Now we finished [the first album], let’s go find a record label.” We just thought “Oh, we finished it. We can put it up on iTunes and press CDs on our own.” And we did that and we just tried to play as many shows as possible and people liked it and kept talking about it and it started getting attention.

MJ: I have friends in bands who tour and are always hawking CDs, and you want to be supportive of your friend but you’re thinking to yourself, “I can’t believe you do this every night.” What is that like, playing your hearts out every night with the hopes of selling a few discs?

JJ: Well, when you create something and believe in it and you believe that other people should hear it, those inconveniences that you go through don’t matter.

CRT: It’s important that you love doing it. It is like a part of you, especially in the early days. We’d be sleeping in a venue, or sleeping on floors with random people we’d meet, and you’re so excited to play music and have people watch. Those were the glory days early on. You’re starting out and you’re so hungry.

MJ: When did you guys realize that you’d stuck a chord with audiences—that you’d made it?

JJ: For me there was never a breakthrough moment.

CRT: When we started selling out shows—small shows, but selling them out nonetheless. That buzz and energy was just invigorating.

MJ: Where did the band name come from?

“We are doing what we know we’re supposed to be doing, but it doesn’t mean that everything is perfect.”

JJ: I came up with the name, which came from sort of growing up with a very traditional, non-artistic, hardworking family. The idea was like you go to high school, you do well so you get into a good college, you start dating someone, you graduate, you get a job, you marry the person—which is all great, but I was going along that route and it was supposed to make sense and it just didn’t feel right. I started realizing that being in bands was going to not be just a hobby, but what I was going to do with my life. And though your head is telling you to be stable and find a good job, you know in your heart that this is what you’re supposed to do even if it’s crazy. It’s a balance of weighing out things out.

MJ: On your new album, you seem to be exploring that notion. You’re touring heavily, but on the title track, for instance, you ask a sweetheart or a friend to just stand still with you for minute.

JJ: The first album, in my mind, was very idealistic and slightly naïve in that sense that it was like, “I’m going to quit my job and move somewhere else and do what I want to do and everything will be wonderful and great.” There are sacrifices, you know? We’re doing what we love, but we’re still gone all the time. You know, like having a girlfriend, you have to balance your relationship. Something is lost and sacrificed for you to be able to do what you’re doing. The new record looks at that weird balance. We are doing what we know we’re supposed to be doing, but it doesn’t mean that everything is perfect.

Let’s Be Still comes out October 15. Here’s the lyric video for the single “Another Story.”