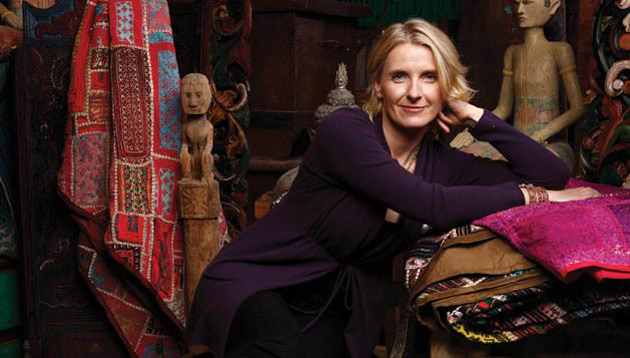 IF ANYONE CAN MAKE a story about a spinster who devotes her life to the study of mosses read like high adventure, it’s Elizabeth Gilbert, who published three critically acclaimed works of fiction and biography before she turned her own pizza-eating, meditating, soul-searching travel exploits into the 2006 bestseller Eat, Pray, Love. Next came Committed, a follow-up memoir that explores her ambivalence toward marriage, and At Home on the Range, a cookbook of her great-grandmother’s recipes.

In October, Gilbert will unveil The Signature of All Things, her first novel in 13 years. The book’s protagonist is Alma Whittaker, the homely, overeducated daughter of a wealthy Philadelphia plant trader who spends most of her life practicing bryology on her father’s estate before embarking, at 51, on a journey to unlock the mysteries of evolution.

“What can you do as a woman with your tremendous intelligence and education when you can’t leave?”

For her own research, Gilbert delved into the writings of Charles Darwin, Asa Gray, and other great naturalists of the time—and, to get a sense of the common parlance, she pored over the correspondence of scientists who rattled off informal letters the way we send emails. Some of the novel’s wryest moments, though, come during flashes of modernity in which Alma expresses herself with a Liz Lemon-esque exasperation. I caught up with Gilbert, 44, to talk about her travel bug, 19th-century feminism, and the vexing tendency of creative women to sabotage their own work through the pursuit of perfection.

Mother Jones: Alma is a wonderful character. How long has she been kicking around in your head, studying botany, gathering mosses?

Elizabeth Gilbert: I did three years of research before I started writing. It was just like developing a photograph very slowly. I knew I wanted to write a woman’s story. I knew I wanted to write about 19th-century botanical exploration. I knew she was going to be an explorer of the mundane and the overlooked. I was struck by the idea of what they called “polite botanists” back then, women who for the most part were unable to travel. Darwin and [Alfred R.] Wallace and numberless other naturalists were able to climb mountains and explore valleys and go spelunking and do that sort of research in the jungles that leads to the taxonomical advances. But she was a woman and she was tied to her father and she couldn’t do that. I think the fundamental question I had was: What can you do as a woman with your tremendous intelligence and education when you can’t leave? Her work in the mosses is kind of like hyper-intellectualized needlepoint—the small domestic arts that women were able to do to keep themselves from going mad from boredom.

MJ: Would you consider her a feminist?

EG: I would, but she wouldn’t, because I have that language and she didn’t. I am a feminist and I consider the book a feminist novel, but I wanted the thing that prevents her from publishing her grand theory not to be misogyny but her own perfectionism. I feel like that’s a much more realistic character flaw. It’s also something that holds women back from presenting their ideas in the world, often because they wait until it’s perfect. It doesn’t stop men from bringing forth all kinds of half-assed and ill-formed notions, but it seems to stop women.

MJ: What did you learn about the “polite botanists”?

EG: Admired female botanists, and there were several, tended to be the daughters or the wives of admired male botanists, they tended to be independently wealthy, and they tended to be spinsters. That seems to be the magic formula to give you the closest thing to the semblance of a man’s freedom in the 19th century. That prosperity that Alma was raised in gave her liberties beyond what other women at the time would have had. Money is almost as good as gender.

MJ: You’re attracted to these restless, wandering types, and you’re kind of that way yourself.

MJ: Alma’s father, Henry, basically advises her: Don’t believe what anyone says—go and find out for yourself. Did someone tell you that?

EG: No. That’s the ultimate rule behind all science: Don’t trust what you’re told—go find out. My dad would’ve said something like, “Keep your head down. Don’t draw attention to yourself. Don’t overpromise!”

MJ: You write about travel with such optimism. As a traveler, did you ever feel incredibly lonely or totally freaked out?

“I think it’s particularly important for women, and especially for young women, to learn how to be lonely.”

EG: Oh my God, yes! Mostly that. There’s no loneliness like the loneliness of traveling alone. And there’s particularly no loneliness like the hours after you’ve had dinner and you’re by yourself in a foreign place and you’re sort of like, “I can’t go to bed, it’s 7:30!” But I think it’s particularly important for women, and especially for young women, to learn how to be lonely and to move through it and come out on the other side and see that you’re intact—and to then have the power to decide whether you actually really want to be with somebody. Because if you’re living in fear of being alone, that will cause you to make all sorts of rash moves in that department.

EG: I wish I had taken it when I was 20, but we all learn when we have to learn.

MJ: So do you ever get world-weary—not sick of travel, but just happy to stay in one place?

EG: Yeah, and I get sick of travel, too. In fact, one of the things that began to inspire the novel is that I’ve been traveling and sort of spinning around so much that I’ve never come to know one place really well, and I wondered what it would feel like. When I grew up I lived next to a dairy farm, and when the wife of the dairy farmer died I went to her funeral, and some of her sons said she knew every inch of that farm—every flower, every tree, every bird, every blade of grass—because she had lived there for all 95 of her years. And I remember thinking, “They ain’t going to say that about me at my funeral!” But I go through periods where I long for that. And then sometimes I want to burn everything down and run.

MJ: You and Alma both had the means to embark on a soul-searching quest. What’s your advice to someone without the means—or the freedom?

“I have a friend who’s in prison right now. Actually, he was my prom date.”

EG: People ask me that a lot, and I always start by clarifying that I hope Eat, Pray, Love isn’t being read as a prescription. The first trip I ever took, I was 16. I went to Russia, when it was still the USSR, with babysitting money I saved for three years. That’s how I’ve always done it. Now I have much bigger resources, but travel has always been the single most important thing for me. You can do smaller versions of it and you can explore your own environment as much as you possibly can. But there are tons of substitutes for looking for personal enlightenment that don’t involve getting on a plane to India. Meditation is available to everybody and introspection is available to everybody. I have a friend who’s in prison right now. Actually, he was my prom date junior year of high school, and he’s just where my mom said he was going to be. And he’s exploring these questions from within a 10-by-10-foot cell. He’s on the journey of a lifetime because he decided to be on the journey of a lifetime.