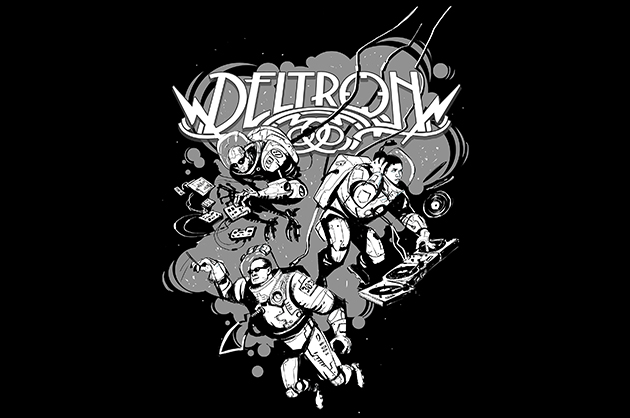 Deltron 3030—the hip-hop dream team consisting of rapper Del Tha Funky Homosapien, producer Dan The Automator, and DJ Kid Koala—dropped its first album in 2000. It was a tough act to follow, a dystopian sci-fi concept album that paired social commentary with mech soldiers and a climactic intergalactic rap battle. So they didn’t follow it for 13 years. There had been discussions and false starts, sure. But the group wasn’t in the right place, Dan told me, until something clicked. “Del calls up one day and says, ‘I’m ready to go,'” he says. “It just happened to be years later.”

Event II, Deltron’s long awaited new releases, is out today. So how does a super-group reconvene and create a follow-up to one of alternative hip-hop’s most beloved records? The Automator agreed to walk us through the process, complete with behind-the-scenes videos explaining the creation of Event II‘s third track, “Pay The Price.” Let’s begin…

After meetings with the rest of the group to talk about sounds and potential subject matter, Dan The Automator heads to the studio to record the underlying tracks for the album. He lays down somewhere between 30 and 50, and then sends the best of them over to Del, who’s soon ready to come in and record his vocals. “When he’s on point, he can do it almost on the spot,” Dan says. “He’s a genius in that way.”

But it’s not as though there’s no preparation involved. While The Automator cuts tracks, Del reads science fiction and researches current events to pin down his storyline. The new record draws from more than a decade of political events, from 9/11 and the war on terror to the economic collapse and Occupy Wall Street. Event II is more political than Deltron’s first recording, according to The Automator. “The idea of talking about the future means you have to compare the past,” he says. “Right now, some people are on some crazy shit. It’s like the Hail Mary for nut jobs.” In “Pay The Price,” one villain whose idea of equality is “one for you, more for me” pleads for his life by saying, “Please! My offspring voted for the first black president!”

Once the vocals are in, the tracks are reworked. This can be as simple as adding sonic accoutrements—like the carillon sounds below—or as complex as reimagining an entire beat or melody. No matter what the extent, The Automator bases his changes on what he calls “the Deltron feel…I go by feeling,” Dan says. “If it’s right, it’s right. But I leave a lot of space for it to get right.”

Additions like the carillon, strings, horns, and choir bits you’ll hear on the album, come courtesy of Dan’s classical music background—he grew up playing violin. “It’s like scoring a movie,” he says. “We’re trying to make it emotionally as appealing as possible.”

So what’s the biggest misconception about this part of the process? “People think I do a lot of drugs when I make records,” Dan replies. “I don’t do any drugs.”

The Deltron feel is the result of close collaboration. While plenty of groups send tracks back and forth among members, Deltron 3030 always comes together for the studio work. “If you just take what I do and what they do and put them together, you get a 1+1=2 kind of equation,” Dan says. “You have no interaction, no back and forth, push and pull; 1+1 is boring.” Between the three men—and guests like Joseph Gordon-Levitt, Zach de la Rocha, David Cross, and The Lonely Island—a single story and album slowly emerges. “We’re not going, ‘Is this one a hit? Are kids using these words right now?'” Dan says. “None of that stuff takes place in our world.”

Once a track is recorded, all that’s left is the mixing. The entire, meticulous process takes four to six months, not counting the 13 years of planning. The end result, Dan says, is “way better” than the first record. “I love the first one, don’t get me wrong here,” he adds. “I think Del and I and Eric [San (Kid Koala)] are all people who work to keep it moving and not be satisfied with what we have.” Still, the basic process itself wasn’t all that different. “It was kind of business as usual,” Dan says. “I just got to be me and hang out with a lot of my friends.”