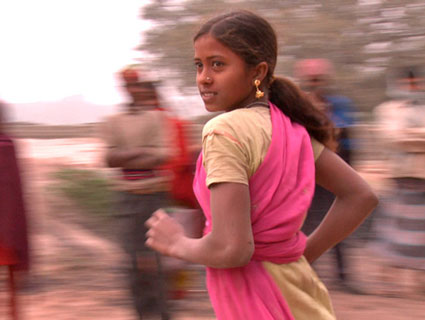 One day while playing around on Google Maps, children from a squatters’ village in Calcutta discover that their neighborhood has been completely overlooked by the digital mapmakers. Urged on by their teacher, Amlan Ganguly, they decide to create their own map for the community of 9,000. That’s just one way Ganguly pushes them to question their lot.

In The Revolutionary Optimists, Stanford filmmakers Nicole Newnham and Maren Grainger-Monsen follow the story of Ganguly, a pied-piper figure who left his job as a lawyer to find more meaningful work through his foundation Prayasam. They chronicle his efforts to turn the kids into mini-activists. The film opens with Salim and Sikha, two of Ganguly’s bright-eyed disciples, who walk the streets of their slum speaking to friends, neighbors, and anyone who will listen about the problems their community faces. They enlist other children to act as town criers to get out the word about polio vaccines, meet with local officials about getting a potable water hookup to serve the village, and work together to transform a trash heap into a soccer pitch for the community.

Ganguly tries to instill in his students that they can break away from the paradigms enforced by poverty. But an entrenched caste system, glacial bureaucracy, and cultural inertia make it an uphill battle. India boasts the second fastest growing economy behind China, but it also has more child laborers than any other country in the world. One-third of all girls are pulled out of school by the time they are 11, and many are quickly married off to older men. In describing the odds his son faces, Ganguly’s father invokes Martin Luther King Jr.’s “Dream” speech: “That dream included eradication of poverty in the land of plenty,” the old man says. “Amlan…” he continues. “has to [do] this in the land of nothingness.”