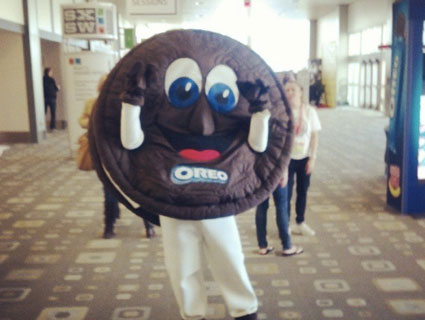 The future of digital!Nick Baumann

The giant plush Oreo is friendly enough—it waves its stubby, T-Rex-scale arms when it realizes I want to take a photo. We are at South by Southwest, the annual music, film, and interactive (read: tech) festival that’s drawn huge crowds to Austin, Texas, for more than 25 years now. I’m here to figure out how to convince more people to read MotherJones.com so we can sell more ads. The Oreo is here to sell more Oreos.

Almost everyone at South by Southwest is here to sell you something. Much of the conference is about marketing—and you’re the mark. The guy who promises to teach you how to make your videos go viral is gunning for a cut of your resulting YouTube ad revenue. The folks who claim to know all about social-media metrics want you to subscribe to their service, which tracks social-media metrics. A woman who has “spent her groundbreaking career redefining orgasm” wants to sell you classes in orgasmic meditation. Nearly every panelist has a book to sell, too. Al Gore wants to sell you on the idea that his sale of Current TV to Al Jazeera, an international news network backed by a Middle Eastern petrostate, somehow dovetails neatly with his climate change crusade. (He also wants you to buy his book.) The internet security company CEO who’s warning you that “you are exposed” wants you to persuade your company to buy his web security services. (He has a book, too.)

You can’t walk more than a block near the Austin Convention Center without someone trying to get you to download their app. LevelUp lets you pay for $3.50 Pepsis and $7.00 sandwiches with your phone. Hater, an app that takes seriously the tongue-in-cheek argument for a Facebook “dislike” button, lets you “share the things you hate.” I’ve counted at least four different taxi-related apps. The startup apps are promoted by nervous young women in colorful T-shirts, or pedicab advertisements, or giant foam mascots, or just signs taped to trees, or all of the above.

The kings of the SXSW salesmen are those who don’t have to fake enthusiasm for what they’re selling: They’re not paid $12 a hour to twirl a sign around or dress up in a foam suit or ask strangers to download apps. Elon Musk wants to send your satellite into space. Bre Pettis hopes you’ll to buy a 3D printer for your kid, so she can make her own plastic toys and grow her imagination. By the way, Pettis’ MakerBots start at $2,200. 3D printers are undeniably cool, but it gnaws at your soul to watch a speech and realize you’re sitting through a dressed-up infomercial for a product few Americans can afford.

“SXSW As Cool And Real As It Gets, Reports Marketing Associate,” the Onion snarked on Monday. But even the marketers realize what’s happened here. SXSW is now “as much a marketing event as it is a tech gathering,” Digiday, a digital media and marketing website, proclaimed Monday. Digiday’s coverage of the conference was—no joke—”sponsored by Centro,” which is “a provider of media services and software that aims to improve campaign performance and digital media teams’ productivity,” whatever that means. How much Centro paid for the privilege isn’t listed on Digiday’s rundown of the costs of different SXSW marketing maneuvers.

The constant SXSW marketing is most obvious at the interactive conference, but it extends to the music and film portions, too. The smaller bands are here to score record deals. The indie filmmakers are here to sign distribution deals. The big bands here are half hidden under the coattails of their sponsors: Passion Pit, brought to you by Taco Bell. When Jay-Z was here last year, you had to have an American Express card to attend the show.

For a gathering so driven by the pursuit of money, the question of who has it—and who doesn’t—goes almost completely unmentioned. There are talks about social and civil rights issues—feminism, race, female genital cutting—but words like “inequality” literally aren’t on the schedule. (A search for “taxes” returns a session that mentions how awesome it would be to have a robot who could do them.) Maybe that’s because everyone knows that almost everyone here coughed up several hundreds of dollars for a conference pass, and hundreds more for lodging. Conversations about inequality are awkward. Conversations about futurism, tech triumphalism, entrepreneurship, and the “intersections” thereof reign supreme. There’s almost no talk of religion, electoral politics, or labor unions—anything that smacks of old-school collective action. This is a place of unfettered technological optimism, where coders and entrepreneurs can solve any societal problem. SXSW has a politics, but it’s one that mirrors the technolibertarianism of the Reddit generation: civil liberties (read: free speech, Larry Lessig, and Aaron Swartz), entrepreneurship, and individualism.

Maybe it’s unfair to expect a conference that’s essentially a glorified trade show to concern itself with a broader sort of politics. But SXSW is a big deal: Hundreds of media outlets cover it, and its overall tone sends a message to attendees and the broader culture. And too often, SXSW’s focus on buying and selling can devolve into self-parody. One Tuesday panel promised to teach entrepreneurs about “engaging government” for “fun, profit, and meaning.” On Sunday, Dan Wagner, the chief analytics officer for President Barack Obama’s 2012 presidential campaign, joined Zac Moffatt, the digital director of Romney for President, and two of their former colleagues, for a panel about how they culled electoral, internet usage, viewing habits, and other personal data to better target potential voters. Tom Serres, a former Romney aide on the panel with Moffatt and Wagner, made sure everyone knew about his new online fundraising startup, which is neither indieGoGo nor Kickstarter, but a third thing that is somehow different. The audience, meanwhile, evinced no apparent revulsion towards the idea of national political parties collecting intimate details about the eating, drinking, TV watching, pleasure reading, and weekend relaxation habits of average Americans. Another panel asked whether “crowdfunding can save local government budgets.” Maybe one local government budget: The total amount pledged to all Kickstarter projects in 2012 is about $7 million less than Detroit’s 2013 budget deficit.

There are things to love about SXSW. The food is even better than you’ve been led to believe, there are lots of movies and bands to see, and Passion Pit put on a great show, Doritos® Locos Tacos and all. There are many sincere, interesting people here—although it’s often hard to talk to them in the context of the conference itself. (I found myself learning a lot more while sharing meals with people than I did going to panels.) If your phone doesn’t have enough apps, that problem will be solved. And hey—free Oreos! Did I mention my startup? We have an app. You can buy my boss David Corn’s book here.