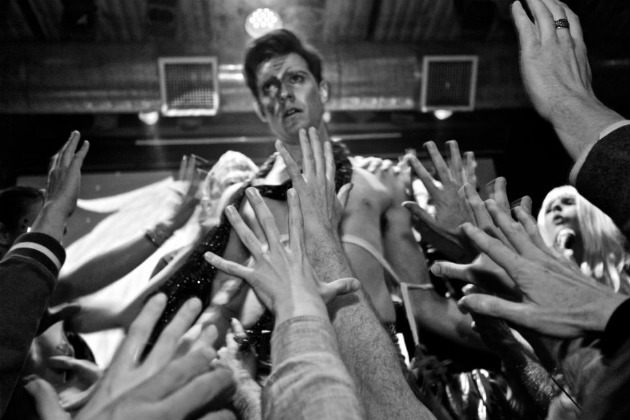 Channeling Bowie: An impersonator performing with the First Church of the Sacred Silversexual. Karen Knoller Photography

Bryn Laux can’t wait to hear track 3 of David Bowie’s new album, The Next Day. Track 3, she tells me, is almost always the panty-dropper.

In case it’s not obvious, Laux is not a music critic. She is a fan. A really, really, big fan.

I’m hanging around with Bryn for a reason. I figured if Bowie wasn’t going to give interviews or tour to promote his first new album in 10 years, I wanted the next best thing: I wanted to listen to The Next Day for the first time with a David Bowie cover band.

Bryn is a member of the First Church of the Sacred Silversexual, a San Francisco-based ensemble that performs rock-opera like “sermons,” peppered with an occasional burlesque number, that tell two- to three-hour-long stories consisting of Bowie songs. Tonight Bryn Laux is Bryn Laux, but every so often she dons elbow-length gloves and transforms herself into Careless Cadence, a singing, tap-dancing, glitter-and-lipstick-bombshell who sings everything from “Space Oddity” to “China Girl.” Major Tom is a band member, too, but he’s not around tonight.

This is them, by the way:

“Is it ridiculous that I like to think of him as Ziggy?” Bryn asks at one point. “I like to think about it like he’s this actual interstellar human cyborg.”

No. Not ridiculous. Or okay, maybe it is, but surely others have thought the same. Bowie’s electric relationship with his listeners defined his career, from the rousing success of Ziggy Stardust to the rapid demise of the Great White Duke. This is a man who responded immediately to his first piece of fan mail from America, for Chrissake. Then about 10 years ago, he retreated from the public eye, choosing to hide in plain sight in a loft in New York City.

I knew I’d found the band’s space when, from half a block away, I heard synthesizers pounding out “Let’s Dance.” The First Church of the Sacred Silversexual practices in a typical, if somewhat underwhelming, garage in the city’s Mission District. Peter Fyfe, the “church’s” reverend and founding member, greets me on the sidewalk where he and five bandmates, all in their 20s, are drinking cheap Mexican beers out of cans and smoking cigarettes.

Fyfe is tall and lean, clad in a gray hoodie and a pair of Air Force Ones tricked out with a coat of silver spray paint. We settle in around his laptop, which is hooked up to an old stereo. A debate ensues: Should we listen to the album all the way through and talk about it afterward, or should we do it track by track? Guitarist Adam Dragland favors the former. Jillian Darling, one of the group’s three backup singers, has spent all day working at an advertising firm and would prefer to be able to talk for a change.

In the end, they choose the listen-first approach, which falls apart almost immediately. Thirty seconds in, everyone is offering up their analysis of the title track, which draws comparisons to Bowie’s 2003 album Reality, earning points for being “not as flashy”—a brave move from a former glam-rock icon.

These calculations are pretty geeky. I’m constantly aware that my fellow listeners are armed with a deep arsenal of Bowie trivia they will deploy in order to help them decipher, with varying degrees of accuracy and creativity, what Bowie is trying to say to us. Some of the Silversexuals mill around Fyfe’s old laptop looking for lyrics, while others stand back a bit and bounce their material off of one another: “Dirty Boys” is a funky, Tom Waits-like number, they agree, and their drummer’s going to flip when he hears the sexy-as-hell drum solo on “Love Is Lost.”

Turns out the pantry-dropper is track 7, “If You Can See Me,” an aggressive number where Bowie crows: “I will slaughter your kind who descend from belief/I am the spirit of greed/…If you can see me, I can see you.”

Everyone loves it except Jillian. She just hates it. “What’s this shit?” she asks.

“I’m totally into this.”

The dancing doesn’t start until the second half of the album. “Dancing out in Space” sets off some tapping, and by the time Bowie’s voice comes in on, “How Does the Grass Grow,” everyone is channeling Bowie, their chests puffed and their arms snapping around. The girls make eye contact and sing along with the back-up vocals, “La-la-la-la-la-la!”

“You Feel so Lonely You Could Die,” the closest thing on the album to a classic Bowie ballad, is the other song that stands out, and the first one we circle back to once the listening is through. It’s another to sing along to: “You could die-ie-ieeeee!”

I glance around, taking in the band. Their entire idea of a Church of Bowie seems pretty absurd, right? Yet it reflects the relationship we millennials have with our parents’ generation—most likely, we will have to worship Bowie via laptop or gadget, never live, and never young—and the fan’s relationship to David Bowie, the man who became a rock god by sweeping his listeners up in a cult of androgyny, space travel, and counterculture.

And the verdict of the congregation of the First Church of the Sacred Silversexual? They love The Next Day. Or rather, they will try to grow to love it. It may lacks the brashness and punch of Bowie in his youth, but it has a complexity and an “earthiness” that, to really appreciate, will take a little…Time/He’s waiting in the wings/He speaks of senseless things/His script is you and me, boys.

Here’s “Where Are We Now?” from the new album…