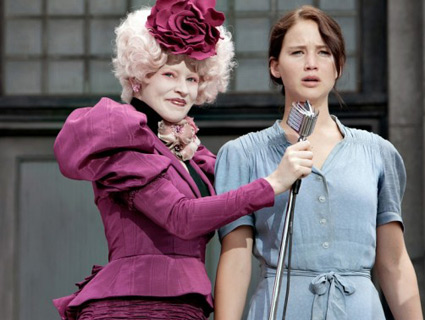 Like I said, it's North Korea, but with white people.Photo courtesy of <a href="http://www.thehungergamesmovie.com/?section=photos&item=6">Lionsgate</a>

You know the feeling you get when you wrap a waist belt around your femoral artery and tauten it until you start to experience fatigue, discomfort, and extreme frustration? Such is the sensation derived from viewing the lavishly praised and mega-hyped adaptation of The Hunger Games.

The film—a big-budget production based on Suzanne Collins’ young-adult bestseller—has already been touted as a lot of flattering things: An accessible, pop-culture-primed indictment of communal bloodlust and the totalitarian mentality. A feminist kill-fest. The next Twilight.

In one way or another, The Hunger Games does indeed hit all the above. But once you peel back the blockbuster ballyhoo, what you’re left with is a surprisingly flat first installment in the inevitable series—one that neither cuts deep with its emotions, nor exhilarates with its carnage.

For more on The Hunger Games, check out Maddie Oatman’s review of the soundtrack, which feature songs by Arcade Fire and Taylor Swift.

Some basics for those unfamiliar with the trilogy: The film follows the street-wise heroine Katniss Everdeen (played by gifted newcomer Jennifer Lawrence), who resides in District 12 of Panem, a dystopian realm comprising the cash-flush Capitol and an archipelago of impoverished, starving provinces. Government “peacekeepers” roam these “districts” to enforce President Snow’s iron-fisted rule and cut out the tongues of dissidents who attempt to flee. The plebeians are forced to eat squirrel meat and stale bread. Meanwhile, everyone in the metropolis indulges in the finest wines and dresses like they’re starring in Madonna’s Super Bowl half-time show.

And as punishment for an armed rebellion against the plutocratic regime, the districts are required to annually fork over one girl and one boy, aged 12-18, to compete in a nationally televised contest that’s sort of like Survivor: All-Stars meets the New Mexico State Penitentiary riot. The children are then shipped off to the Capitol, trained, groomed, and set loose in the unforgiving wilderness to hack each other to death until there’s only one survivor.

So Panem is North Korea, but with white people and better reality TV.

For anyone who’s even skimmed the book, the most conspicuous change in its move to Hollywood is the dampening of the graphic content. On the page, the gore flows freely and profusely. At the multiplex, the butchery is obscured by wobbly camera work and careful edits, to accommodate a tween-friendly PG-13 rating. (I can’t imagine why *.) By doing so, the movie defangs the lurid hook of the novel, sanitizing the set pieces of child-on-child barbarism. What should be disturbing and grotesquely riveting is reduced to what amounts to the visceral pangs of a Vampire Diaries episode, sapping the adrenaline and cheapening the prolonged killing.

Director Gary Ross orchestrates the action and the human drama accordingly, falling into nearly every trap of lazy storytelling and phony sentiment that he sets for himself. For instance, when one of the more likable contestants (known as “tribute”) takes a spear to the solar plexus, you realize the character wasn’t developed enough to warrant any tears shed. When the Aryan-looking bully-boy tribute named Cato is eviscerated by mutated boars, it feels more like a throwaway from Resident Evil gameplay rather than a moment of any consequence. And when Katniss finds true love with fellow District 12er Peeta Mellark (Josh Hutcherson) in the heat of the Hunger Games, the development is hobbled by a shocking deficit in chemistry between the stars.

The movie is also torpedoed by its uncanny knack for neglecting and wasting its talented ensemble. The fiendishly good Stanley Tucci, Elizabeth Banks, and Toby Jones are relegated to thinly sketched, dullsville personalities, leaving them little recourse but to phone it in as cheerful regime stooges. Teen actress Isabelle Fuhrman, who delivered an Oscar-caliber performance in 2009’s Orphan, is barely a glorified extra. And Donald Sutherland, in portraying Panem president Coriolanus Snow, should have been given opportunity to explore the fascist impulse that drives the ruthless dictator; instead, his presence is about as menacing as that of Morty from Seinfeld. (Only Jennifer Lawrence and Woody Harrelson—as District 12’s Hunger Games “mentor” Haymitch Abernathy—are afforded the chance to craft nuanced and dexterous performances.)

By the end of its interminable two and a half hours, The Hunger Games falls short in pursuing all available avenues: It isn’t convincing enough to move those looking for naked emotion, political enough to please those in search of biting commentary, nor even stirring or hard-boiled enough to masquerade as a serviceable action vehicle. Those who had been expecting this to be our generation’s Blade Runner will quickly find themselves struggling with the same reality that befell those who were once convinced that M. Night Shyamalan would be the next Hitchcock.

With all the anticipation and rabid fandom surrounding the movie, it is a minor tragedy that the filmmakers took on the incredibly risky subject matter with a complete and utter aversion to risk.

If you’re in the market for a terrific film that revolves around teenagers murdering one another, don’t buy local: Check out the badass cult flavor of Japan’s pair of Battle Royale movies (which many have long suspected were the original basis for the Hunger Games novels), or the crime-epic wallop of Brazil’s City of God.

The Hunger Games gets a wide release on Friday, March 23. The film is rated PG-13 for intense violent thematic material and disturbing images—all involving teens. Click here for local showtimes and tickets.