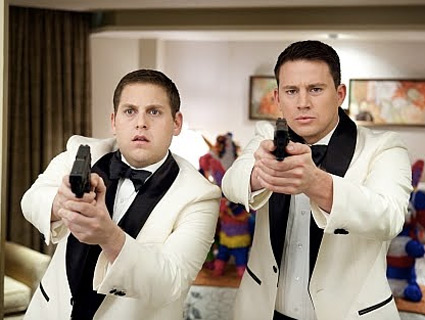 There’s a scene in this film where decades of moviemaking magic—from Balked at the Altar to Pocket Monsters: Mewtwo’s Counterattack—crystallize into one dynamic, surefire gag: Two undercover narcotics officers finally corner a drug-dealing madman. It took a messy, protracted car chase through the streets of LA—and a yachtload of ammo and stunts—to do it, but they got their man dead to rights. In an act of desperation, the criminal presses his pistol to the temple of a hostage. One of the cops takes careful aim, stiffens his posture, and drops a punchy catchphrase for justice:

You peaked in high school, motherfucker.

He squeezes the trigger and blasts a hole right through the man’s dick. The buddy-cops cuff him, taunt him, happy-dance around him, and boisterously read him his Miranda rights. Meanwhile, a penis lies disengaged on the pavement, looking like a rumpled, dehydrated old sausage. The perp—in shock—frantically attempts to pick his derelict dong off the ground, using only his teeth.

Enthralling cinema. A stunning indictment of the age we live in.

But seriously, 21 Jump Street actually is impressive in a surprising number of ways. For starters, the fact that it is good is in itself a minor miracle. A year ago, if somebody had walked up to you and said, “Yo, dawg, they’re remaking 21 Jump Street. You psyched?” the natural response would have been, “I’d rather watch molasses bake on a hot sidewalk.”

For the uninitiated: The movie is an adaptation of the identically named crime drama that aired on Fox between 1987 and 1991. The series revolved around a multicultural squad of twentysomething officers who went undercover at high schools and youth hangouts to investigate drug trafficking and hate crimes. It’s also known for launching the career of Johnny Depp. *

There’s nothing wrong with the original series; it truly was a hip, socially aware police procedural for disaffected Generation X-ers. It’s just that a reboot of a show so thoroughly enshrined by its cult following seems inherently unnecessary.

The big-screen version succeeds precisely because it ditches any trace of late-’80s nostalgia and reinvents the series with different characters and a completely different style.

The new 21 Jump Street moves the focus to rookie-cop duo Morton Schmidt and Greg Jenko. Back in the ’90s, Morton (played by the—ahem—Oscar-nominated Jonah Hill) was a sexless, metal-mouthed outcast at his high school. Greg (a never-better Channing Tatum) was a bully and a popular numskull. Flash forward a few years, and they’re best friends, fresh out of police academy.

After their horrendously botched efforts at parks patrol, their chief transfers them to the eponymous street to work undercover. From then on, it’s one outrageous, gut-busting sequence after another.

As Morton and Greg bumble their way to busting the synthetic-drug trade at a local school, they discover that youth culture has changed dramatically since The Chevy Chase Show went off the air. The in-crowd isn’t composed of jocks or meatheads, but of environmentally conscious, Ivy League-bound students. Their de facto leader, Eric (Dave Franco), makes friendship bracelets and considers competitive sports “fascist.” And the fetching Molly (Brie Larson, turning in her best performance since the first season of United States of Tara) has the hots for the mousy and cerebral Morton.

Thus grows the rift between the young partners, where Greg is relegated to chilling with tech-savvy nerds, and Morton gets the VIP treatment from the popular teens and the drug dealers.

All told, the film is a rush of crowd-pleasing vulgarity and bad behavior, elevated to a level of pop art.

21 Jump Street gets a wide release on Friday, March 16. It is rated R for crude and sexual content, pervasive language, drug material, teen drinking, and some violence. Click here for local show times and tickets.

* Yes, he has a cameo, and it’s actually pretty great. No need to worry.