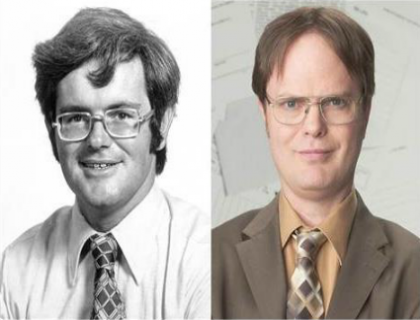 One of these is Newt Gingrich. Or maybe both. We just don't know.via The Other 98%

But the eerie similarities surely end there, right? I mean, one of them is mercurial, despised by his colleagues, in love with animals, obsessed with pop culture mythology and modern warfare, and wrapped up in an endless subplot involving a blonde love interest.

And the other one is Dwight Schrute.

Take this short Mother Jones quiz to find out if you can tell the difference between Newton Leroy Gingrich and Dwight Kurt Schrute III.

For the record: While many have chimed in on the physical resemblance between Newt and Schrute—BuzzFeed, The Daily Show, CollegeHumor, the Daily Mail, The Today Show, and even Rainn Wilson himself—we believe the news team here at MoJo actually started the Newt/Schrute meme. It all began with a Tumblr post on the night of a Republican presidential debate in November. The trend began catching on in December and January. (We’ll try to be modest about this, though.)

And if you need any further proof that these two men likely share DNA, check out their shared devotion to the Star Wars saga. Here’s the former House speaker gushing about how George Lucas’s series reflects the “core values in American civilization” (the video of Newt starts at 00:43):