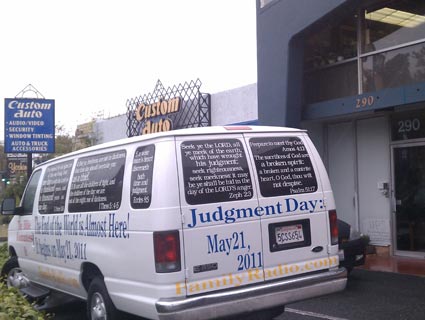 Two weeks and two days before the end of the world, Tom Evans does not lack for work. In the past few weeks he has fielded roughly 400 interview requests from news outlets around the globe, a number that continues to rise as Judgment Day draws near. Jesus, he says, commands his followers to “occupy until I come.” Evans is occupied. He moves continuously around the Family Radio station headquarters in Oakland, California, cellphone ringing every few minutes. He must determine how many interviews he can schedule before May 16th, the last day on which Family Radio founder Harold Camping plans to speak publicly about the impending Rapture. He must remember to change the lightbulb in the office hallway. He must locate supplies for his daughter Chloe’s third birthday party. “It’s a horse party,” he says, picking up a folding table from outside the station’s TV taping studio. “She loves horses.”

Broadcasting online as well as over local airwaves, Family Radio reaches at least 150 countries in 82 languages. For the past year the 89-year-old Camping, a Berkeley-trained civil-engineer-turned-Christian-broadcaster, has used this platform to announce that the biblically preordained date of the Rapture is Saturday, May 21, 2011. The nonprofit station has paid millions of dollars for more than 5,000 billboards around the world affirming this fact: They tower over housing projects, flash on bright LCD screens over freeways, solemnly accompany riders of public transit. Every night people call Camping on his radio program, Open Forum, with questions about the end of days, and every night he assures them the end is nigh. He does not entertain queries about May 22. By extension, Evans refuses interview requests from anyone who wishes to follow up after the 21st. “What is the point of interviews at that point, except if you presume time will continue and things remain unchanged,” he wrote in his initial email to me. “To presume it will not happen is a very grave presumption indeed.”

The station is located on Hegenberger Road, a commercial strip out by the Oakland airport, next to a sushi restaurant and behind a restaurant called The Hegen Burger. It’s extensive, though not ostentatious; if not for the satellite dishes on the roof, you could easily miss it. The nonprofit had $72 million in assets in 2009 (the most recent year for which financial records are available), and holds several lucrative FCC licenses. A sizable chunk of its funding comes from donations. All this, says Evans, shows that God has favored them.

The station has about 350 total employees, though only a fraction of that number are on site at any given time. The ones who are seem eager to get their message out through all available media; the station is filled with people wearing some combination of Judgment Day T-shirts, Judgment Day baseball caps, and Judgment Day windbreakers. A calendar of paid staff holidays posted in the lobby has a thick black line drawn between Easter and Memorial Day. 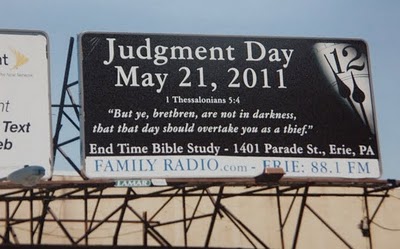 Though Camping has not wavered in the certainty of his message, neither have staff made plans to cease broadcasting. Evans says this simply reflects a desire to be good citizens. “We’ll just let God stop it whenever He’s going to,” he says. “We suspect it will be around 6 p.m. our time.”

“It” will be a major earthquake that works its way from west to east around the world. As the souls of the saved disappear, those not so lucky will be left to suffer and spend the summer slowly dying off. The Earth itself will cease to be on October 21. Asked to describe what this moment means for believers, Evans offers a sports analogy: “Remember Coach Walsh, from the 49ers? They won the Super Bowl—that’s the pinnacle of the sports world. Walsh was respected, had wonderful friends, a wonderful family, he was an articulate person, a gifted coach. Most people would envy his life. But he died.” He pauses to make sure this sinks in. “I don’t know if he was a Christian or not, but if not, well…all those great things are just gone.”

Evans, 55, hails from Southern California and is the third of nine children. His siblings, he says, run the gamut of political belief; his mother has been known to keep Mother Jones in the house. He began listening to Family Radio while working nights as a student at UC-Berkeley, studying Puritan theology. “I’d been reading the Bible for several years, but Mr. Camping was speaking my language,” he says. He grew to admire Camping’s “unique perspective” and accepted a job as a station producer when he finished school. Finding that sitting in a control room all day didn’t suit him, he soon took over as facilities manager (hence his attention to the lightbulbs).

Camping predicted the end of days once before, in 1994. The appointed date was September 6. Evans still remembers it. “I remember sitting with a friend, and we waited,” he says. “It didn’t happen, obviously.” Camping attributes the error to an incomplete reading of the Bible, an explanation that seems to satisfy his followers. For his part, Evans says he was not disappointed when Jesus did not come. And anyway, “2011 is distinctly different. There’s no Plan B.”

With just four days until the end, Evans has moved from attempting to accommodate reporters to actively dissuading them. “When do you plan on airing this?” he demands of the woman from Fox on the other end of the line.

Over the years, Evans has filled many roles, but he has been a media representative for only six months. He acknowledges that this is a particularly trying six months during which to be media representative. On May 17 he arrives at the station in a navy blue zip-up sweatshirt, jeans and sneakers, carrying three-year-old Chloe and her hot-pink Barbie backpack on his shoulder. The horse party, he tells me, was a smashing success. He heads up to his office, a tiny room filled with file cabinets at the top of a set of dark, narrow wooden stairs. A framed map of Disneyland hangs over the desk. His phone rings again as he opens his laptop and turns on a DVD for Chloe, in which talking animals teach her how to spell.

With just four days until the end, Evans has moved from attempting to accommodate reporters to actively dissuading them. “When do you plan on airing this?” he demands of the woman from Fox on the other end of the line. Her cameraman is waiting in the lobby; Evans is annoyed that she did not confirm the appointment. “Look, today and for the remainder of the week we’re just going to basically prepare for Saturday. We’ve told the world, we’ve told everything about why we’re saying this. He’s done countless interviews. The information is accessible. It’s not like it’s a mystery.”

He pauses and paces his office, glancing periodically at Chloe, who is completely absorbed by the spelling movie. Evans and his wife have told their children about Judgment Day—they also have a seven-month-old son—but they leave out what Evans calls “the scary stuff.” (When asked what she believes will happen on May 21, Chloe looks up from the screen and answers, “Jesus!”)

Having settled matters with the woman from Fox, Evans calls Camping and reviews the morning’s media requests, pausing to stroke Chloe’s hair. There is a knock on his office door. “I’ll handle them. I’ll handle them. I’ll take care of that. You don’t have to worry about that. Alright? Alright, goodbye, Mr. Camping.” He gets off the phone and answers the door. A receptionist conveys another media request. He tells her to ignore it. “Yeah, I know, everybody wants to chat with somebody right now.”

“I’m looking forward to tomorrow,” he says, closing the door and falling into a chair near the window. Evans and his family will be spending the remainder of the week out of town, with friends. “We’ll just go to their home, and just pop popcorn, sit around, pray, I don’t know, go to the zoo or something.”

“I’m very honored that God would use me in this way that is very humbling to me,” he says, letting the phone go to voicemail. “But I don’t know if I could do this as a full-time career.”