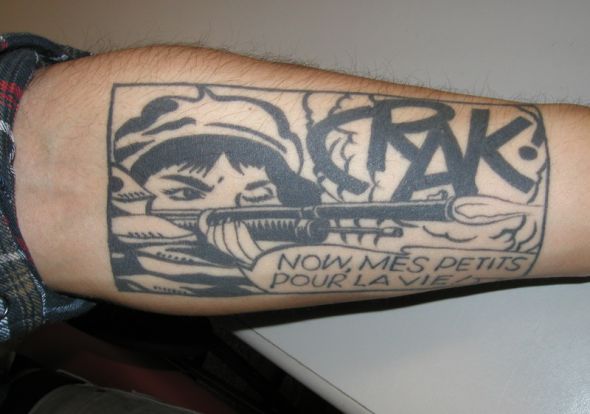 Never trust Helvetica, that Swiss troublemaker. She’s everywhere. She was on the arm of an interesting-looking young man in New York one day in 2003 when designer and typophile Ina Saltz spotted her in the flesh and couldn’t resist. Would you mind if I took a photo of your Helvetica tattoo to show my students? Saltz asked.

Two “intellectual” tattoo books later, Saltz is still fascinated by seeing typefaces on skin. Typographic tattoos are sexy, sensual. “Skin is a flexible, translucent medium,” she says. “There’s something visceral about seeing words on flesh that stops you in your tracks.” Body Type I: Intimate Messages Etched in Flesh, and Body Type II: More Typographic Tattoos, present photos and stories of these personal, permanent inscriptions.

Mother Jones: Do people send you typographic tattoo photos whenever the mood strikes them?

Ina Saltz: Oh yes, I get a constant flow from all over the globe. I just got a Kurt Vonnegut quote from an engineer: “So it goes.”

Friends especially love to send me links to websites where there are misspelled tattoos. But misspelled tattoos to me are tragic! They’re permanent! Can you get them lasered out? Yes. Will you have a scar? Yes. And many people who get a tattoo and change their minds will then get a bigger tattoo to cover it up.

That’s why I say to young people, look: I do not have a tattoo, I am never going to get a tattoo, I recommend that you think 10 times and wait years before you do, because it’s permanent.

MJ: You’ve mentioned that one reason you don’t have a tattoo is that you have a phobia about needles. Has documenting tattoos lessened that fear?

IS: No, not at all. My stomach still turns. If I see someone being injected on TV or in a movie, I put my hands over my eyes and say, “tell me when it’s over.” Really, I can’t bear it. When I was 14 all my friends were getting their ears pierced, and I went to the doctor and he put little dots on my ears and when he turned around to sterilize his needles I bolted. That’s as close as I ever came. When I need an injection, it takes all the strength I can muster.

I’ve gone to many tattoo conventions and seen people tattooed, but that’s different, it’s an electronic needle into the skin, and it’s not a long needle. You sort of see the head of the machine and it’s going repeatedly, almost like a sewing machine if you can imagine that. And it has a zzzz, ZZZZ sound, and that’s the overwhelming noise that you hear when you go into a tattoo convention, because there are lots of people being tattooed simultaneously. So that doesn’t bother me as much, but I could never endure it myself.

MJ: You’ve been a judge at multiple tattoo conventions. What do you look for in a typographic tattoo?

IS: I like to see crispness, clarity of execution, a sense that someone has placed and sized the art in a way that is harmonious with the shape of the body.

Japanese tattoo artists are justly celebrated for the exquisite skill and artistry of their work. The irony of course is that in Japan, tattooing is forbidden, and it’s the province of the Yakuza gangs.

MJ: Is tattoo art sufficiently celebrated as a genre?

IS: Well, Japanese tattoo artists are justly celebrated for the exquisite skill and artistry of their work. The irony of course is that in Japan, tattooing is forbidden, and it’s the province of the Yakuza gangs. Proper Japanese are horrified and would never get the tiniest tattoos, yet that’s where the finest tattoo art could arguably be placed.

More generally, I see a lot of good and a lot of bad, like any other artwork. There’s some amazing stuff being done, and there’s some horrible stuff being done. If anything the artwork has gotten better because a lot of the artists themselves have gone to art school. I know people who’ve graduated from Pratt [Institute] with MFAs who are now tattoo artists. Stephanie Tamez, who’s one of my favorite tattoo artists, did television graphics and was a trained designer before she was a tattoo artist.

MJ: When did tattooing start to go more mainstream?

IS: Tattooing has undergone all kinds of ups and downs in terms of society. There was a time when European royalty was tattooed, the British royal family in particular. When explorers came back from the Polynesian islands, the tattooed natives were such a novelty that it suddenly became very fashionable for the upper classes to get tattooed. Over the years it has cycled and ricocheted from being an upperclass phenomenon, to being a lower class phenomenon, and now I think it’s coming back up. I would say it’s across all classes now, there’s much less of a taboo. There are very educated, very sophisticated people getting tattoos, particularly the ones in my books. These are intellectual tattoos, high-brow tattoos. Almost without exception, every person in my book has at least a college degree or is in college, or getting an advanced degree.

Yes, there are subcultures of tattoos: Russian prison tattoos, gang tattoos, there are books. If you really want to get into it there are people implanting horns and forking their tongues. I am totally not interested in any of that. I’m only interested in the upper portion of the pyramid.

MJ: I’m considering getting an ampersand tattooed on my person. I prefer curlicues. Might you recommend a typeface?