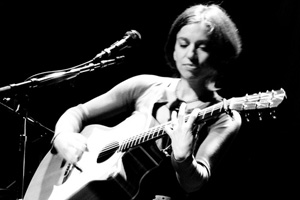 We recently reached out to a bunch of our favorite musical artists, DJs, and critics, to weigh in on the music they listen to themselves. We also asked some of our Facebook fans for their Best of 2010. Click on each artist’s name for the complete Q&A. (The few that aren’t yet posted will be up soon: Check the Riff every Music Monday—and follow Mother Jones on Twitter.)

We also asked some of our staff members and Facebook fans to suggest their top albums, songs, and videos of the year. Be sure and add your own favorites in the comments.

Tamara Beinlich: The Bob & Tom Show, “Grandma Got Molested at the Airport” and all the other anti-TSA songs by this guy.

Natasha Lahera: Two of my favorite bands, Kings of Leon and Interpol, let me down with their new albums this year so I can’t think of anything. I guess I’ll be cliche and say Lady Gaga.

Jason Winder: Swan’s Salt March, Grinderman’s Grinderman 2, and Hot Chip’s One Life Stand were the best I heard this year.

Josef Wittlich: Gogol Bordello’s Trans-Continental Hustle is good. Balkan Beat Box’s Blue Eyed Black Boy was good too. Both of those are a little different than the groups’ default sounds, but I guess we must always move forward.

Suggest your own 2010 favorites in the comments section, and click here for more Music Mondays.