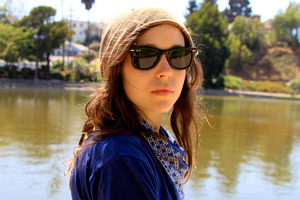 You probably remember Ellen Page from her Oscar-nominated turn as the witty, pregnant, teenager-next-door in Juno. Or perhaps you watched her in this summer’s mindwarping Inception as an adept architect of dreams. But if you want to find the 23-year-old Canadian actor in person, you’re more likely to see Page strolling through a farmer’s market in Nova Scotia than flitting through celebrity parties with her costars.

An environmentalist and activist, Page gets excited about permaculture, Bill McKibben, and ecovillages. She has narrated several issues-based documentaries, and recently appeared on CBC News to speak out against the use of a controversial biosolids being spread around her native Halifax.

Mother Jones spoke with Page recently about her green choices, her love of local squash, and her role as a psychotic sidekick in James Gunn’s dark superhero comedy SUPER, which premiered Friday at the Toronto International Film Festival.

Mother Jones: I get the sense that you exert no effort to be at home in the roles you’ve been cast in. Did you develop this ability by watching other actors, or by studying the craft very closely?

Ellen Page: I didn’t study it in any formal sense. I think I’ve just been extremely fortunate to work with really great people ever since I was ten years old. I’ve always been drawn to stories and telling them; whether it was through being a part of theater when I was a little kid, or film, or with music, there’s just been an innate desire to feel that connection. But I always feel a little silly when I try to explain it because I make it sound serious and dramatic, which I don’t think it is. It’s actually really playful, even when you’re going to those dark places. It’s a gift, because I get to have a job where I’m free to venture into those realms and I really like to embrace that.

MJ: You’ve acted in role after role that defies the normal stereotype of what a young actress plays: a pregnant teenager in Juno, an under-age temptress in Hard Candy, a psychotic comic book store clerk in SUPER, and soon a lesbian mechanic in Freeheld. What draws you to these roles?

EP: I don’t think it’s that conscious. It’s more when I feel a sense of truth—something sounds challenging or engaging, or like a journey I want to go on. It could just be blatantly getting to have fun, or getting involved in a comedy and the joy of that. There’s obviously a lot of tragedy in comedy; I really enjoy the paradox of what a really good comedy is.

MJ: I saw you recently on CBC talking about biosludge being spread over Halifax, and you were so informed and well-read. You seem passionate about environmental issues. Where do you get your environmental news?

EP: I’m a huge fan of the program Democracy Now, which is hosted by Amy Goodman, and I subscribe to the podcast. And I love the alternative journalism that’s available online; Alternet.org I really like, and Bill McKibben is one of my favorite authors. David Suzuki too—he’s very famous in Canada, less known in America.

I had the ability and the privilege to study permaculture at an ecovillage in Oregon and I met amazing, fearless, selfless people who are doing such incredible work that nobody hears about. I just met with students of a program called Future Generations, and got to meet Bill McKibben. And meeting people who are incredible, peaceful warriors doing the most unbelievable work all around the world, even though their bodies are at risk—they could be killed for what they do— it’s extremely humbling and makes me realize that I really need to step it up a notch, that we all need to step it up a notch.

MJ: So what’s something you do on a day-to-day basis that’s environmentally conscious?

EP: I find a lot of people say, “Oh organic and local’s expensive and I just don’t have time.” And I’m like, well how much TV do you watch? Where are your priorities right now? I always take the time to eat well and eat locally because it’s common sense. It just makes sense to my brain, and why wouldn’t I do it?

MJ: Have you done any permaculture yourself since being at the ecovillage?

EP: It’s hard because I don’t have a lot of consistency of place, which is kind of a key factor in permaculture: understanding where you live and the key patterns of the earth, even if it’s just your backyard. I’m trying to re-orchestrate things so that I’m able to practice permaculture in order to keep that alive in my day-to-day life. It’s nice because I’ve made connections in Nova Scotia, and can get my hands dirty, clean out goat pens.

MJ: You were involved in the US Campaign for Burma, spoke about the disappearance of bees in the documentary Vanishing of the Bees, and appeared in 2012: Time for Change, about alternatives to apocalypse. Why do you think it’s important to make time for issue-based documentaries?

EP: It’s about supporting people who are doing real, tangible work that’s opening doors to conversations we all need to be having right now. It’s just the way that it works, unfortunately. My coming on to narrate a documentary about bees that has already been made, but needs to get out there, allows a few more people to hear about it.

It’s about how we can all join forces. Scientists and religious leaders, activists and first nation leaders, CEOs of corporations and actors, all of us need to come together right now, because the planet is in a lot of pain. My job doesn’t always feel like an integral part of the change that needs to occur. If I can offer, in my profession, to do things that are going to allow more people to connect with certain issues, then I hope it’s useful. I do it always in an extremely humble, humble way if I’m not the person who’s done most of the work.

MJ: Are there other career paths you’ve considered, besides acting?

EP: Oh yeah, for sure. I mean, I’m only 23, so I think about that all the time. I’m really interested in permaculture and learning more about it, and in organic gardening, and in Nova Scotia having a sustainable food system. Every time I go to the farmer’s market, I kind of fantasize about growing food more.

I also have an immense respect for osteopaths. I know I sound crazy! I don’t think I would ever be able to do something like that, but I don’t know.

MJ: The newest movie that you’re in is SUPER, and you play a comic book store clerk and sidekick named Libby. What did you like about playing that character?

EP: What drew me to that role is that I had never really seen a role like hers before. She definitely has a sociopathic/psychopathic kind of tendency, and a very intense innocence matched with a very, very violent, angry side, and is just a bit of a little crazypot. It was really fun to explore that and jump in and embarrass myself and feel OK about it.

MJ: Did you read a bunch of comic books to prepare for the role?

MJ: I recently heard an episode of This American Life in which comedian John Hodgman is obsessed with the question: flight or invisibility? Because SUPER is a movie about superheroes, which would you choose, and why?

EP: Hm, wow. Well selfishly, flight, because obviously that must be such an unbelievable feeling. But invisibility, because I could just sneak into places and really find out the truth about so many things that I’d love to know, like conspiracy theories and what people really are like, and stuff like that. You know what? I think I might go with invisibility.

EP: I think it’s pretty simple. I just don’t think I’m special because I’m an actor and I never would. Of course I take what I do seriously because I love doing it, and I love being in films and making films, but I don’t take myself seriously. And I have a lot of gratitude for everything. I have amazing friends and awesome dogs, and I think it’s just about keeping things in perspective. It’s not just about acting for me. I care a lot about a lot of other things because I’m a human being on a planet in a lot of transition right now. And that’s kind of what my focus is on.