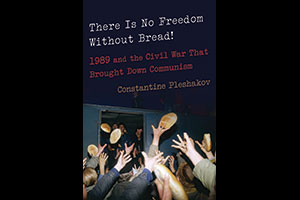 Ever since Ronald Reagan’s “tear down this wall” speech in 1987, many Americans have viewed it as the moment that precipitated the collapse of communism in Eastern Europe. Yet on the 20th anniversary of the fall of the Berlin Wall, it’s instructive to remember that Reagan’s address simply “did not cause much of a stir in the Soviet Union,” as Russian-born historian Constantine Pleshakov explains in this enlightening look at the last days of the Iron Curtain, as seen from outside the prism of American politics.

In his revisionist retelling, the collapse of communist rule had more to do with long-simmering local conflicts, such as Polish labor disputes, than pressure from abroad. “Rebellion was a domestic matter,” Pleshakov writes. Augmenting rich historical detail with pop-culture and literary allusions, he traces the decline of postwar communism from the 1956 Hungarian uprising and the 1968 Prague Spring through the rise of Solidarity and the disastrous Afghan war. He doesn’t write off the influence of the West—Richard Nixon’s 1959 visit to Warsaw drew a quarter of a million people into the streets, some cheering, “Long live Nixon!”—and he gives Reagan credit for inspiring Eastern Europeans. Yet his main protagonist is Pope John Paul II, whom he declares “a miracle” for his canny understanding of the social and religious forces that would spur Poles to revolt.

The book’s title, a play on a Solidarity slogan (“There Is No Bread Without Freedom”), emphasizes Pleshakov’s point that the “correlation between prosperity and liberty is never simple.” After World War II, many Eastern Europeans accepted the trade-off between liberty and the stability offered by communism. He’s not excusing communism, just correcting the idea that such a dichotomy could be easily stood on its head. As he concludes, “Free elections do not necessarily lead to more freedom and…the free market can impoverish a nation as effectively as central planning.”