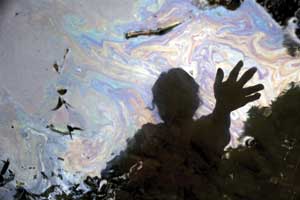 In this fascinating follow-up to his 2004 rockumentary, Metallica: Some Kind of Monster, director Joe Berlinger captures a dramatic legal showdown in the Amazon rainforest. Berlinger spent three years following a marathon multibillion-dollar class-action lawsuit in which thousands of indigenous Ecuadorians are suing Chevron for polluting their water and land, causing a wave of sickness and death. (The suit, now in its 16th year, was originally filed against Texaco, which Chevron acquired in 2001.) “Water is the life blood of the Cofán people,” explains an indigenous leader. “They came and spilled oil, contaminated the river, and my children died.”

Yet Crude isn’t your standard David vs. Goliath environmental film. It takes a sweeping approach, weaving together stories of the indigenous people and the lawyers fighting on their behalf, particularly a charismatic young Ecuadorian named Pablo Fajardo. The film’s most riveting legal moments take place in the rainforest itself, where lawyers make passionate open-air arguments during an inspection of alleged contamination sites. “When I say something, they have to think a thousand times to come up with a lie to counter my truth,” Fajardo says of the oil company’s lawyers. “They have to think much harder than me.”

Even as he takes pains to show how oil drilling has ravaged the lives of the rainforest dwellers, Berlinger lets Chevron tell its side of the story. The oil giant blames Ecuador‘s state oil company, which briefly ran the oil fields in the ’90s, yet also claims there is no evidence of any health effects. Its lawyers suggest that their scrappy opposing counsel just wants a piece of the potential payoff. Recognizing the complexity of the case, Berlinger doesn’t take sides, but Crude leaves no doubt that oil and justice don’t mix.