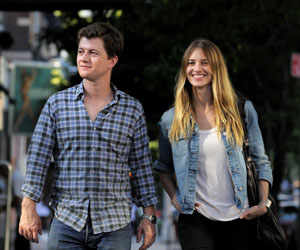 Sara Ziff began her career as a top runway model when she was just 14 years old. For a decade, she worked for designers like Ralph Lauren and Marc Jacobs. Now, Ziff and her partner Ole Schell made a documentary on what modeling is really like backstage. The two of them spoke with assistant editor Jen Phillips about how models are exploited, what it’s like to be on a billboard in Times Square, and about being detained by armed guards for trying to film at a Hollywood party.

To listen to a podcast of this interview, click here.

Mother Jones: So we’re here today talking about your documentary, Picture Me. Sara and Ole, thanks for joining us.

Sara Ziff, Ole Schell: Thanks for having us.

MJ: So Sara, you were scouted when you were about 12 is that right?

SZ: I was actually scouted when I was 14, still very young, in New York, where I grew up, on the street by a photographer.

OS: Sorry, maybe Sara, one of us or you can talk about what the process is like for a 14 or 15-year-old to get scouted by a mother agent, and brought over, and like put in a model apartment, and be completely like a fish out of water, I think maybe that would be interesting for the listeners.

MJ: I was wondering about that because it seems like there’s no training, no one tells you like, this is okay, this is not okay, that’s part of… I don’t know if that’s part of what leads to the high rates of girls being sexually assaulted or put in very compromising situations.

SZ: Well, yeah, imagine you’ve got a 14, 15-year old girl coming here from Brazil. She’s un-chaperoned, there are no rules about you have to have a guardian with you on shoots or at shows. She’s living in a model apartment, she doesn’t know how to manage her money, doesn’t know if she’s getting ripped off by her agency.

OS: Doesn’t know anybody… no friends.

SZ: And there’s a hierarchy when you pair a 45-year-old male photographer—and many of the photographers are older, heterosexual men—with a 15-year old girl. And I think in a way you’re asking for trouble if that girl is totally unsupervised, living miles away from friends and family. It’s kind of a no-brainer. There should be some protection for these girls.

OS: To expand on what Sara said a little bit, these girls are very young and they’re told to go on a casting and told to really impress a photographer on a casting. Like Sena [Cech], in our movie, her testimonial—we gave the models cameras and they could speak directly into the camera—she talked about going on a casting to a photographer who sort of specialized in sexual imagery, and her agency tells her to really impress this photographer because he could really make you. And she got in there and even on the casting asked her to take his clothes off and then he started taking his clothes off, and the photographer’s assistant started taking photographs of them and then he asked her to touch him in a sexual manner and also have it photographed.

SZ: And it’s also worth noting that some of these photographers, like the photographer we’re talking about, they shoot pretty sleazy stuff but they also shoot covers of Vogue. These are not like sleazy people who no one’s ever heard of.

MJ: So you guys had a really interesting chapter in movie about money. And I was amazed by two things: Number one, some models don’t make money. And number two: you know, there are pictures of Sara holding this check for like $100,000. Ole, I know a lot of guys would say it’s their dream to date a model, but how do you deal with it when your girlfriend is earning that kind of bank at 20 years old?

OS: It just kind of makes your head spin, I didn’t quite know how to process it, you know, it’s kind of a otherworldly experience to have the person you care for, your girlfriend, not only on big billboards with everybody looking at her, but also to be cashing these big checks. And other strange and otherworldly things would happen. I went into H&M to buy some shorts one time and there was a giant poster of Sara, literally like 50 feet, of her like making out with another male model in the sunset. So people would say don’t go to Times Square, man, there’s even a bigger one up there. And every bag from H&M in the country, and perhaps the world, had a picture of Sara making out with this other guy. So this is another sort of strange experience you have to endure.

SZ: It’s funny because I think a lot of young women have probably looked at my picture in ads and pictures from the runway and assumed that this was some sort of ideal to aspire to cause I was chosen to walk down that runway or be in that ad. But a lot of the time I would see my pictures and certainly not feel confident in myself or in my appearance.

MJ: Ole, Sara would sneak you backstage, is that right?

MJ: And so about how many times would you say, on average, would you say did you get thrown out, or had your camera taken away or otherwise discouraged.

OS: Yeah, I was thrown out a bunch of times. I was thrown off many sets and shows so I wear that as a badge of honor I suppose. There a funny occasion when we were in Los Angeles and Sara was in a private Gucci show for this famous restaurateur, Mr. Chow, and he had all these A-list celebrities there. And put on this private but very glamorous show, and I was there minding my own business, just trying to film Sara getting ready and filming some B-roll, when all of a sudden these former Marines who were armed to the hilt came out with their guns and dragged me downstairs to a holding area and confiscated my camera and took our tapes. And held me there for a good long time, so you know, people take this kind of stuff seriously.

MJ: What is the normal life span for a model?

SZ: It really depends, it depends at what level of the business you’re working. Generally the higher up you go in terms of the level of the work that you’re doing, the sort of artistic integrity of the work you’re doing, your shelf life is actually much shorter. Some of the models I remember when I was doing the shows would last a season, maybe two seasons, which is, you know, maybe a year, and then you never really see them again.

MJ: So at the end of their time, are a lot of them just left with their… they don’t have an education, they may or may not have money, I mean, what happens to these girls?

SZ: That’s a good question; I think it really depends on the girl. I can speak for myself; I always intended to go to college. I fell into this slightly weird world and now I’m at Columbia. Other friends of mine have gone back to school. A lot of the girls who dropped out of school at a really young age are not in such a fortunate position. I think that certainly the fact that the industry is unregulated means some of these agencies I think really get away with a lot. When you’re dealing with young, naïve kids, who, you know, the only money they’ve earned is from the tooth fairy. Then they’re just happy to get any work and make any money, and they certainly don’t know how to manage their money, they don’t know if they’re getting ripped off, and there’s really no measure of protection for these people. And I think that there’s a real need for some kind of regulation in the business and I think maybe a union would be a good way to bring that protection. And there are two models in London who have actually recently formed a union.

OS: I was gonna say that the industry is not all sordid, people focus on these negative stories, especially in our film people have focused on negative stories, people have focused on these aspects of the film, but as Sara will often say, the vast majority of people are professional, and we did have a lot of positive experiences in it, especially Sara in the industry so maybe Sara can offer a little balance…

SZ: No, no, I certainly, we’ve focused on the negative in this interview, but in a way I feel grateful, very grateful, for my experiences in the business and I think that fashion is all about image and in a way being framed by other people has given me a little bit of a lesson in how to do the framing myself. Fashion’s a universal language, I don’t think it’s unimportant, I just think that we need to look at the industry’s practices and see how we can make it better.