Working closely with Mental Disability Rights International, noted photojournalist Eugene Richards spent years documenting conditions in pyschiatric hospitals around the world. This photo essay is an excerpt of his book, A Procession of Them (University of Texas Press, 2008)

Hidalgo, Mexico, 1999. Though the sun is beginning to filter in through the barred windows, it’s damp and cold in the men’s ward at Fernando Ocaranza Psychiatric Hospital—no more than 50 degrees. Around the edges of the common room are tangled nests of men lying together in heaps, trying to stay warm. Others shuffle busily back and forth, as if they have a destination in mind. In the middle of the floor, running half the length of the ward, is a pool of urine. 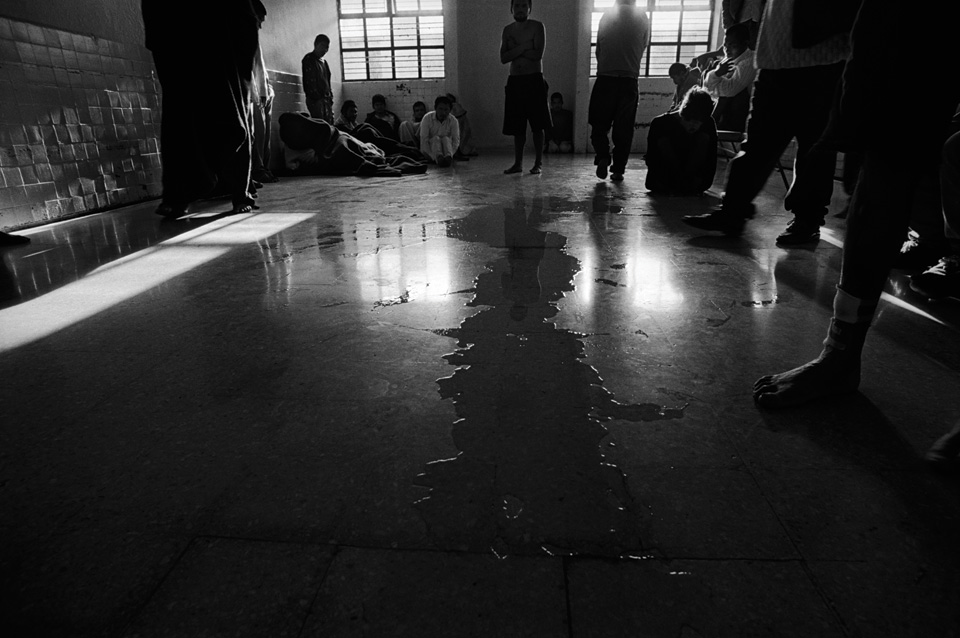 MEXICO. Pachuca, Hidalgo. 1999. Early morning in the men’s ward of the Ocaranza psychiatric hospital, where pools of urine and feces collect on the floor. One hundred and ten men are held in a ward which has only one attendant. The majority of patients at Ocaranza are mentally disabled, not mentally ill. Sixty percent suffer from conditions that do not require institutionalization. The hospital was shut down in 2001 in part because of the publicity generated by Mental Disability Rights International’s supporters.

Attendants prod a group of 15 or 20 naked men down a hallway into a shower room. The patients moan and shiver as a worker bathes them. Then they are herded back along the drafty hall, still dripping wet, and forced to compete with one another for items of clothing: shirts that cover only their shoulders, pants so large they have to be held up. A few pull on dresses, since women’s clothing has been mixed in with the men’s during washing.

At the other end of the hospital, in the female ward, frail, heavily medicated women shudder beneath fluorescent fixtures. An elderly lady who I think might have Alzheimer’s is tied to a wheelchair, her arms wrapped around herself. When I ask who she is, the attendant answers that she doesn’t know “the old one’s” name, only that she’s been here a very long time. 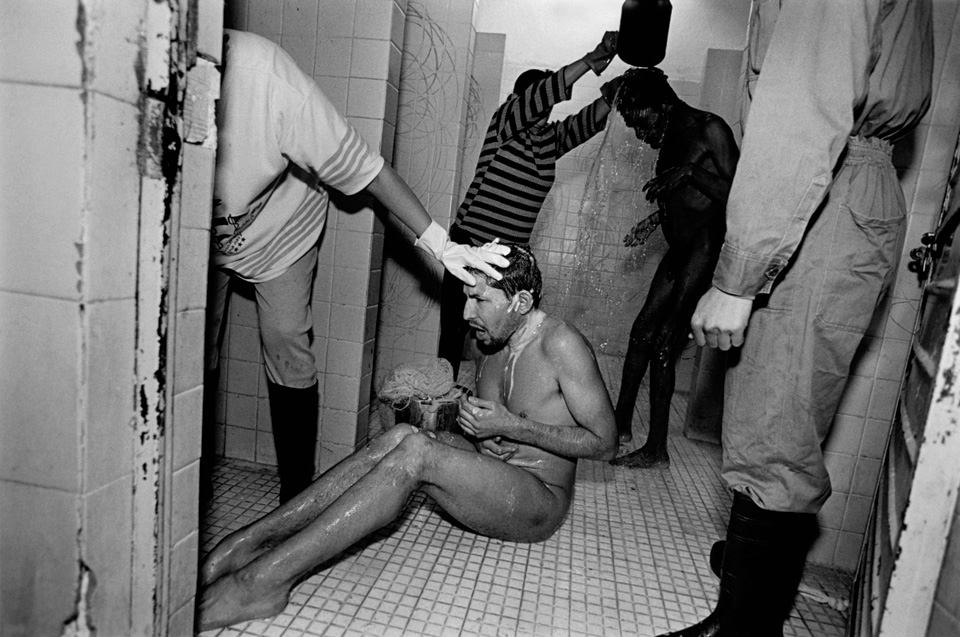 MEXICO. Pachuca, Hidalgo. 1999. At the Ocaranza Psychiatric Hospital, a patient is being bathed against his will. Female attendants pour buckets of ice cold water on the male patients. There are no towels, the air temperature is 48 degrees Fahrenheit. 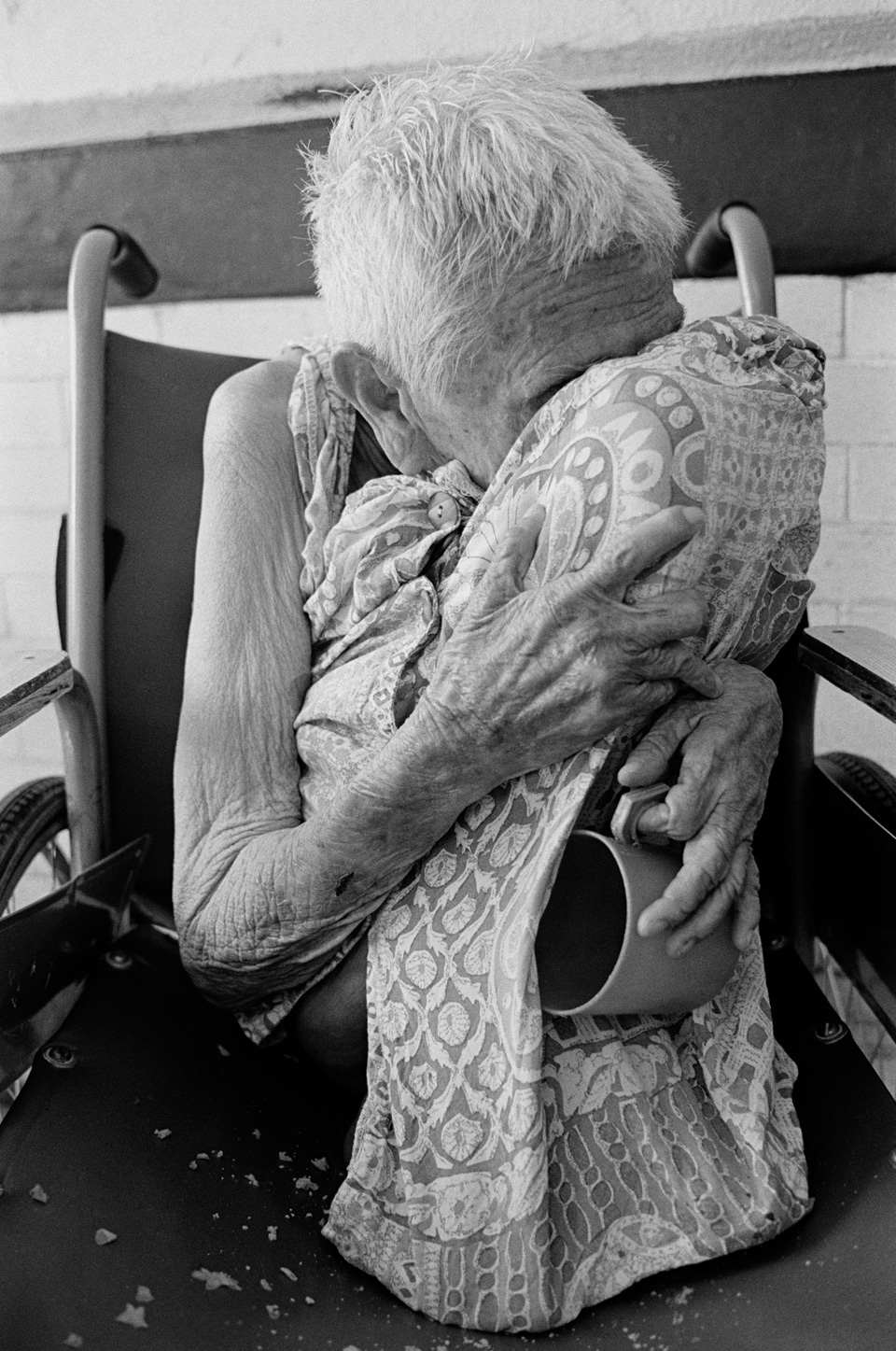 MEXICO. Pachuca, Hidalgo. 1999. Believed to be 70 or 80 years old, this woman is one of many elderly Ocaranza patients exhibiting symptoms of Alzheimer’s disease. Many of the people in Mexican institutions are labeled “abandonados” because they no longer have family or a place to go. Mentally ill or not, they remain here for life. 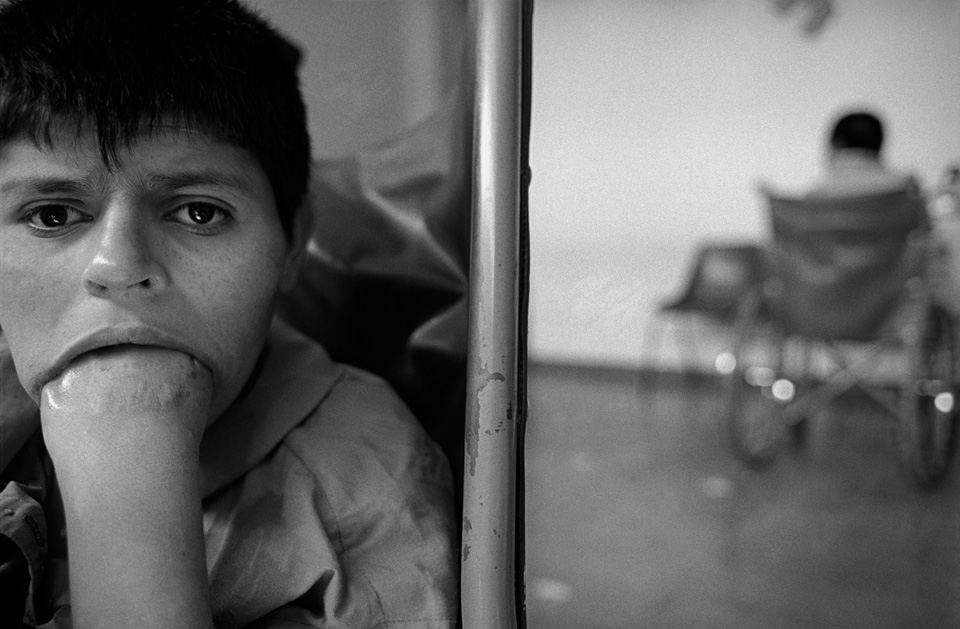 MEXICO. Pachuca, Hidalgo. 1999. At the Ocaranza psychiatric hospital, a 17 year old, who had been abandoned as an infant outside a church, swallows her whole hand. Released from a blanket restraint, the girl’s only acknowledged therapy is to place her hands under a heat lamp for fifteen minutes.

This was the first of many trips. Over the last decade, I’ve crossed the globe as a volunteer photographer for Mental Disability Rights International, an advocacy group dedicated to improving conditions in psychiatric hospitals worldwide. The kinds of cruelty I witnessed in Hidalgo, I’ve since seen in Kosovo, Hungary, Argentina, Armenia, and Paraguay. Overcrowded, cash-strapped mental health facilities in the United States are bad enough, but the conditions in the Third World are truly nightmarish. Patients are bathed in ice water; some are kept in rooms with no lights, while others are wrapped in straitjackets 20 hours a day. Rapes go unpunished. As of 2005, 25 percent of countries—including China, Thailand, El Salvador, Turkey, and Vietnam—had no laws protecting psychiatric patients, while as of 2002, laws in 15 percent of countries hadn’t changed for at least 40 years. It’s as if there’s a kind of worldwide agreement that once people are classified as mentally disabled or mentally ill, you can do things to them that you’d otherwise never do.

Before arriving at the Neuro-Psychiatric Hospital in Asunción, Paraguay, in 2003, I had heard rumors of an autistic teenage boy named Jorge locked in a tiny cell somewhere inside the facility. I follow one of the workers along a dark corridor to a six-by-nine-foot isolation area with a hole in the floor for a toilet, a piece of foam for a bed, and bars through which food is passed. Jorge, naked, crouches in the front part of the enclosure. When we move closer, he reaches for our hands, throats, and faces, laughing and making loud, guttural noises. Said to have been abandoned by his family, Jorge has been held for four years in this dank cell. 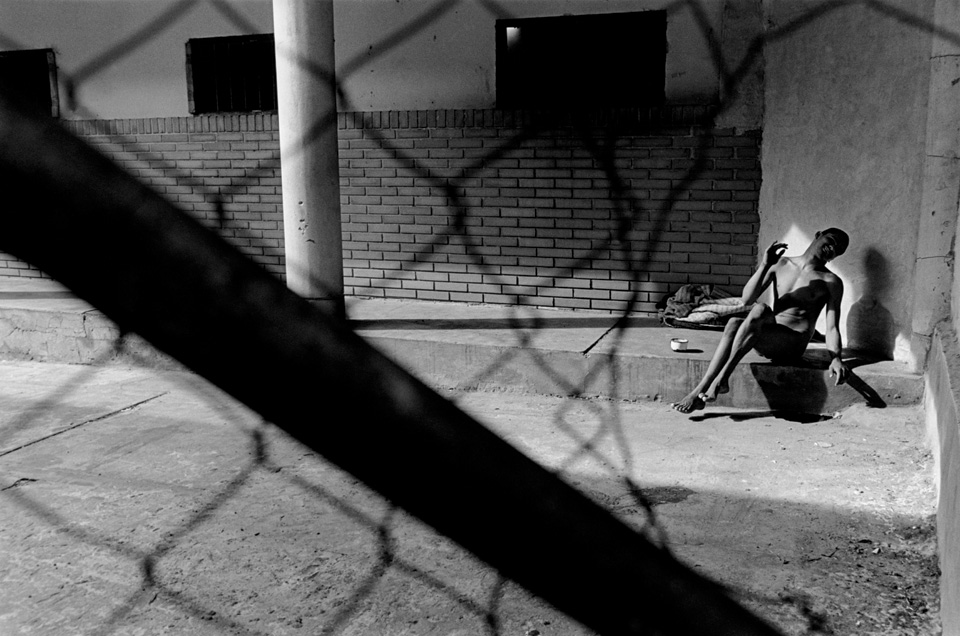 PARAGUAY. Asuncion. 2003. Kept most of every day in a six-by-nine foot cell at the Neuro-Psychiatric Hospital, seventeen-year-old Jorge, who has autism, is allotted a few hours in a bare, but sunny space.

For two hours every other day, Jorge is let out, barefoot, into an outside enclosure where the ground is covered with broken glass. The attendants don’t speak to him; instead, they look the other way. I see a similar situation at a private group home a mile from the hospital, where a 13-year-old boy lives in a cage barely big enough for a dog. An epileptic since birth, he’s on so many sedatives that he drools constantly. Socks on his hands prevent him from sucking on fingers that were burned in a fire. 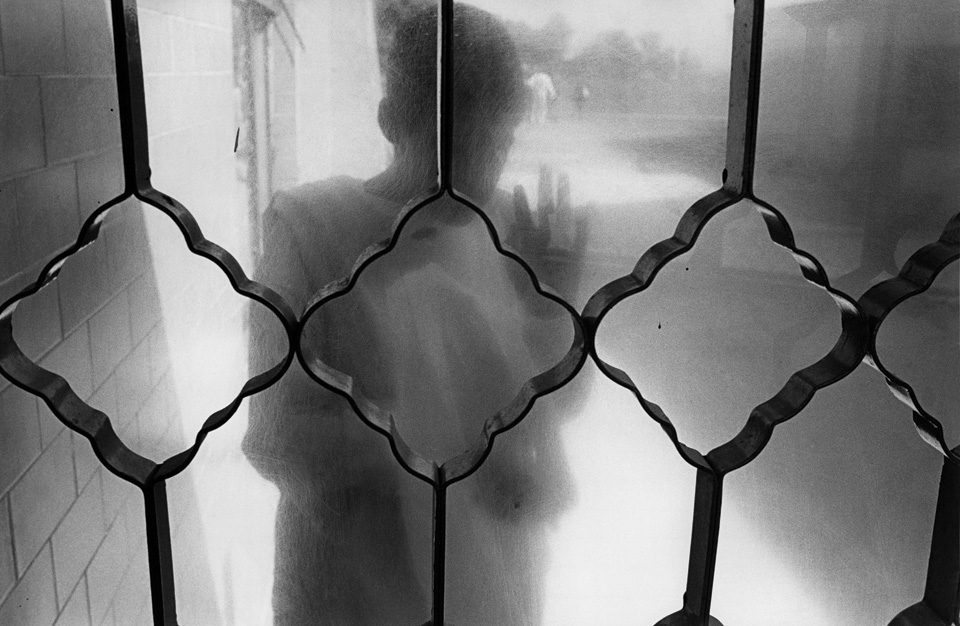 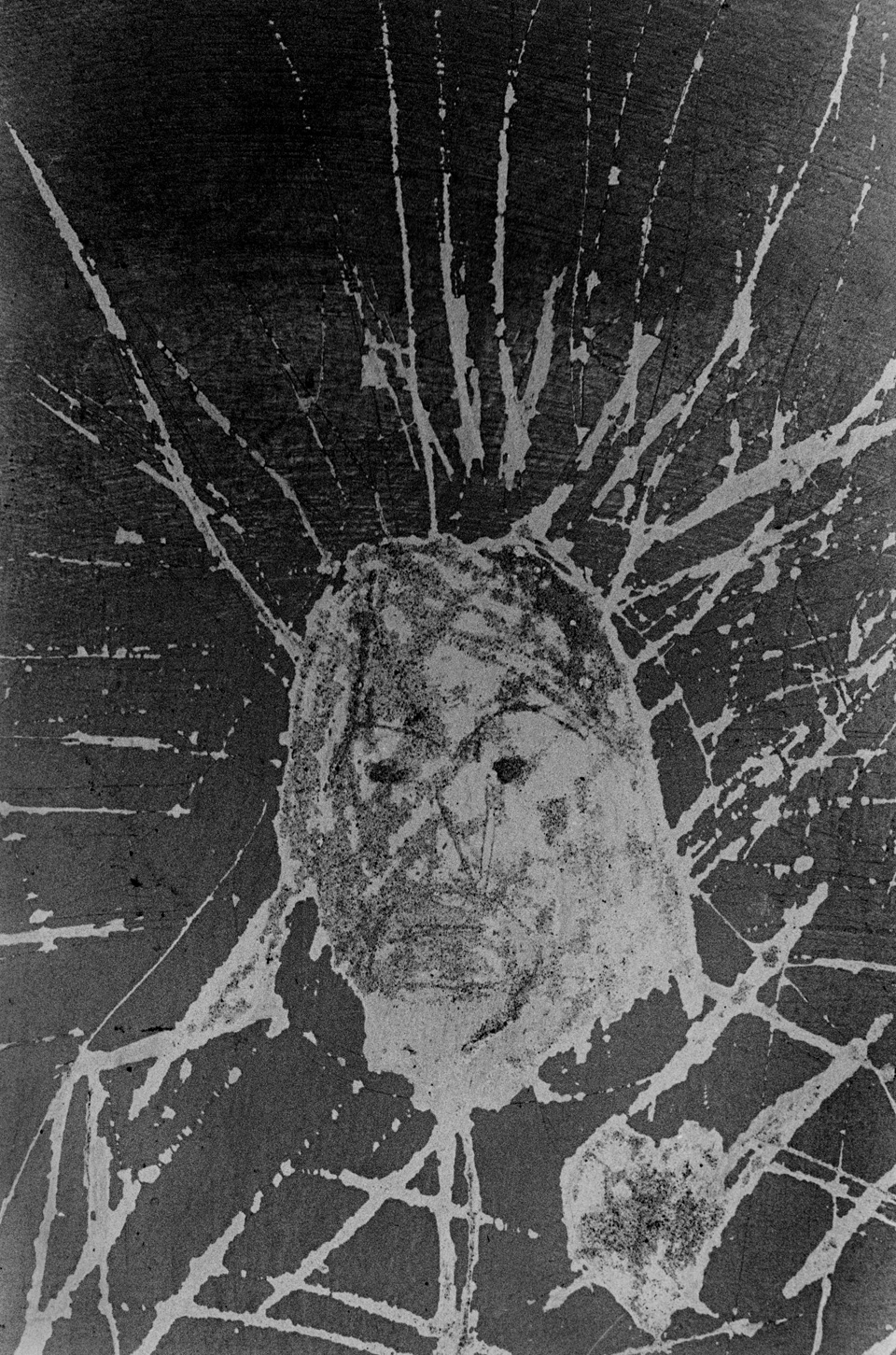 PARAGUAY. Asuncion. 2005. Portrait resembling Jesus was scratched onto a wall at the Neuro-Psychiatric Hospital by a mute patient whom others fear. 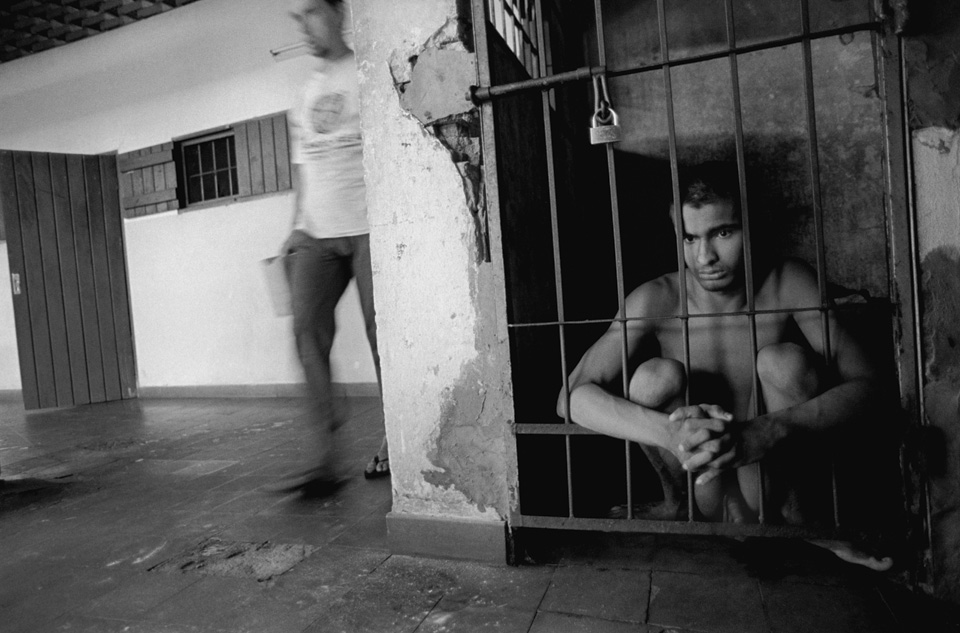 PARAGUAY. Asuncion. 2003. Neuro-Psychiatric Hospital. Seventeen-year-old Jorge, who has autism, has been held for four years in a tiny cell that has a hole in the floor for a toilet and no electricity.

In so many photographs of the disenfranchised, subjects are shot to look wise and dignified, as if there is something ennobling about suffering. We like these images for their optimism—all that serenity makes the squalor more palatable. But all too often, when people are locked up, they lose their dignity. Psychiatric patients rarely look transcendent—mostly, they seem frightened, vacant, miserable. But shooting honest, brutal images presents another problem: That can be too much to bear. We peer in at the patients behind the iron bars and wonder if it might actually be safer with them in there. Once you meet the patients, they’re not so easy to push out of your mind. If you go into the children’s ward, you’ll hear kids screaming, banging their heads against the wall. Those could be your children. That’s the part I can’t show you. 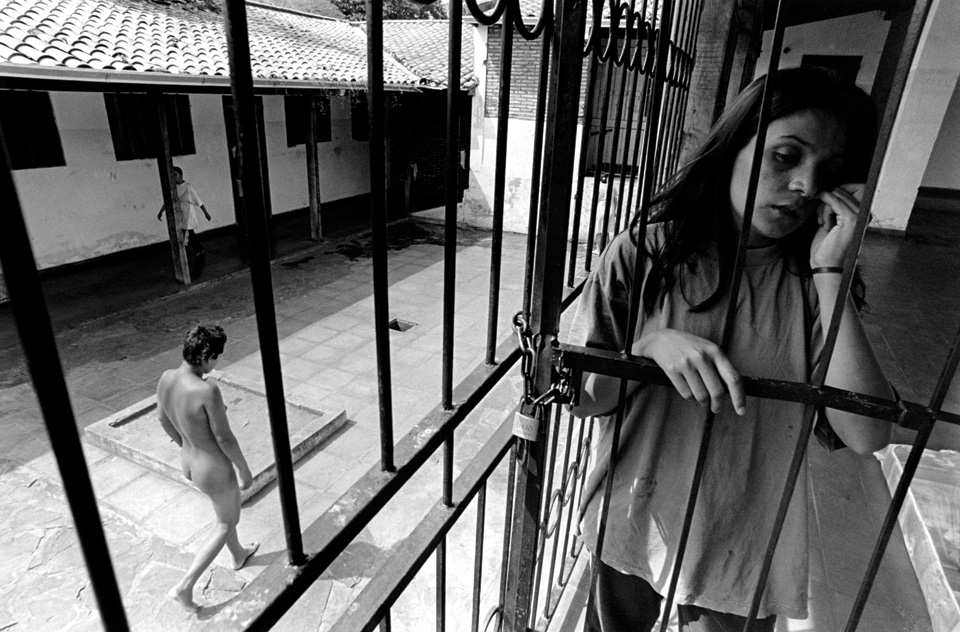 PARAGUAY. Asuncion. 2003. There are forty female patients confined in the acute pavilion at the Neuro-Psychiatric Hospital. 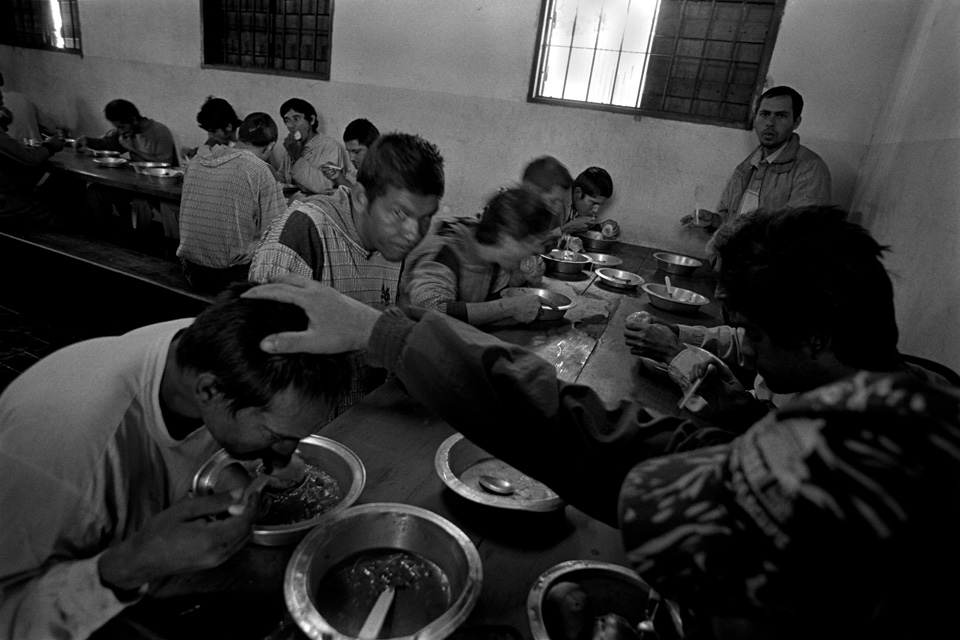 PARAGUAY. Asuncion. 2004. Mealtimes at the Neuro-Psychiatric Hospital are crowded, noisy. 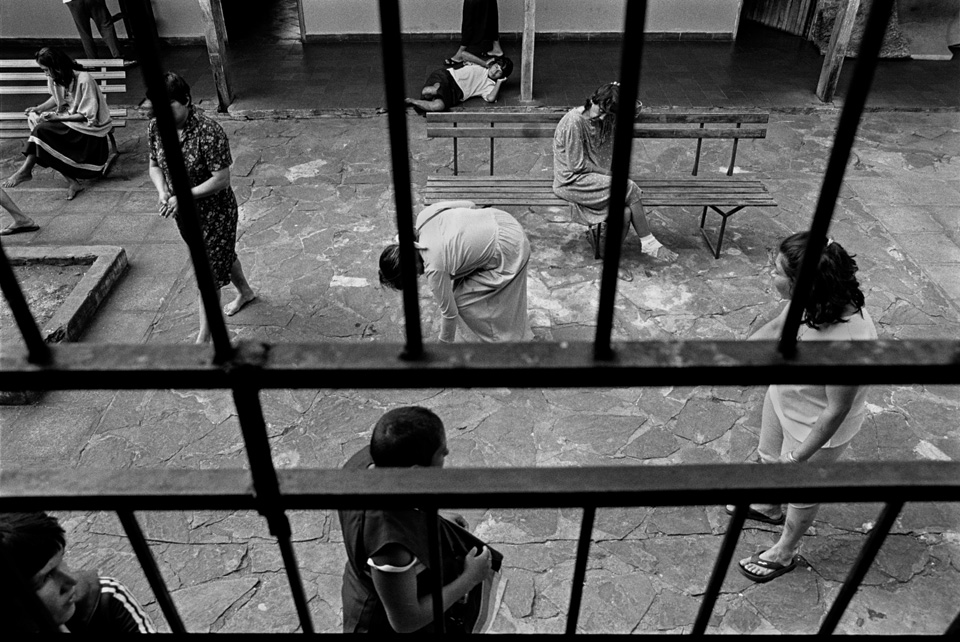 PARAGUAY. Asuncion. 2005. Among the patients in the acute ward of the Neuro-Psychiatric Hospital is a woman who murdered her husband, and another who plucked out a patient’s eye. 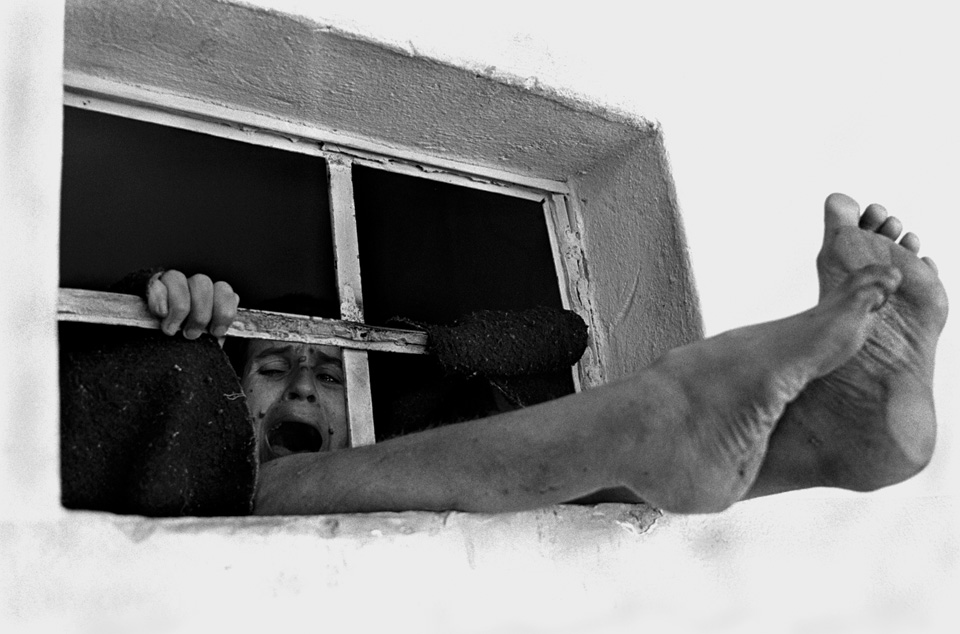 PARAGUAY. Asuncion. 2004. Screaming and pulling at the bars, this woman has repeatedly attempted to escape from the Neuro-Psychiatric Hospital. 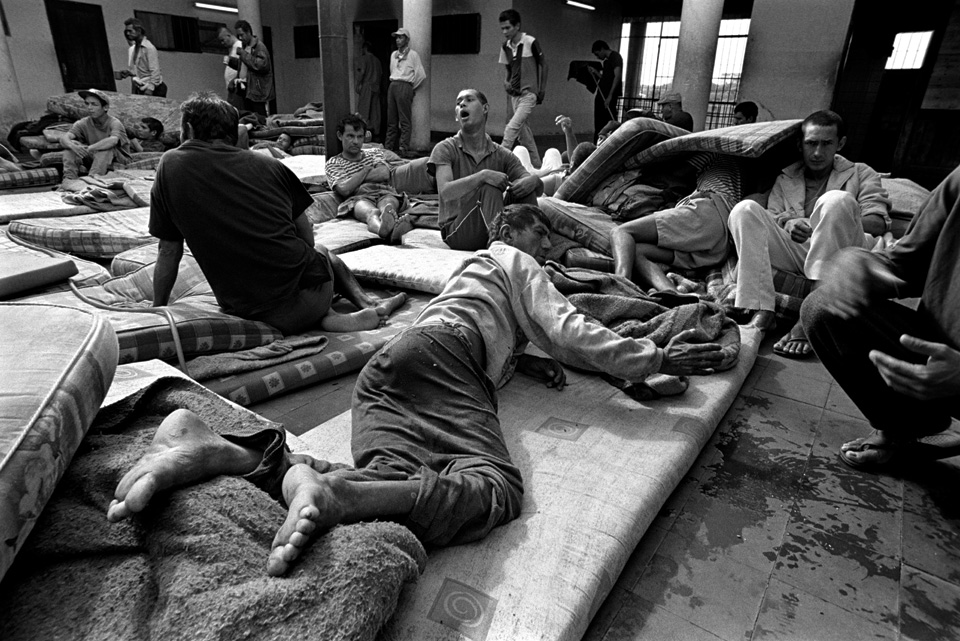 PARAGUAY. Asuncion. 2004. Neuro-Psychiatric Hospital. The forty-six residents of Sala 2 pull their mattresses into the courtyard, so that their sleeping rooms can be hosed down. 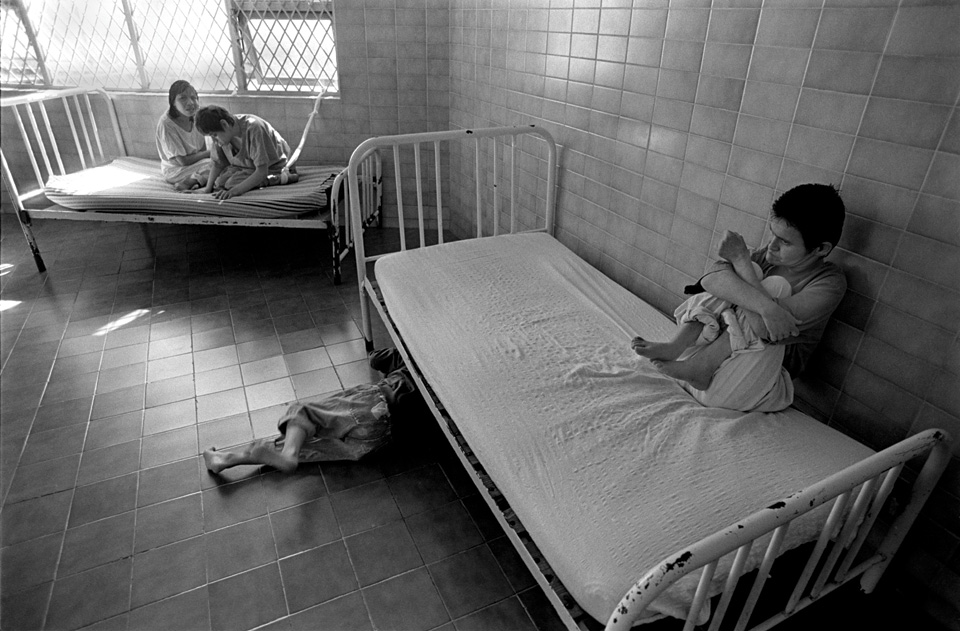 MEXICO. Guadalajara. 1999. In the children’s ward of the Jalisco facility, children are housed with adults, tethered to the bars of their cells, and covered with flies. 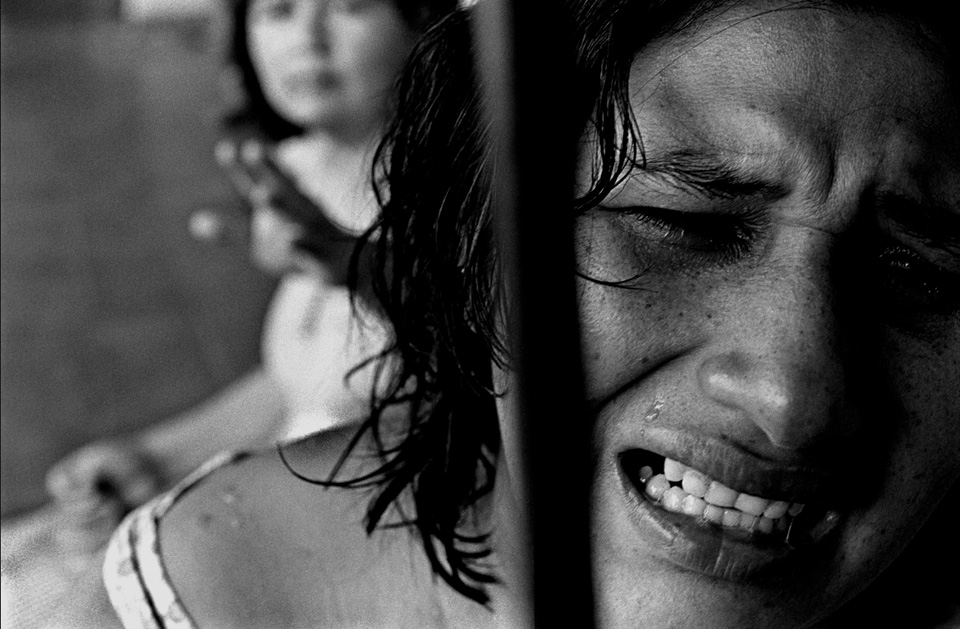 PARAGUAY. Asuncion. 2004. There are patients who lock themselves up in order to be alone in the acute pavilion of the Neuro-Psychiatric Hospital.

(Richards photographed this project with the generous help of Mental Disability Rights International.)