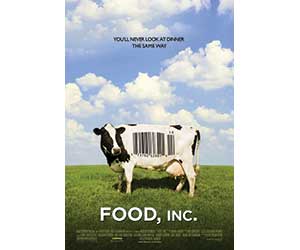 Food, Inc. is the latest in a line of cinematic polemics that includes Super Size Me, King Corn, and The Future of Food. Yet this urgent, graphic film exposes more atrocious things about the food we eat than all of its predecessors combined. Within five minutes of the opening credits, the screen fills with shots of assembly-line workers staple tagging the heads of chicks, close-ups of hens’ legs buckling under the weight of their own breasts, and dying chickens packed into polluted sheds. Then come the acres of cattle ankle deep in manure, sick cows being tortured before slaughter, and engineers proudly displaying pink slabs of ammonia-washed “hamburger meat filler.” Director Robert Kenner isn’t just concerned with the suffering of animals. He also profiles Americans caught in the snare of the food industry, like Barbara Kowalcyk, whose two-and-a-half-year-old son died after eating an E. coli-infected hamburger. She’s spent six years lobbying Congress to empower the usda to shut down meat plants that repeatedly fail microbial testing. (Who knew it couldn’t?)

For the converted, the film’s litany of horrors may feel familiar, and there is an overreliance on voice-overs by Michael Pollan (interviewed here) and Eric Schlosser. Yet Food, Inc. still engenders disbelief: How does Big Food get away with this? Partly because we, the consumers, often reward it with our purchasing power. An incitement to change comes, strangely enough, from a vice president of the American Corn Growers Association, who explains, “People have got to start demanding good, wholesome food from us, and we’ll deliver.”