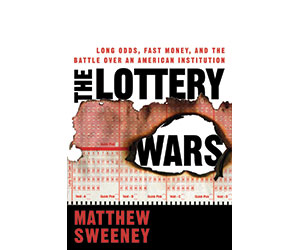 Americans buy more than $57 billion worth of lottery tickets a year. That works out to $500 a household—more than is spent on movies, music, and books combined. While it’s no secret that lotteries have a dark side, the fact that so much scandal is consolidated into fewer and fewer companies is less well known. In The Lottery Wars, Matthew Sweeney compellingly maps the seedy history of this American pastime.

Lotteries were used to outfit George Washington’s army, and they paved the way for modern insurance. (Ticket buyers began placing side bets to protect against losses.) But even in the early days, hucksters figured out how to rig the games. In the 1830s, P.T. Barnum made a bundle on lotteries by handing out worthless items, like pieces of tape, as prizes. Corruption still abounds: Illinois governor Rod Blagojevich tried to bring keno to the state, only to shelve the plan when it came out that a former aide was a keno lobbyist. And gtech, the $4.7 billion company that runs 70 percent of the world’s online lottery games, is famously sleazy. Writes Sweeney, “There may be no other company with so many government contacts that has such an extensive rap sheet of indictments, convictions, and accusations of fraud and abuse.”

Despite its shadiness, the lottery continues to thrive; slogans such as Oregon’s “There’s no such thing as a losing ticket” encourage us to keep trying our luck. As Alexander Hamilton wrote approvingly in 1793, “Everybody, almost, can and will be willing to hazard a trifling sum for the chance of considerable gain.”