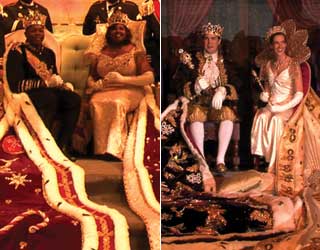 Mobile, Alabama, held America’s first Mardi Gras in 1703, 15 years before New Orleans was even a city. It also received the nation’s last shipment of slaves, and was the site of one of the last reported lynchings, in 1981. In 2007, Alabama officially apologized for slavery and its “after effects.” But those after effects still play out in Mobile’s annual Mardi Gras, a traditionally segregated event where all-black and all-white clubs throw separate balls and parades to honor their respective carnival kings and queens.

The fascinating The Order of Myths, which pbs‘s Independent Lens will air on February 24, follows these parallel worlds during 2007’s Mardi Gras. The polite partygoers interviewed by director Margaret Brown aren’t eager to confront the obvious: Whites talk of the importance of preserving “roots,” while blacks speak broadly of the need for “a change of heart” and “moving forward.” But Brown digs deeper, exposing a historical connection between the white and black queens that embodies Mobile’s inescapable racial divide.

When, for the first time ever, the black royal couple attends its white counterpart’s coronation, revelers display heartbreaking happiness over this bit of progress. But that baby step is plenty for some. “There’s a time and there’s a place for change,” the white king says. “But I don’t think anything needs to be forced on it right now. It’s worked well for years.”