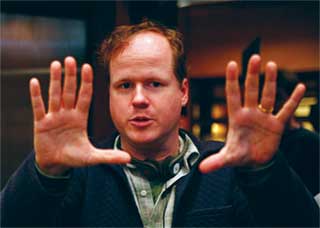 For more of this interview, listen to Sheerly Avni’s extended conversation with Joss Whedon, or download the podcast from iTunes.

Since creating the cult TV series Buffy the Vampire Slayer in 1997, director, writer, and Toy Story scribe Joss Whedon has emerged as a shining star in the geek firmament. He’s also become one of pop culture’s most surprising feminists. Though they inhabit the male-centric world of sci-fi, his female protagonists, from Buffy to the women of the short-lived space-cowboy series Firefly, are funny, smart, and able to punch, kick, and banter their way out of trouble. When he came up with the idea for Dollhouse, a new series in which the heroine is rented out to fantasy-seeking clients and has her mind erased after each assignment, he asked for a thumbs-up from the women’s advocacy group Equality Now after pitching the networks. The widely anticipated new show, featuring Buffy‘s Eliza Dushku, is set to premier on Fox in January. Mother Jones met with the 44-year-old Whedon in his small office on the Fox lot, where he discussed the importance of obsession in art and the ironies of preaching feminism on Rupert Murdoch’s flagship channel. To listen to an extended interview with Whedon, click here.

Joss Whedon: I respect television in a way that some people who came out of film might not. Some people might take this as stereotyping, but I describe television as feminine and movies as masculine, in the sense that television wants to examine a problem from all sides and talk about it for a long time, and movies just want to hit the climax and then maybe have a smoke. I respect the rules of TV, the rules of keeping things commercial and interesting and pop-y and fun.

MJ: Some examples of those rules?

JW: My cast was not hideous to look upon. I made every act break at an exciting time that would make you want to come back after you examined these products that we used to examine before TiVo. And I tried to make money for the people that I work with, like Hyman Roth.

MJ: Tell us a little bit about your concept of “womb envy.”

JW: Everybody makes fun of Uncle Joss when he brings up womb envy! But I still believe in it. It’s a very simple theory and I gave it a silly name, but basically it just seemed to be a fundamental thing that women have something men don’t, the obvious being an ability to bear children, and the resilience to hang in as parents. I don’t understand why or how anyone ever pulled off the whole idea of “women are inferior.” Men not only don’t get what’s important about what women are capable of, but in fact they fear it, and envy it, and want to throw stones at it, because it’s the thing they can’t have.

MJ: When you wrote Buffy, were you actively thinking, “I’m going to make an empowered feminist icon,” or were you just intuitively telling the story you wanted to tell? Or are they the same?

JW: It’s both, and they’re not the same. Because “intuitively” means, “This is what turns me on, this is what I need to see, this is my obsession.” I’ve seen a lot of movies [written] by guys who set out to [create a feminist icon] and didn’t feel it. Look at A League of Their Own. All of the good lines are Tom Hanks’. Those guys are really fabulous writers, but it’s not enough to say, “This should be done.” You have to need to do it. The way Guillermo del Toro [Pan’s Labyrinth] needs to make movies about insects—that man cares more about insects than anyone I know. He clearly is obsessed. And obsession is beautiful. It’s what makes art.

MJ: As a father, what do you think about the fact that Pixar doesn’t have a [top-billed] female protagonist yet?

JW: I wrote Toy Story [for Pixar]. And I remember at the time having a crisis in myself because I couldn’t figure out Bo Peep. There’s no reason why there couldn’t be [female Pixar leads]. There is that moment in The Incredibles, when the mom has a pep talk with Violet and Violet stands up like a hero and you can see her other eye for the first time. [My wife] said, “Oh look, they wrote a scene for you.”

MJ: What kind of fallout have you gotten for Buffy having an affair with a woman in the Buffy comic?

JW: I have gotten no fallout of any kind. The fact of the matter is that [women kissing] is kind of old news. It’s even old news in pop culture. We tried not to turn it into a giant event and spend months going “Wait for the Buffy kiss—so she can figure out how heterosexual she is!”

MJ: You create interesting heroes, as well as interesting villains. In Angel, you have the good guy fighting against an evil law firm, Wolfram and Hart. In Firefly, you have Captain Malcolm Reynolds, a defeated rebel soldier, battling the victorious planetary Alliance.

JW: Evil doesn’t come in saying, [breathes heavily, Darth Vader-style], “It’s your faaather.” Generally speaking, it’s a lot more nebulous. In fact, it usually isn’t evil so much as it is a lot of people overthinking things until they find themselves caught in an untenable situation.

MJ: In the second-to-last season of Angel, the hero actually takes a job with Wolfram and Hart, and eventually he just loses it and brings down the house.

JW: Well, you know, I’m sure I’m going to bring down News Corp with Dollhouse. Hmmm—maybe you shouldn’t quote that. I’m not a huge fan of Mr. Murdoch’s politics, God knows, or his methods. But I’ve been at Fox on and off for practically the whole of my career. Am I the biggest hypocrite in the world for taking their money? Am I doing any good? Or am I working for Wolfram and Hart? I feel at the end of the day, I’m doing some good. They’re letting me tell my stories. We’ll see if the stories on Dollhouse actually come out the way I plan them to.