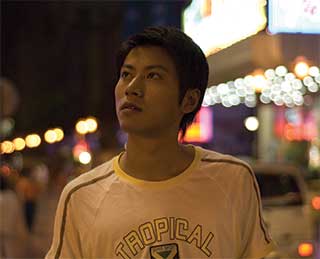 
In 2002, Canadian filmmaker Yung Chang hopped on a luxury cruise ship full of American tourists for a “farewell tour” of the Yangtze River. Chang’s immigrant grandfather had told him stories about the river, and he hoped to see it before it was changed forever by the Three Gorges Dam. But as he watched the old country slip beneath the waters, Chang also found an intriguing story of the new China below deck.

While his Western shipmates amuse themselves with songs like “It’s so easy to learn Chinesey,” Chang gets to know two of the boat’s many young employees. Chen Bo Yu (above), a handsome 19-year-old porter, is one of China’s millions of only-child “little emperors” and a rabid convert to capitalism. The ship’s manager gives Chen and the rest of the staff regular lessons on how to accommodate guests (don’t call them “old, pale, or fat”). But after finding out that elderly passengers are stingy tippers, Chen refuses to serve them. “What the fuck am I going to do with two yuan?” he asks. Representing the flip side of progress is Yu Shui, a homesick 16-year-old dishwasher who can hardly bring herself to unclog the sink without crying. She has to work to support her illiterate peasant parents and two younger siblings, who are being relocated, yet again, because of the rising Yangtze reservoir.

Up the Yangtze, which airs on pbs‘s POV on October 8, is interspersed with cinematographer Wang Shi Qing’s lush vistas of the river and eerie shots of “ghost towns,” like the one Yu has left behind, waiting to be submerged. Though the film ends on a dispirited note, Chang’s journey has a happier-than-expected ending: He’s set up a fund that’s raised $20,000 for Yu and her family. Since the film, she’s jumped ship and gone back to school.