Tompkins Square Park (powerHouse Books, 2008) is about the resistance and struggle of people in the Lower East Side, literally to exist as the community faced drastic gentrification in the late 1980s and mid-1990s. This work focuses on Tompkins Square Park as the symbol and stronghold of the antigentrification movement, the scene of one of the most important political and avant-garde movements in New York history. -Q. Sakamaki 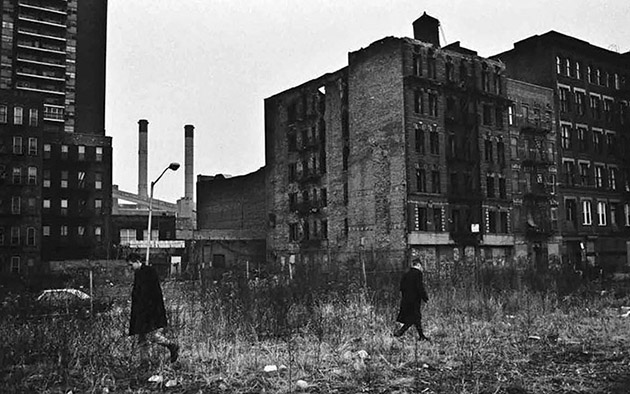 December 1987. A scene of Alphabet City before gentrification. 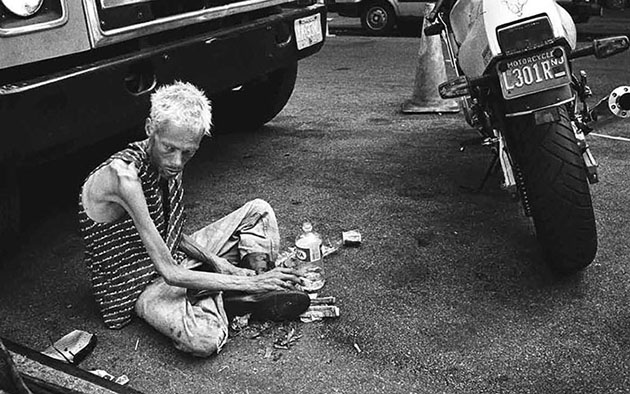 September 1993. During Wigstock, New York’s annual drag festival in Tompkins Square Park, a man who may have HIV/AIDS sits in the street nearby. 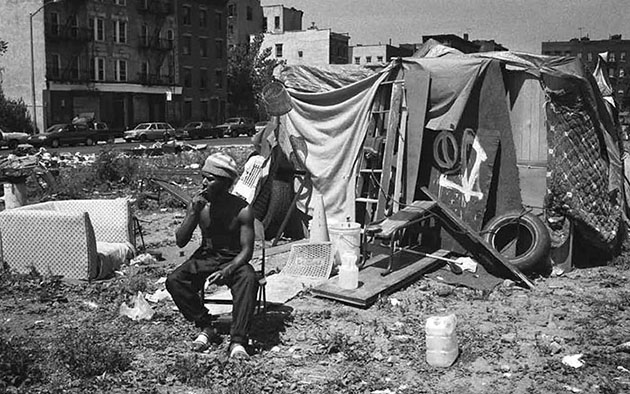 June 1991. A homeless man in front of his encampment. 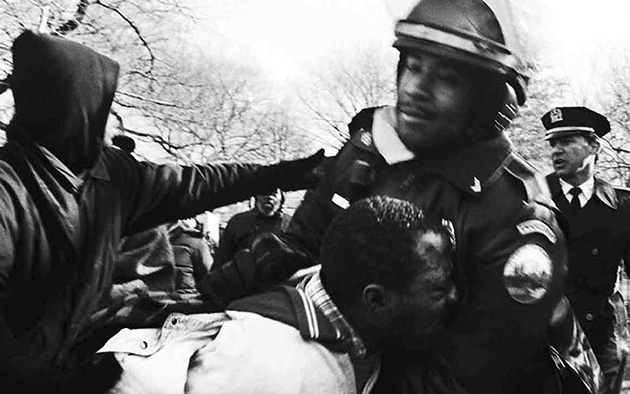 December 14, 1989. During eviction from the park, a homeless man complains and is roughly arrested. 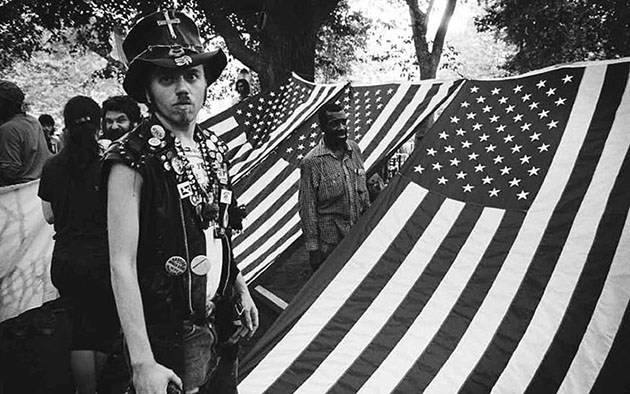 August 1989. Homeless people and their supporters camp out under American flags as a statement on homelessness. The Lower East Side has a long history of liberal, and at times radical, movements that have attracted artists, intellectuals, anarchists, activists, squatters, immigrants, and even political exiles. Many in the community, unlike other more passive communities facing gentrification, stood up and worked together with the homeless to defend housing rights and human rights, as well as their own lifestyles. 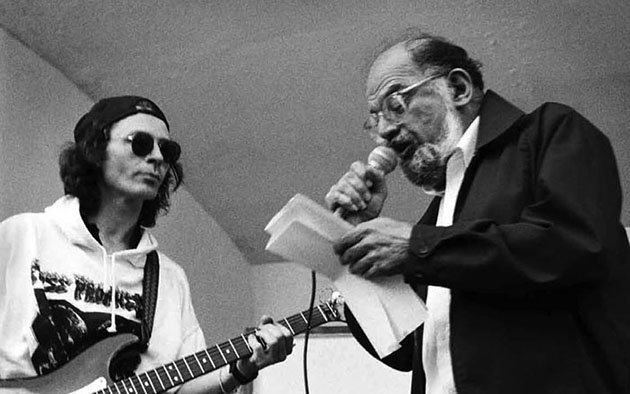 May 1, 1991. Allen Ginsberg recites a poem, demanding affordable housing, at the bandshell during “Resist to Exist.”

July 1989. Homeless people and their supporters protest for affordable housing on Avenue A. Although the community’s anti-gentrification movement had begun before 1988 with a small collection of squatters and anarchists, the August 6 riot triggered what became the larger Tompkins Square Park movement, a grassroots resistance that demanded affordable housing. The park became the symbol of this movement, whose impact extended beyond the neighborhood and into the rest of New York, the rest of the U.S., and even some parts of Europe, notably Berlin. 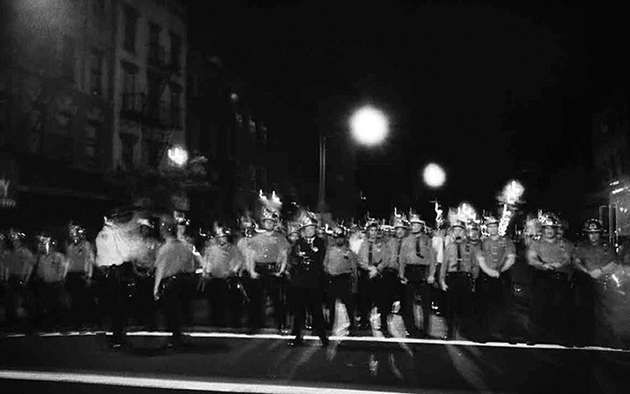 June 3, 1991. The NYPD prepares to confront protesters on Avenue B. The August 6 police riot—so called because the consensus was that the police overreacted to the protestors—and subsequent Tompkins Square riots were the manifestation of a larger concern of the overgentrification of the Lower East Side. 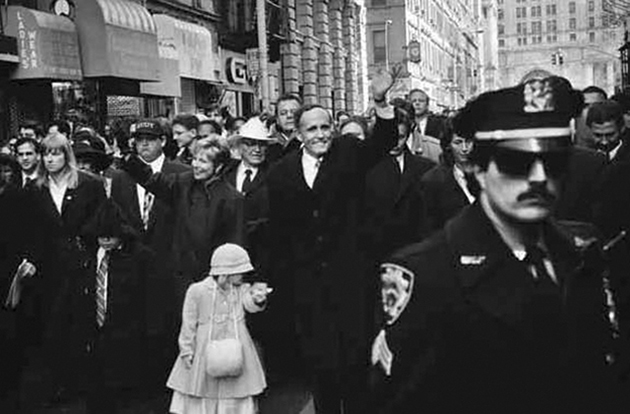 January 1, 1994. The inauguration of Mayor Rudolph Giuliani, another sharp turning point toward gentrification in New York. Although the anti-gentrification-movement still remained for several years, it lost its strong grassroots momentum, especially after Rudy Giuliani took the mayoral office. Twenty years after the August 6 riot, the park now boasts one of the best dog runs in New York City; the Lower East Side has lost much of its diversity and become one of the city’s most expensive, themepark-like entertainment districts. 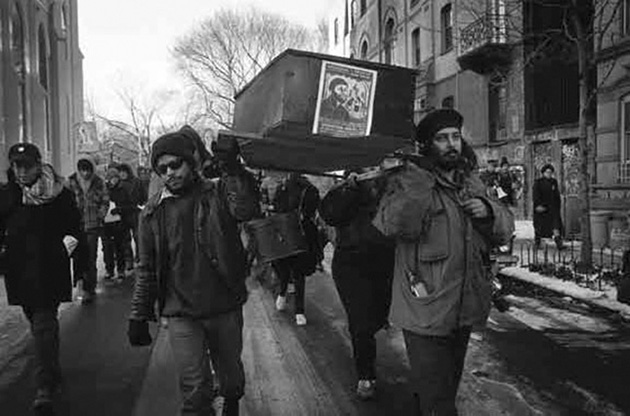 January 4, 1994. A march down Avenue B in memory of Terry Taylor, another homeless Tompkins Square activist who died of AIDS. By 1991, the estimated 300 homeless people living in Tompkins Square Park were gone and the park was forcefully closed for renovations. After its reopening in summer 1992, the Lower East Side quickly started to transform into one of the most high-rent communities in New York. 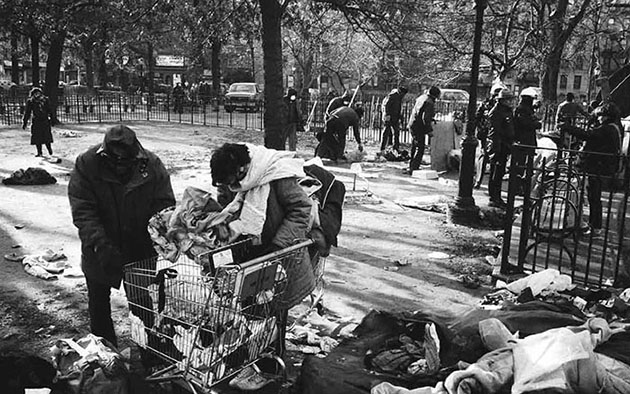 December 14, 1989. In the freezing early morning following eviction from the park, a homeless couple packs their things.