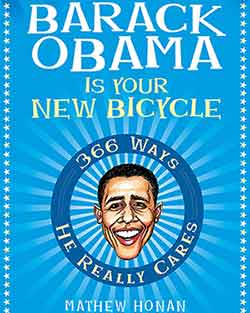 When BarackObamaIsYourNewBicycle.com went up on February 13, 2008, it wasn’t a big deal. The site’s author, San Francisco blogger and journalist Mathew Honan, publicized it only with a short snippet on his Twitter page. The design was Spartan: a white background with large-point, all-caps text describing imaginary, mundane good deeds performed by the Democratic presidential candidate. For example: “Barack Obama left a comment on your blog”; “Barack Obama helped you move a sofa.”

A day after the site launched, the site got play on Technorati.com, trickling upward to Andrew Sullivan, the The Economist, and Time, bringing in thousands of visitors. The site seemed to resonate with people, or at least amuse them. Within 48 hours, imitators had sprung up, among them JohnMcCainIsYourJalopy.com (“John McCain thinks you need a haircut, hippie”) and HillaryClintonIsYourNewBicycle.com. Now that Obamamania is in full swing (what with the tide of “Obamacons” and books on Obamanomics), it’s not completely surprising that Honan has a book deal from Gotham Books for a little paperback based on his site. It debuts August 5. (Note: Honan is a former Mother Jones intern and contributor.)

Mother Jones: What was the genesis of the site?

Mathew Honan: My wife Harper and I are both avid cyclists. Harper is absolutely consumed with cycling; it’s what she talks about all the time. Just before Super Tuesday she just went full-bore Obama. It was all she could focus on. She was canvassing, making phone calls, spent all Super Tuesday standing outside with Obama signs around town. So I said to her, “Barack Obama is your new bicycle.” She thought it was funny; I thought it was funny. And then on February 13, I was going home from the library on the bus and I started thinking how Barack Obama is kind of like the whole country’s new bicycle. I had the idea for the site around 5 p.m., and it was live by around 9 p.m.

MJ: Which of the imitator sites is your favorite?

MJ: Why do you think it’s been so popular?

MH: I think to some extent it is kind of an empty vessel. I’ve had people convinced it’s an anti-Obama site. I’ve had people convinced it’s a pro-Obama site. And I didn’t intend it as either of those things. I was just trying to comment on the fervor there is for Obama and the excitement that he has generated in his supporters. I think it was popular because people who didn’t necessarily support Obama found it funny.

MJ: So you have all these things about Barack on the site, that he saved his dessert for you, he set your voice as his ringtone. But what do you really like about Obama?

MH: The two things I like best about him are that first, he is electable, which is important to me in a way it didn’t used to be. I’m 35 and he’s the first person where I believe in the candidate and I believe in his ability to make it to the White House. Second, I do get the sense that he’s someone who can begin to bring the country together more so than we’ve seen in the past 16 years. The past two administrations have been progressively more polarizing, and it’s fundamentally bad when our society has two tribes in opposition, and when you have someone ostensibly leading the country who 49 percent of the country hates.

MJ: Have you had any response from Obama?

MH: Some of his bloggers put it on his campaign blog and put links to it. But I haven’t heard a peep from [campaign people], and I don’t know if that’s good or bad. Though, Barack Obama has a Flickr site, and one of the things I put on the site was “Barack Obama favorited your photo,” and he did favorite my photo on Flickr. Or someone from his campaign did. So that was kind of neat. I don’t think they mind it.