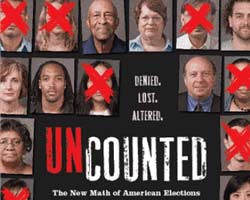 Long lines. Misallocated voting machines. Voters inexplicably purged from the rolls. Sound familiar? Through interviews with activists and policymakers, filmmaker David Earnhardt surveys these and other symptoms of America’s ailing electoral system in the documentary Uncounted. While the film ends with sound advice—volunteer to be a poll worker; lobby against paperless machines, and support a national holiday on election day—the bulk of Uncounted relies less on facts to back its claims than on a canned, conspiratorial score.

If at times facts presented in Uncounted are often seem to you overly suggestive and or downright implausible, trust your instincts.

At one point the following text appears on the screen (accompanied by ominous cello notes): “Two voting machine companies—ES&S and Diebold—electronically counted 80 percent of the votes in the 2004 presidential election. Both companies have extensive ties to the Republican party.” Source: Baltimore Chronicle 12/09/04.”

Click over to the Chronicle, an online newspaper, and you’ll find that it did indeed run an article containing that 80 percent figure—as a directly quoted citation of the American Free Press. Click over to the Free Press, and you’ll find a fringe-right conspiracist website. Click around their site some more, and what do you find? That one of their primary focus coverage areas is the nefarious influence of international Jewry. And that’s just one of their favorite conspiracy theories.

Unsurprisingly, when I ran the 80 percent “factoid” by Kim Brace, a respected voting expert with the consulting firm Election Data Services, he called it “totally wrong.”

Perhaps, as with voting itself, indictment of the voting system is an exercise better suited to print than to a screen. That way, viewers can more easily check the facts for themselves.