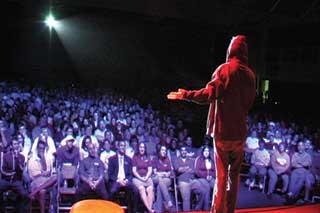 Coarse, crass, and surprisingly smart, Heckler has a chip on its shoulder, but also has a lot on its mind. Inspired by coproducer Jamie Kennedy’s experience as an oft-mocked comedian, it’s a brisk overview of the state of critical conversation in the Internet age, a raucous look at popular culture from the factory floor, and an occasionally uncivilized call for civility.

Still reeling from terrible reviews of his roles in Malibu’s Most Wanted and Son of the Mask, Kennedy talks to stand-up comics, athletes, and Hollywood creators about how they deal with the barrage of brickbats not just from hecklers but faceless online flamers and professional critics. More than simply a celebrity pity party, the interviews build into a critique of how the combination of anonymity and an audience allows people to say things online that they might not if they had to put their name and face to the words. Heckler also looks at the corresponding shift in mainstream criticism from the analytical to the personal. Performers, it seems, don’t mind if you judge them so long as you do it constructively. As comedian Patton Oswalt advises, “If you’re just sitting in the darkness and yelling ‘You suck!’…Okay—show me why I suck.”

Heckler has its bizarre, blunt moments, such as the late comic Bill Hicks chasing a heckler out of a performance with a torrent of profanity, and a struggling actress who reveals (literally) why her fans have suggested that she surgically enhance her breasts. Some of Kennedy’s interview subjects are surprisingly astute (Arsenio Hall and Carrot Top—who knew?) and some are predictably self-serving (Roseanne Barr and director Joel Schumacher). Though spotty at times, Heckler is a compelling inside look at the widening gulf between insightful cultural conversation and insults shouted from the dark.