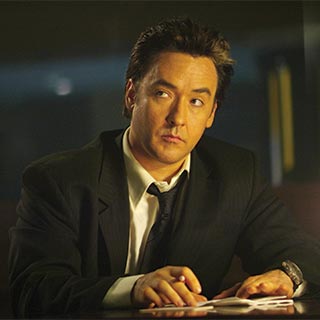 
Okay, I won’t lie. The prospect of talking with John Cusack was almost as exciting at 40 as it would have been as a teen. After all, he has embodied every phase of angst of those of us who grew up in the ’80s, from teen dating dilemmas, to horrific high school reunions, to making lifetime commitments (which he hasn’t, at least publicly). But War, Inc., which he cowrote and produced, is a different kind of film. True, he plays a nihilistic hit man (slash trade-show promoter) struggling with love and morality, just as he did in Grosse Pointe Blank. But this film—in which his character fixes problems for a Halliburtonlike company that runs the “first war ever to be 100% outsourced”—is much darker, angrier, and so jam-packed with obscure references to the war on terror, venal corporate-branding strategies, and private military contractors that even this editor of Mother Jones struggled to keep up. Going from teen heartthrob to Shock Doctrine devotee could easily make one a deadly annoying jerk, and I worried he’d shatter expectations 25 years in the making. But not to worry, ladies. He seems just as smart, and smart-assed, as the characters he plays. Maybe he just needs a good editor.

John Cusack: How are you doing?

Mother Jones: I’ve got a cold, so if I start sneezing, just know that the 16-year-old on the inside is dying of embarrassment.

MJ: Yeah, I’ve been watching you since then; we’re basically the same age. Speaking of which: Perhaps more than any actor, you symbolize the angst and ambivalence of our generation, Generation X. In many roles you’ve turned to the camera and given an almost pop-Hamlet speech, weighing whether or not to act. Does that kind of role appeal to you? Or is it typecasting?

JC: I guess it’s a modernity thing, right? And probably something about being an artist, feeling like you’re not a part of the pack. There’s also some element of coming of age during the Reagan administration, which everybody has painted as some glorious time in America, but I remember as being a very, very dark time. There was apocalypse in the air; the punk rock movement made sense. I mean, that’s the political answer to the question.

MJ: Your characters are usually engaged in a personal struggle to figure out where they are in the world. But War, Inc. is a satire of where America is in the world. How did that come about?

JC: I don’t think people knew that the Bush agenda was going to be as radical as it was in implementing the Milton Friedman playbook of radical privatization—what Naomi Klein calls “disaster capitalism.” As Iraq was still on fire, literally, Paul Bremer rode in, dressed like my character in his Brooks Brothers suit with his military boots, the uniform of the disaster capitalist. It was a messianic fantasy where Iraq was going to be a free-market utopia. Now, when it’s the clusterfuck that it is, they say this is just a failure of management. The lies and the hypocrisy are so savage that your eyes start to water.

MJ: Do you think America’s ready for a dark satire about the war on terror? Often the satires that reverberate with the public are at least a decade behind actual events.

JC: In a weird way, that’s not really my job. My job is to just express something that I want to express. And if I’m ahead or behind the curve, that’s for others to decide.

MJ: There’s an almost Pynchonesque use of names. Your character is Brand Hauser—”house brand.” And Hauser works for a Halliburtonlike company called Tamerlane, presumably after the Mongol warlord. And Hilary Duff does this hilarious turn as an oversexed Central Asian pop star named Yonica Babyyeah. What was the writing process like?

JC: I got to work with two wonderful writers. Mark Leyner, who’s a Célinelike writer with an electric, eclectic, corrosive aesthetic. And Jeremy Pikser, who wrote Bulworth. We figured we’d try to make an incendiary political cartoon, shifting from absurdity to seriousness to pratfalls to melodrama to Telemundo soap opera.

MJ: Yeah, and did I hear a Michael Bacon joke fly by? Is that for the genius round of Six Degrees of Kevin Bacon?

MJ: Because when I encounter lines like, “Get me Katie Couric, Al Jazeera, and 100 gallons of sheep shit,” I’m like, That had to be fun to write. Was this an entirely sober writing process?

MJ: This is also the first press release that’s ever come across my desk touting the role of a “sexy left-wing journalist.” Speaking for all of us, I have to thank you for that.

MJ: The film is also a salient critique of journalists, who report via something called the “Implanted Journalist Experience,” a sort of virtual reality/Six Flags ride of the battle space. Is that your take on where journalism stands now?

JC: Well, that’s a tricky one. The real reporting we’ve gotten from Iraq has been from really brilliant, courageous journalists who put their lives on the line. So I wouldn’t say that that is an indictment of journalists in the field as much as the state of journalism. But as far as the pundits who sit on television every night and repeat the talking points given to them by the administration—they might as well have a chip in their head.

MJ: You got the, um, august John McLaughlin to participate, which was a fun touch.

JC: Once he signed a waiver, we never looked back.

MJ: Are there dangers of mixing politics and celebrity? Folks like Susan Sarandon have taken it on the chin for doing so.

JC: I think you have to consider the source. Usually they’re pundits, right? And they get in front of a camera and wear makeup and sometimes other people write their lines. Who does that sound like? Fox News gave you a cable show, and you’re going to call yourself a journalist?

MJ: When you were a kid, we were all watching you. What movies were you watching?

JC: Oh God, I don’t know if you were all watching me. But I was watching all sorts of movies. My dad had a commercial film company, so he had a videotape player before anyone. So he got Mel Brooks movies or Citizen Kane or some classic old movies. And every summer the revival house in Evanston would show the great films from the ’50s and ’60s and ’70s. And I remember just loving them all.

Craig Schwartz, Being John Malkovich
Angst: Is attraction about the mind or the body?
Takeaway: Play puppet master at your own risk.

Rob Gordon, High Fidelity
Angst: Can fears of commitment be solved by the perfect mix tape?
Takeaway: You can’t always get what you want, but if you try sometimes…