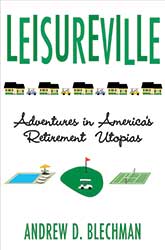 More than 2 million American adults live in age-segregated communities where anyone under 18 is welcome only as a temporary guest. In Leisureville, Andrew Blechman embeds at the largest of these outposts of maturity to learn more about the allure of growing old in style. Spanning three Florida counties and more than 20,000 acres, the Villages is home to 75,000 people, with thousands of new homes on the way. Residents, median age 66, prefer golf carts to cars; some drop 25 grand on “leisure chariots” tricked out with supersize aluminum wheels and chrome grilles. A Villages-only newspaper offers just good news. And of course, there’s bingo, line dancing, wine tasting, and…lots of partying. As one resident remarks after returning from a cruise, “I’m not even sure why I went. We live on a fucking cruise ship.”

The ageism practiced by the approximately 1,500 “gated geritopias” is actually the only form of housing discrimination sanctioned by Congress. Under the logic that special services are needed to support an aging population, they may exclude families with children under 18.

With 78 million boomers hitting retirement age and seniors-only communities recruiting 55-year-olds, Blechman raises the prospect of a significant portion of the population retiring into never-never land. Some communities have gone so far as to cut their financial ties with local school districts and vote against paying some of their local taxes. Blechman doesn’t have much respect for elders who try to escape the social contract in their golden years. “That’s not citizenship,” he writes. “That’s secession.”