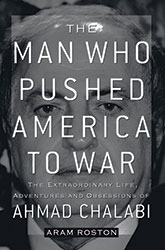 The Man Who Pushed America to War: The Extraordinary Life, Adventures and Obsessions of Ahmad Chalabi, By Aram Roston. Nation Books, $27.50.

Who is Ahmad Chalabi, really? A scheming manipulator, a corrupt businessman, a political visionary, or all of the above? In The Man Who Pushed America to War, Roston, an Emmy-winning investigative reporter, tries to solve the riddle of the man who would have been president of Iraq and how he captivated neoconservatives with his vision of overthrowing Saddam Hussein and bringing freedom and democracy to the Middle East.

Much of Chalabi’s story is well known (see “Heroes in Error” in the March/April 2006 issue of Mother Jones), but Roston weaves its disparate parts into a coherent narrative. He follows Chalabi through his various incarnations, starting as the brainy, exiled son of Baghdad’s ruling elite who headed his family’s international business empire. Roston provides an overdue explanation of how Chalabi treated his Petra Bank as a private slush fund, fleeing into the night when his embezzlement was discovered by Jordanian authorities. Next came Chalabi the dissident, the Iraqi National Congress head who devoted his every waking moment to guiding America into war with Saddam. Finally, we meet today’s Chalabi: Rejected by his American patrons and allied with Shiite warlord Moqtada al-Sadr, he’s a floundering has-been. (Or is he?)

More than just a biography of a chameleon, Roston’s book is a fascinating, if dispiriting, look at the mechanics of power in Washington. Time and again, Chalabi, “an extraordinary dining companion,” wins the loyalties of key political players by sheer force of personality. (Chalabi’s gustatory skills are presumably the reason for the book’s bizarre focus on his undulating waistline and his enthusiasm for the Atkins diet.) Despite parsing the minutiae of his bloated ambition, Roston never nails down a satisfactory answer for what really drives Chalabi. But this portrait will surely be recognizable to those who fell into Chalabi’s orbit, not realizing their mistake until it was too late.