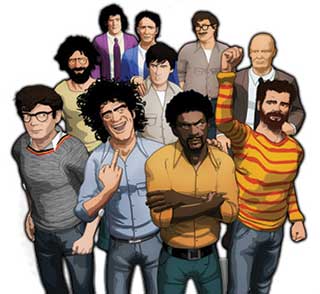 The first odd thing about Chicago 10 is the title. It’s a confusingly inflated reference to the Chicago 7 conspiracy trial that pitted a motley crew of seven counterculture figures including Abbie Hoffman, Jerry Rubin, and Tom Hayden against, well, the Man. The decision to tack on three extras—Black Panther Bobby Seale (who was booted from the trial) and two defense attorneys—to an iconic label is one of many moments of unnecessary embellishment in the spirited yet messy new documentary by Brett Morgen.

Chicago 10 tells the story of the 1968 Chicago Democratic National Convention, the bloody police crackdown on the anti-war kids who protested it, and the subsequent trial, in which the protest organizers were accused of conspiring to incite a riot. Instead of the usual narrator and talking-head approach, the film uses a manic combination of archival footage and animated scenes based on the original courtroom transcripts (with voices supplied by Hank Azaria as Hoffman, Jeffrey Wright as Seale, and Liev Schreiber as lawyer William Kunstler). Jerry Rubin described the trial as a “cartoon show,” and the slick cgi scenes capture the defendants’ antics, the doddering judge, and Seale being bound, gagged, and ejected from the courtroom. It’s never clear what’s historically accurate and what’s been abridged or exaggerated, however. And the relentless ’90s soundtrack is baffling: Why play a Rage Against the Machine song as the backdrop for cops clubbing yippies when a little Jimi Hendrix would have done the trick?

Despite its gimmicky attempts to appeal to non-boomers, Chicago 10 is still weirdly enjoyable. The story of the Chicago 7 still resonates today, and the clips of Hoffman’s sarcastic quips and pranks are charming. Morgen’s award-winning The Kid Stays in the Picture took liberties with both the documentary and biographical forms, with remarkable results. Too bad he didn’t use his talents to better tame the chaotic events of 1968.