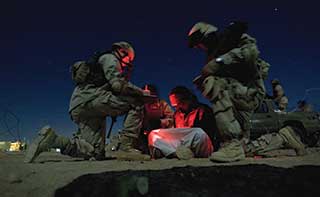 In December 2002, a young Afghan taxi driver named Dilawar was hauled off to the military detention center at Bagram, north of Kabul, and held as a suspect in a rocket attack on an American base. Five days later, after being hung by his arms and repeatedly beaten, he was dead. His legs were so thoroughly ravaged that they were described by a coroner as “pulpified.” He was later determined to have been innocent.

Dilawar’s story frames the damning case against America’s use of torture presented in this infuriating documentary.
Taxi to the Dark Side obliterates any notion that the abuse of suspected terrorists is the consequence of a few bad apples. “You put people in a crazy situation, people do crazy things,” explains Damien “Monster” Corsetti, a former Army interrogator who started at Bagram and wound up at Abu Ghraib. (For more on how tactics used in Afghanistan were exported to Iraq, see Emily Bazelon’s “From Bagram to Abu Ghraib” in the March/April 2005 issue of Mother Jones.) Corsetti is part of an impressive array of witnesses, experts, and apologists who go before the camera spilling details as absurd as they are frightening. Corsetti describes screaming the ingredients from the side of a cereal box at a prisoner, simply because he’d run out of things to scream. Acquitted of charges of abusing detainees, he points the finger at his superiors, who he says intentionally declined to set clear limits. “And they wonder why it happened,” he chuckles.

Taxi includes an abundance of chilling footage, including uncensored images from Abu Ghraib. Yet somehow the most terrifying sight is of Vice President Dick Cheney declaring, “We have to work sort of the dark side, if you will…It is a mean, nasty, dangerous, dirty business out there, and we have to operate in that arena.” By the end of the film, director Alex Gibney (who also directed Enron: The Smartest Guys in the Room) makes it clear that torture was sanctioned at the highest levels of the Bush administration, and that methods such as waterboarding, beatings, and sensory deprivation don’t generate reliable information, but only breed contempt for the United States.