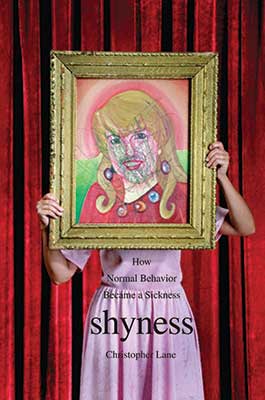 “Shyness is nice, and shyness can stop you from doing all the things in life you’d like to,” Morrissey once sang. It’s a wonder that this classic Smiths song was never used in an ad for Paxil, the Prozac also-ran that GlaxoSmithKline successfully repurposed into a magic bullet for people with “social anxiety disorder,” a.k.a. shyness—now the third most common psychiatric disorder in America behind depression and alcoholism.

To explain how a once-ordinary affliction became a profitable disease, Christopher Lane offers a depressing yet fascinating behind-the-scenes look at the making of the bible of modern psychiatry, the Diagnostic and Statistical Manual of Mental Disorders. In the battle over the third revision of the DSM, released in 1980, neuropsychiatrists triumphed over their Freudian colleagues, implementing a radical new way of diagnosing mental problems—not as broadly defined neuroses, but as distinct disorders with specific symptoms. This seemingly scientific shift opened the door for dozens of new conditions, including one for people who “avoid going to parties”—virgin territory for pharmaceutical firms looking for niches for their existing products.

As Lane reminds us, this wasn’t the first time the drug industry eagerly prescribed psychopharmaceuticals to soothe the anxieties of everyday life. In the 1950s, tranquilizers were marketed to anxious housewives with no mention of risks or side effects. Jump to the present, in which the fda has loosened the restrictions on direct-to-consumer marketing: An ad for Zoloft asks, “Is she just shy? Or is it Social Anxiety Disorder?” Meanwhile, concerns about withdrawal from Paxil and similar antidepressants have been swept under the mat.

The desire to cure shyness isn’t just driven by greed; it’s also fed by basic human fears. Who hasn’t worried about messing up a speech or been tongue-tied on a date? But once you begin relying on drugs to regulate anxiety, Lane notes, unexpected bumps will come up. One of the conditions being considered for inclusion in the next version of the DSM is “apathy.” One reason? Turns out that “psychotropics are a very potent cause of it.”