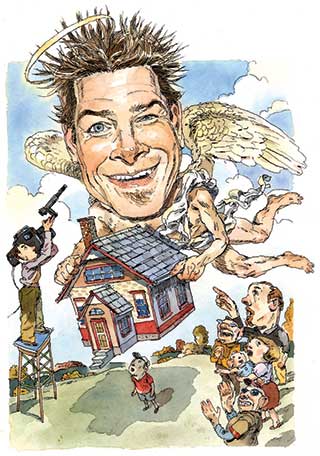 “in charity,” Francis Bacon wrote, “there is no excess.” But then Bacon never saw Extreme Makeover: Home Edition, which since 2003 has been meting out garish and super-sized acts of charity—each more skillfully choreographed and excessive than the last—every Sunday night on abc.

Each week, the reality show’s “design team,” led by cloying carpenter Ty Pennington, parks its tour bus at the dilapidated doorstep of a deserving, downtrodden family and unleashes a whopping assault of good will. After hugging the family, Pennington commiserates in his hushed tone of surferesque sincerity (he often talks to people as if they are crying, even if they haven’t yet started) and then offers hope. “Here’s the good news,” he tells a single mother in Mississippi whose three children have learned to defecate in plastic bags because they have no plumbing. “We’re here now, and things are going to get better.”

Typically, at this point the family is whisked off to Disney World and the design team begins demolishing its house and building a better one—fully landscaped and prominently decorated with brand-name appliances and furnishings supplied by Sears, Home Depot, and the show’s other sponsors—in one week. The family returns to a crowd of neighbors, volunteer builders, and well-wishers chanting “Move that bus!” before the team’s motor coach peels away from the curb, revealing the new home.

Just like that, Makeover plucks poor or working-class people from their misfortunes and not only gives them a new Owens Corning roof over their heads, but—the implication is—newfound stability and comfort. Often the family also gets a new car, computers, or college scholarships for the kids. These changes can be profound. That Mississippi mom, reeling beside her new Ford Edge suv while Pennington shouts, “It looks great, it’s fun to drive, and best of all it’s all yours!” mentions that she’s never owned a new car before. Suddenly we grasp the life-changing enormity of just giving her a reliable vehicle. But wait—here are an iPod, modern art, bicycles, a karaoke machine, Panasonic flat-screen TVs, a collection of African percussion for her son, and a spacious new storefront for her fledgling business. Plus, gospel singer CeCe Winans has turned up to raise the family a nest egg!

We are increasingly tuning in to this brand of life-affirming transformation, whether it’s Ty and the gang framing up a starter mansion, Madonna whisking children out of Malawi and into the tabloids, Oprah opening a school for impoverished South African girls, or Michael Moore—spouting the kind of schmaltzy platitudes Pennington has perfected—delivering sick and forgotten 9/11 rescue workers to the handsome Cuban doctors who will treat them for free.

These are feel-good narratives, meticulously polished to make us feel good about ourselves, too. With each cathartic conclusion, it’s easy to believe that we are contributing to the healing when in fact we are just watching TV. Moreover, the ideal of domesticity into which Makeover deposits its families—the outsized house, the stainless-steel appliances and items from the Sears “Ty Pennington Style” collection—feeds our love of consumption and luxury; nobody tunes in to watch Habitat for Humanity build multiple modest houses. Frankly, the whole package is irresistible. More than once, I have caught myself mouthing “Move that bus!” along with the crowd.

And yet even as I am moved by such acts of kindness, I also feel an uncontrollable urge to cut them down. Makeover is schlock. But as reality TV increasingly concocts its schlock out of actual hardship and actual kindness, deriding it can open some unsettling moral terrain. I felt a certain smugness, for example, watching American Idol‘s “Idol Gives Back” fundraising special last April. There was Ryan Seacrest, fresh from handing out meals to aids orphans in Kenya, clutching a child and urging him to just “let it out.” And there I was: sitting on my couch, eating a tremendous burrito, scoffing at the man who had traveled across the globe to feed orphans.

Clearly, something was wrong. I have never fed aids orphans. I have never built anyone a house. By these measures, I don’t stack up very well at all against Ty Pennington and his cadre of extreme prime-time altruists.

I feel only slightly less conflicted about mocking Makeover knowing that it can’t always deliver the fairy-tale endings it suggests. Several newspaper reports have exposed how some Makeover families wind up unprepared for their new, exponentially higher utility bills and property taxes. A blind New Jersey man with three disabled children and a $14,000 tax bill on his new abode told one paper, “With all the taxes, it’s like we’re on a chopping block.” Meanwhile, five siblings featured on an Easter Sunday 2005 episode recently sued their adoptive parents for driving them out of the nine-bedroom, six-bathroom house built for them. They also sued the show for rebroadcasting their episode knowing that its ending had soured. The kids’ attorney happily revealed to the Los Angeles Times that the show’s touching “door knock” scene, in which the design team first arrived at the house and dispensed hugs, took seven takes to shoot.

Even infrequent viewers will notice how the show has tightened its stranglehold on our consciences by gradually inflating its misery quotient. While the first season featured a couple that needed a larger home for its (surprise!) triplets, only two seasons later we were deep into a gallery of woe: twins with leukemia, the mother of a little girl who wandered off to catch fireflies and disappeared forever. In a memo acquired by the Smoking Gun website, a producer asks the show’s casting agents to look for a kid with “congenital insensitivity to pain”: “There are 17 known cases in US, let me know if one is in your town!”

It’s easy to resent Makeover for the ways it simultaneously helps and exploits its beneficiaries. But when it comes down to it, I resent Makeover because it exploits me. I can feel it bullying me for my compassion, extracting it with a ham-fisted conspiracy of narration, editing, and musical accompaniment. What ultimately offends me about Makeover is that it takes humanity and turns it into bad art. It’s an affront to my aesthetics more than my morals.

There’s some solace, perhaps, in knowing that kindness is popular enough to be shamelessly commodified—that charity sells. And that thankfully, not everyone who comes into contact with the show is distracted by its wretched artifice. “I really think a community could do this without the cameras, without Hollywood,” a Missouri woman told a local paper after Makeover wrapped an episode in her town. After all, all of the labor on the show is volunteer. And while few community groups could get the truckloads of lavish furnishings Makeover does without the kickback of prime-time exposure, not everyone needs cameras trained on them in order to act selflessly.

Wasn’t it stirring to see so many people racing down to the Gulf Coast to contribute plywood, sweat, and compassion after Hurricane Katrina? Witnessing the efforts of volunteers in her hometown of Pass Christian, Mississippi, Good Morning America‘s Robin Roberts felt compelled to remind viewers, “This is not Extreme Makeover: Home Edition. This is true reality TV.”

But even “true reality TV” demands that no act of genuine altruism be left unhyped. And so Roberts signaled for a humongous banner to be pulled away, revealing the progress made on rebuilding one woman’s home. But there was more. “CeCe Winans is going to sing for us,” Roberts smiled. “She’s gonna lift our spirits with song!”