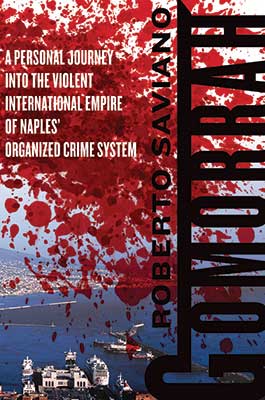 With its hyperventilating subtitle and bloodstained cover, Gomorrah looks like a typical true-crime thriller. But don’t let the packaging fool you. Italian journalist Roberto Saviano’s investigation into Naples’ powerful mafia, the Camorra, is as much a literary lament as a gritty exposé. Though he doesn’t spare the gory details of hits and turf wars, he’s more interested in the moral effects of organized crime—how the residents of his hometown have become its accomplices through participation, acquiescence, or terrified silence.

Saviano takes jobs at a mob-controlled textile factory and a construction site, quietly observing the inner workings of “the System.” Tracing its tentacles, which run through enterprises as far-flung as smuggling Chinese immigrants to the disposal of toxic waste, “means understanding how everything works today everywhere, not merely here.” Meanwhile, the Neapolitan wiseguys take their cues from Hollywood, adopting the term “godfather” and asking their architects to build replicas of Tony Montana’s villa in Scarface.

The swirling cast of characters and allegiances can be hard to follow and Saviano’s prose can be laughably grand: The port of Naples is compared to an open wound, a mother’s breast, an infected appendix, and a “grounded amphibian.” Yet Gomorrah is an engrossing book, animated by a fervor that’s uncommon in American investigative reporting. And there’s an undeniable thrill in knowing that with every revelation, Saviano may be cutting short his promising career as a muckraker.