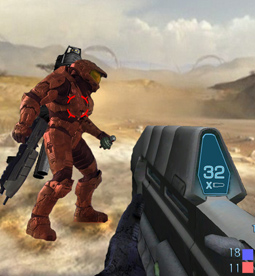 In Washington, the much-anticipated release of Halo 3—dubbed the “Harry Potter of video games”—was celebrated, as most things are in this town, by a private party thrown by lobbyists. In this case the lobby was the Entertainment Software Association, which, in conjunction with the liquor lobby (sorry, the “Distilled Spirits Council“), hosted the event on the rooftop of its Northwest D.C. headquarters. Mother Jones, however, is way too hip and truth-telling and outside-the-beltway to get invited to these types of insider events (at least that’s what we keep telling ourselves). So, on Monday evening, I had to settle for lining up at a Hyattsville, Maryland Gamestop along with several dozen fellow Halo fanatics to await the game’s 12:01 a.m. release.

Every generation of teenage boys has its nerd touchstones, and Halo is my generation’s answer to comic books or Star Wars. Children born in the early and mid-1980s were the first generation to spend their entire childhoods with the video game genre known as the “first-person shooter,” or FPS, the basic idea of which is to move through a series of rooms or areas killing things, usually accompanied by a ridiculous sci-fi plot. (Instead of just watching Luke Skywalker kill Imperial storm troopers, you can pretend to be Luke Skywalker and off them yourself.)

In 1993, id Software released Doom, taking the FPS to a new level and allowing users to game each other online. Instead of pretending to be Luke Skywalker and dueling against computerized artificial intelligence, you could take on a small army of faceless nerds around the world. Think of it as paintball, except without the exercise or the paint. Soon, huge numbers of teenage boys (and later, kids and adults of both sexes—the age of the average gamer is 33) were joyfully slaughtering each other’s electronic alter egos.

Suddenly (as previously non-gaming Americans are learning with the increasing popularity of Nintendo’s Wii, Blizzard’s World of Warcraft, and Linden Lab’s Second Life), gaming became social. The Halo series takes that friendly social competitiveness to its logical conclusion: hundreds of thousands of people meeting up online to kill each other in various gruesome ways. Halo has been hugely successful: Halo 2, the first game in the series to truly integrate online play, sold about 6.5 million copies. By the middle of 2006, the proud owners of those 6.5 million copies (and their friends) had played over 500 million separate games over Microsoft’s Xbox Live service, which matches players according to skill, picks teams, and allows for you to play with friends or strangers. This time around, a million copies were paid for prior to Halo 3’s release and the game made $170 million within its first 24 hours in stores. That’s more than any movie. Ever. Some analysts believe that Halo 3 is likely to eventually gross close to $1 billion.

But there is a significant problem with introducing a social element into games—especially violent ones—since doing so, by nature, also introduces many of society’s problems. Everyone’s heard about people getting addicted to role-playing games. One Nevada couple was recently slapped with a child neglect rap after becoming so engrossed with the online version of Dungeons & Dragons that they failed to care for their children. As a recent Mother Jones Exhibit described, we even outsource our virtual work: over half a million Chinese gamers perform menial tasks within online worlds and sell their virtual rewards to Western players for real money. But Halo has its own set of problems. There’s cheating, of course: You can purchase an (illegally) modified Xbox or retool one yourself, which allows you to hack the game. In the past, I’ve seen players flying, automatically killing their opponents, and teleporting around game levels, among other things. But those incidents are fairly infrequent, and some people are just so good at Halo that they can appear to be cheating when they’re really not. Remember, there are people who actually do this for a living.

Here’s the bigger issue: You actually can converse with your faceless, aliased Internet nemeses. The Xbox comes with a microphone-earpiece headset that resembles those worn by telemarketers (and makes you look like a huge nerd). The headset is supposed to be used for communication and cooperation in team games. But many Halo players have figured out it is also very useful for trash-talking your opponents. And kids really do say the darndest things. I’ve found there are few things more disconcerting than being called a “fucking faggot” or a “bitch nigger” or a “dirty Jew” (literally) by someone who sounds like they’re in elementary school—but may not be. My colleague Bruce Falconer recounts being shot in the back of the head during a Halo game, only to hear his opponent say “fag” and run off. And while it’s not overtly bigoted, there’s also the very common practice of electronic “teabagging” or “corpse-humping,” which the not-faint-of-heart can learn about here.

An old friend once told me that playing Halo online was an eye-opening experience: “I always knew there were racists and anti-Semites and homophobes,” he said, “But I didn’t really know how many there were until I started playing Halo on Xbox Live.” People’s true biases really come out in this virtual and violent world. And there’s no accountability online — no one knows who you are. Although I’ve always made it a practice to report racists and homophobes through Xbox Live’s internal complaint procedure, almost every match in Halo 2 included someone who thought a little racism would liven up the game.

Microsoft surely isn’t the only game company that is dealing with this issue. A now-famous essay called “Bow, Nigger,” published in the U.K. edition of PC Gamer, describes the author’s experience with casual racism in a game called Jedi Knight 2. A popular YouTube video (now offline) documented racism in a game called Tom Clancy’s Ghost Recon. The phenomenon has not been lost on White power groups, which sometimes use online role-playing games for recruiting purposes.

The good news is that Microsoft seems to be taking steps in the latest version of Halo to address the rampant racism and bigotry. Now, instead of freely spewing hate at all comers, you can only talk to your own team in most games, which discourages racist or anti-Semitic trash-talking. Xbox Live’s reporting system has also been souped up, and it’s easier to avoid problem players if you didn’t like playing with them. More importantly, you can now mute other players in-game with an easy click of a button. That’s the parallel freedom at the heart of free speech: you can say what you want, but I shouldn’t have to listen to you. So congratulations to Microsoft — maybe they’ll invite us to their next party now that I’ve said something nice about them — for realizing that. Now it’s high time I go play some Halo 3. You can bet I’ll be using that mute button.