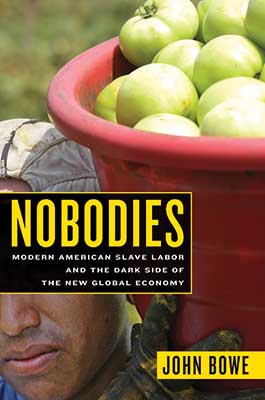 “We buy Granny Smiths picked by slaves in New York and Washington State,” writes John Bowe. “We buy paper from trees planted by workers who don’t get paid.”

Nobodies tells three close-to-the-bone stories of unpaid and forced labor on American soil—a zombie tale about a monster supposedly killed off 140 years ago with the ratification of the 14th Amendment. The first case is a Florida fruit-picking operation where Mexican immigrants are shunted to an out-of-the-way camp in the swamps and threatened with violence if they try to leave. Next, Bowe travels to Tulsa, Oklahoma, to tell the story of a team of welders brought from India on false promises and put to work in a metal shop. Finally, he investigates Saipan, the tiny Pacific protectorate that’s exempt from American tariffs and located close to cheap Southeast Asian labor, making it a haven for sweatshops and prostitution.

In his character studies of the people involved in these cases, Bowe shows the emotional effects of modern slavery on both master and servant. “We couldn’t endure it any longer,” a former fruit picker explains. “Better to die trying to escape.” The bosses, not surprisingly, see things differently. “Real slavery,” says the owner of the Tulsa metal shop, “would be where you bring the guys in, you lock ’em up, you don’t let ’em go anywhere…but you don’t compensate ’em anything.” This from a man who’d taken his workers’ passports and paid them barely half the minimum wage.

The dramatic stories of lies and kidnapping, however, fail to explain why slavery still exists in modern America. We expect the victims’ stories to end in grief, but even the slave owners don’t prosper. If the stories here are typical, a slave economy, besides being repugnant, doesn’t work so well.