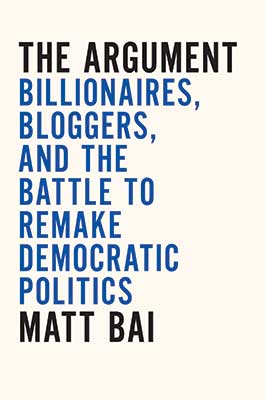 Matt Bai combines the jaded eye of a gossip column with the arc of a Greek tragedy in this incisive tale of Democratic soul-searching. The Argument opens in the aftermath of John Kerry’s defeat, as bewildered and angry liberals grope for a path out of the wilderness of the Bush years. Donors endlessly debate strategy, bloggers inveigh against “Vichy Democrats,” and politicians obsess over “psychographic polling” and “metaphorical frames.” They’re wasting their time, says Bai. Democrats need a new Big Idea, a platform that will help them win elections by guiding the nation through a turbulent era.

A writer for the New York Times Magazine, Bai has deep access to Democratic chieftains and a knack for the polemical vignette. He paints Daily Kos‘ Markos Moulitsas Zúniga as an intellectual lightweight who talks about some of his adoring followers “as if they were shut-ins who had forgotten to take their medication.” George Soros and the billionaire members of the Democracy Alliance, meanwhile, can’t agree on how to lead themselves, let alone the progressive battle of ideas. And Democratic Party bigwigs can’t even agree on a nickname. Nancy Pelosi suggested “the people’s party,” Bai writes, but it sounded too much “like a communiqué from the party headquarters at Pyongyang.”

Brushing off the 2006 “protest vote” that swept Democrats into Congress, Bai returns to the well-worn grievance that the party’s been unable to forge a grand agenda like the New Deal. Bai parrots the case for more robust progressive think tanks to counter the neocons’, yet scarcely explores their work. That he tries so hard to avoid wonkishness says a lot about the current appetite for political ideas. Still, Bai succeeds as a sly observer of the left’s parlor talk, conferencespeak, and off-the-cuff confessions. It’s less the ideas he finds there than those he doesn’t that make The Argument worth picking up.