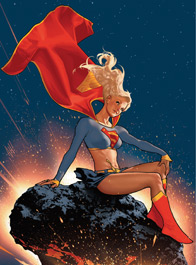 batman needed a new Robin. His previous protégé had quit after his dad found out his teenage son was sneaking off to wear green tights. Then, in May 2004, a 16-year-old named Stephanie Brown stepped into comic-book history as Bruce Wayne’s first female sidekick. When the caped crusader told her she got the job, she jumped in the air and shouted, “This is so totally cool!”

Stephanie’s 71-day tenure as the Girl Wonder started off well. Drawn in a fun, Powerpuff Girls style, she trained hard, and even saved her mentor from a serial killer. But then, in a series of unfortunate events, Batman canned her, she accidentally set off a Gotham City gang war, and finally fell into the hands of a skull-faced villain called Black Mask, who tortured her to death with a power drill.

Her grisly demise hit fans hard, particularly the female readers who’d only just started enjoying the thrill of a Robin they could identify with. After the two previous boy Robins had retired and died, respectively, their uniforms were preserved behind glass inside the Batcave. But Baman never got around to memorializing Stephanie. More than two years later, a grassroots campaign based at the website Girl-Wonder.org is still aggressively lobbying DC Comics to give Stephanie her two-dimensional due. And the flames of discontent only grew higher when DC editor Dan DiDio told female fans at a recent comic convention that in his book, Stephanie “was never really a Robin.”

Of course, sudden-death plot twists are nothing new in comic books. (Just ask Captain America, who was whacked earlier this year after an illustrious 60-year crime-fighting career.) Neither are angry readers: Comic-book fans are known for their fanatical love for their favorite characters—and their ferocious scorn for anyone who dares to mess them up. But the new wave of feminist fangirls has taken this obsessiveness even further, geeking out about the ways that superwomen are shortchanged by dumb story lines, flat characterization, and titillating art. They love their comics as much as the sweatiest fanboy—and they hate nothing more than when real-life problems like the glass ceiling intrude on their escapist fantasies.

Ever since the pulpy era of tales like “Lois Lane, Slave Girl,” women in comic books have usually been stuck as tagalongs, also-rans, and girlfriends who try to tie down male heroes with marriage. With very few exceptions, comic-book writers and artists have been men, and they’ve assumed most of their readers were, too. But despite the genre’s teenage testosterone appeal, there have always been dedicated fans like Gail Simone, who grew up in the 1970s enjoying the all-American ritual of buying comic books at the convenience store and curling up with four-color fantasies about fellow redhead Batgirl. As she got older, Simone noticed that a dark undercurrent was creeping into her favorite titles as they pushed a new “grim ‘n’ gritty” aesthetic. Batgirl was shot in the spine by the Joker, who then took obscene photos of her.

In the late ’90s, Simone started keeping track of plot twists in which supervillains would rape or brutalize female characters on her website, Women in Refrigerators. (The name refers to one particularly gruesome incident; see “When Bad Things Happen to Superpeople,” above.) Now an entire universe of feisty feminist fan sites has appeared, including When Fangirls Attack and online columns such as “Girls Read Comics (And They’re Pissed).” They’ve identified trends such as “porn face,” one male artist’s habit of drawing every female character with the same faking-an-orgasm expression. And they’ve added an estrogen-fueled spin to their passion for minutiae: Is the female leader of the Mighty Avengers really in charge, or is she just a figurehead? Why doesn’t Wonder Woman know how to pump gas? Did Spider-Man’s radioactive sperm really kill his wife?

Lately, they’ve been focusing their powers of deconstruction on Supergirl, Superman’s underage cousin. After spending decades as the Man of Steel’s blond, bland counterpart, she was recently recast as jailbait, trading her long-sleeved top and cheerleader skirt for a midriff-baring micro-costume (supposedly designed by Superman’s Midwestern stepmom). Bloggers diligently dissected every up-skirt image of the new Supergirl gone wild, who seemed to spend more time flaunting ass than kicking it. In response to the bad buzz, in January Supergirl editor Eddie Berganza issued an open letter to his female readers. “Women,” he began, “Who needs them? Well, actually…I do.” He begged the “ladies” to “give Supergirl a shot,” explaining that he’d gotten a “woman’s point of view” on the character from a female assistant editor. He also promised that Supergirl would gain some weight and would date a “mimbo” who was as much of a mindless pinup as she was.

Clearly, Berganza was missing the point. Female fans want the same thing as male readers: well-written stories and believable—okay, sort of believable—characters. “You can’t just promise to add some weight to Supergirl’s frame and expect women to care about a poorly constructed character,” says blogger Rachelle Goguen. DC has since replaced Berganza with Matt Idelson, who had previously revamped Catwoman from a sex kitten to a reasonably dressed badass. Idelson has promised that Supergirl soon will be “more user-friendly.”

“The victory with Supergirl was important, and the stakes were high,” says Valerie D’Orazio, a former DC Comics editor who blogs as Occasional Superheroine. Though she accepts some of the blame for tarting up Supergirl during her tenure, she believes that comics creators are starting to think twice about indulging the kinds of fantasies that have driven plotlines during the past decade or so. D’Orazio caused a stir a couple of years ago when she wrote about a meeting where male editors told her, “We need a rape.” She says such clumsy attempts at edginess are dwindling, not necessarily out of sensitivity but because publishers want to make money. Bad publicity from vocal fans is Kryptonite for business: Supergirl‘s sales plummeted nearly 50 percent in the past year.

Some of the guys who write comics are listening. “I’m conscious that female characters have been treated poorly for much of comics’ history, and I don’t want to fall into the same traps,” says Superman writer Kurt Busiek. Brian K. Vaughan, who has written The X-Men, says he’s developing more interesting female characters “to raise the dialogue about comics beyond, ‘Could her boobs be smaller?'”

While fans have long been content to lob criticisms from the safety of their fortresses of solitude, more women are taking the leap from critics to creators. Gail Simone has joined DC Comics and chronicles the adventures of the former Batgirl—now a paraplegic master hacker who sends female agents out to kickbox on the wings of fighter jets. She’s won praise for her well-realized female characters and is slated to become the new Wonder Woman scribe. Simone says she is meeting more women who want to break into the field. “The revolution is happening,” she says.

But the revolution isn’t trying to change comic books’ enduring appeal. Boy nerds love stories of outcasts who come into fantastic powers. Simone says that girls love these tales for similar reasons: They allow girls to imagine rescuing themselves instead of waiting for a white knight to show up. Feminists’ favorite superheroes still squeeze into spandex and leather, and rely on cartoon violence and outlandish toys to solve their problems—just like the guys do. In one recent episode written by Simone, the fishnet-clad Black Canary is captured by a bunch of thugs, whose leader taunts her, “Shouldn’t you be preparing my evening meal…naked?” She proceeds to lay waste to the entire gang, her fists, feet, and elbows soaring in controlled arcs of fury. “I am the Black Canary,” she declares. “And I take $%$@ from precisely NO ONE.”