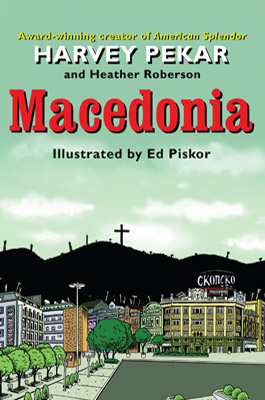 Harvey Pekar is best known for his navel-gazing comic series, American Splendor, in which he enlists celebrated artists to illustrate tales of his humdrum life in Cleveland. His latest graphic novel is a departure from that trusty format. Instead of following a grousing Pekar, it tells the true-life story of Heather Roberson, an optimistic Berkeley peace studies major who travels to Macedonia in hopes of using the country’s avoidance of the post-Yugoslavian bloodshed to prove that “war isn’t, y’know, inevitable.”

Pekar, Roberson, and 25-year-old illustrator Ed Piskor are an interesting trio of talents, but they don’t mesh as Pekar did with previous collaborators such as R. Crumb and Joe Sacco. Perhaps that’s because Pekar’s not writing about himself or because Piskor has never seen Macedonia. It doesn’t help that Roberson’s research, the basis of the script, makes Pekar’s life as a filing clerk seem downright stimulating. While she delivers lengthy manifestos on Balkan history, Piskor draws her talking into her tape recorder in her hotel room. (Not that international affairs and comics can’t mix—just see Sacco’s masterpieces Palestine and Safe Area Gorazde or Marjane Satrapi’s Persepolis.)

Roberson does learn how the Macedonians avoided going to war, but there’s no big payoff. The most memorable parts of her trip involve getting cheated, being accosted by strange men, and looking for a decent cup of coffee. At these times, you can feel the old Pekar peeking through the pages, chronicling the endless frustrations of everyday life.