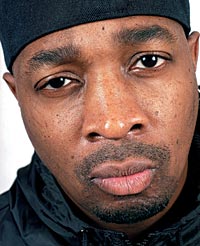 Twenty years ago, Chuck D unapologetically announced that he was the “poetic, political, lyrical son” in the rap song “Public Enemy No. 1.” The front man for the rap group Public Enemy has sent shockwaves ever since, through his lyrics on nearly 20 hip hop albums, as a composer, actor, author, political activist and producer, and as a radio personality on the progressive talk-radio network Air America.

With Public Enemy’s 20th anniversary tour in full swing, his “hit it and quit it” style of rapid-fire news commentary in regular rotation on Air America’s “On the Real,” and a recent appearance as a panelist at Tavis Smiley’s 2007 State of the Black Union conference, Mother Jones took a minute to check in with Chuck D about his work in 2007.

Mother Jones: I heard a portion of Black Think Tank member Julia Hare’s speech at Tavis Smiley’s State of the Black Union event. She made an interesting distinction between “Black Leaders” like Martin Luther King, Jr. and “Leaders of the Black Community,” more or less appointed by a predominantly white, dominant culture media. What did you think about her comments?

Chuck D: I thought she was right on. There are those anointed to be safe for the American population or for the public, and there are those who lead blacks into a direction where we can actually understand who we are, and where we can be considered part of the citizenship of America. We are not complete. Right now, the black American family in America is incomplete and displaced. It’s not that different from 1965. We’ve got practically the same unemployment rate, an increase in blacks in jail; you know, that type of thing. In education, grades are down, etc. The net on black America is down.

MJ: What did you speak about at the event?

CD: The responsibility of artistry, the projection of black images, consistently being dogged and ragged. My advice was that there is something we can do. Black America needs access. The Civil Rights era was based on a “we” agenda, as opposed to “I.” Now, we have individual successes that do nothing for the “we.”

MJ: What are some examples?

CD: Oprah and Bill Cosby. What does that do for the average person? It’s like saying, “Who are the great white people of America?”

MJ: What was most significant to you about the 2007 State of the Black Union?

CD: I felt like I was among a smart black family that doesn’t get enough props. Blacks are encouraged for their entertainment, but our intelligence and ideas are still, in 2007, pushed in the background as not sexy enough to sell. Black folks are judged by quantity, not quality. It’s a decimal point or figure. How different is that from slavery? There’s no moral code, it’s just about successful business for America. When we talk about business, all business is not good business. People avoid the race issue, but we can’t talk about blacks in America without talking about race, healthcare, environment, police enforcement, education and economics. All that comes in. It might be too heavy for people to deal with.

MJ: Is there anything specific you think can be done make a difference among the black community, particularly black youth?

CD: I encourage more blacks and people of color to get a passport. That’s one way to help put people on an equal platform. Only about 23% of Americans – not just blacks, but Americans period – have a U.S. passport. That is pathetic.

MJ: Why focus on passports?

CD: Because people need to think outside of their immediate community and what’s right in front of them. If it’s not on BET or a black radio station, a lot of people won’t know anything about it. If you go get a passport, it might encourage you to at least consider the world around you.

MJ: Ian Inaba’s 2006 film “American Blackout” documented conditions at polling places in black and lower-income neighborhood, including understaffing, limited number of voting booths, and long lines of people waiting in the rain, etc. How do you respond when you hear reports like these?

CD: If you study propaganda, you go back to Nazi Germany, which was not too far ago. The Jewish community bonded together to say “never again.” If black folks patterned after the Jews, racism would go to the second notch. It’s a whole bunch of tricks in the game; politics, religion, that keep black folks confused. Black folks are judged by physical characteristics, not intellect. Instead of playing, we’re getting played. And most people playing don’t know the damn rules. Jews were able to use religion to keep people bonded, but religion doesn’t work for black people, because we are based on how much color we got on our face or some shit. With black people, there are 50 Hitlers over the course of history.

MJ: You’ve always put political viewpoints like these into your music. After the Hurricane Katrina disaster, Public Enemy released the song “Hell No We Ain’t All Right!” and the album “New Whirl Odor.” Was writing and recording the song and the album helpful in dealing with the New Orleans debacle?

CD: The song was important to do. I felt it was something to be written about. [Public Enemy] is playing New Orleans in March. It feels funny to go there and play a paid date. The city has been built up some, but…I have to discuss this with the band and make clear the importance of it. Maybe I’ll take my portion and donate it. I feel funny playing New Orleans for money. We also play Houston, and a lot of people in the area are from New Orleans. I’ll have to decide what I want to do about that.

MJ: Public Enemy has been performing and recording hip hop music for 20 years, and you’ve been touring again recently. How is that going?

CD: We never stopped touring as a band. This is Tour 57. We tour once every four years like an eclipse. We did 98, 2002 and 2006. It’s been great, great and great. We are the Rolling Stones of the rap game. We are a show that combines Run DMC, The Roots and Rage Against the Machine.

MJ: A lot has happened to hip hop in 20 years. How do you think Public Enemy fits into the scene in 2007?

CD: When people see us, they look at us and say wow, that’s hot. The live show is a big part of our music. If you’re an artist and a performer, and you don’t perform, what’s that about? People need to really get down. In hip hop today, you see more instrumentation, with a full band and turntables. We’ve added more flexibility to our show over the years. We call it the greatest hip hop show on earth. Hip hop has adapted itself to the root of how we made records in the first place. A lot of people thought The Roots were hip hop’s first live band in the 90s, but [80s hip hop band] Stetsasonic set the blueprint. And in the Bay area, [Oakland-based alternative rap group] Digital Underground did it. For Public Enemy, it’s not just about throwing a band together, it’s a systematic understanding of music.

MJ: How are you applying your philosophies about music to your record label SLAMjamz?

CD: SLAMjamz has been the most rewarding experience. We’ve been online since 2001. We have eight reliable studios and 30 artists. Instead of selling songs, we are in the game of licensing and placing songs in key areas, like commercials, video games, and TV. It’s a whole different paradigm of getting the music out there.

MJ: How do you run the label?

CD: I tell each artist they have to grow toward a revenue stream. In the past, people were going to record stores and buying albums or CDs. And the label was exposing their artist as much as possible and maybe getting them picked up by a major. Now I tell people to cut a good tune and have it up in the marketplace the next day. You better be prepared to give it away, and people will come pay to see you. Dave Matthews is a good example of the phenomenon of performing. They’re a jam band. It’s not about the record. I love that. There’s nothing worse than a good video and good song, and you see a band and hate them because they can’t perform. That’s wack.

MJ: You even testified before Congress in support of peer-to-peer mp3 file sharing. But not all musicians agree with you on the subject. Why do you embrace it?

CD: Some artists are told what to like and told definitions of what the music business is. That’s a problem. Music is artistry, and you want your music heard, your act known. But artists don’t know. They are ignorant the minute they sign a contract.

MJ: You’ve been able to express your views on the Air America shows “Unfiltered” and “On the Real.” Why did you get involved with those programs?

CD: It was important to understand the current political climate in America, when Bush was running for office. My duty was to inform and be a voice for people with a point of view different than the dominant right-wing side. So I involved myself. Then it came down to people looking at Air America and saying it had shaky backing, and was not making money. But why the fuck does everything have to be about money? Slavery was incredibly prosperous for some people, at that time. It was not a bad business plan, but it was terrible and inhumane. But as a business it worked. Air America’s failure as a business is not the point.

MJ: The execution of Tookie Williams exemplifies some of the larger issues of race and leadership in the black community that we’ve been discussing. What was your reaction to his execution?

CD: That was just an introduction into the discussion of what black folks don’t have, such as access to education, economics, the environment, law enforcement, and our understanding of what these things are. If you don’t provide the proper tools in America, there will be side affects. [Tookie] should not be fully exonerated, but things cannot be treated with a broad stroke. It was a mockery at black folks and people who said that a life can be turned around. It’s almost like a taunt, like “Yeah, niggah, you ain’t doing a damn thing. What are y’all going to do? Are you going to die with him?”