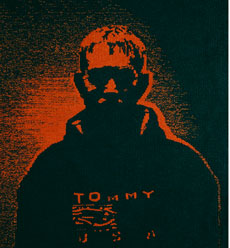 Unless for those inclined to collect quilts or obsess about knit quality, an exhibit of textiles and fabrics probably wouldn’t turn most people on. But the Textile Museum of Washington, D.C. has added the color of passion to their latest exhibit, “RED.”

In time for Valentine’s Day, the exhibit illustrates the significance of red in its endless shades throughout world history. Visitors to the exhibit will surely expect items of obvious connotations—perhaps a bull fighter’s cape, a show-stopping dress and a velvet curtain. Since the Textile Museum aims to collect threads of non-European origin, “RED” leads visitors to reevaluate their own cultural perceptions.

Once an insult lobbed at suspected communists, red is forgotten in the digital language of CMYK (for cyan, magenta, yellow and black). But it was in the 2000 election that red was officially deemed to represent the G.O.P.—inciting a rivalry between red and blue states that now seems to have been around forever.

Before synthetic dyes, creating the color took more than a few clicks of the mouse. Also on display, a traditional Mexican woven dress from Oaxaca that was dyed with cochineals, small dye-producing bugs that live on cacti throughout Mexico. The dye extracted from the insects was the second biggest export to the New World before the invention of synthetic reds in the late 19th Century.

In a Peruvian tunic border garment, a Turkish velvet panel, a Navajo rug, a Berber shawl, a ball gown and an AIDS Awareness Ribbon, the cultural meanings of red are boldly displayed. Overall the exhibit is an intriguing commentary on concepts taken for granted in the very fabric of our culture.

“RED” is on view from February 2 through July 8. For more information, visit the museum’s website. The museum is also planning red-themed movie nights that will include showings of “The Red Violin” and the Krzysztof Kielowski-directed “Red.”