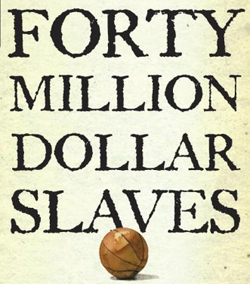 $40 Million Slaves : The Rise, Fall, and Redemption of the Black Athlete
By William C. Rhoden
Crown. $23.95

Sports, for some, represent the best in humanity, where talent and muscle can transcend difference and prejudice: Jackie Robinson, Muhammed Ali, Althea Gibson—pioneers whose accomplishments beyond sports are legend. But these legends, says William Rhoden in Forty Million Dollar Slave may be just that, amounting to a crutch for modern day race relations. A New York Times sports columnist for decades, Rhoden chronicles a sweaty history that has meant wealth but not always progress, and prosperity for the black athlete—the $40 million slave—who is far from free.

Rhoden gives the bench players of history their due. Like Arthur “Rube” Foster who created baseball’s Negro League in 1920, which still stands as the only sports operation owned, managed and played by blacks. Says Rhoden, “Integration in sports—as opposed to integration at the ballot box or in public conveyances—was a winning proposition for the whites who controlled the sports industrial complex.” Foster was a pioneer of a different sort, “an uncomprising guiding light,” ultimately undone by a nervous breakdown in 1926.

Today’s legends, those with perceived “black power,” like the deified Michael Jordan, seldom wield it. “What [Jordan] did to inspire the multitudes—that core of black people estranged from power, the seemingly permanent underclass—beyond hitting game winning jump shots, is hard to find,” Rhoden writes.

Peppered with historical gems and did-you-knows, 40 Million Dollar Slaves weaves together the twin strands of innovation and struggle that today define adrenaline-filled arenas. Jackie Robinson actually integrated baseball in Canada, signing with Montreal in 1945, (the Dodgers bought his contract in 1947). The alley-oop was actually a football invention and horseracing and cycling were once dominated by African Americans.

It’s the unsung heroes from Robert Molineaux to Foster to Curt Flood, dozens of stories of men (nearly all) whom we don’t know precisely because they sought change and often lost. And thus today Americans, of all races, pour $34 billion a year into sports—from ticket sales to merchandise—while just a sliver of those revenues go to the “black muscle” that creates it, and next to nothing goes into the communities from whence that muscle came.