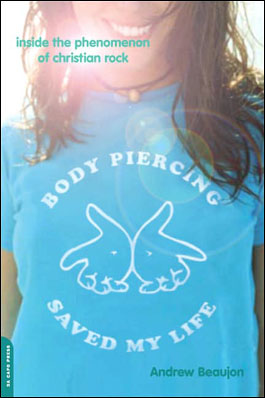 If you remember “supafly, straight-edge” Matt from The Real World: New Orleans, you’ll recognize the type—the kid with the spiked hair and skateboard who says he lives for music, but doesn’t swear or drink and wears a “Crunk for Christ” T-shirt. This seemingly oxymoronic “mohawked fundamentalist” is at the heart of music journalist Andrew Beaujon’s sympathetic foray into the booming Christian rock scene. Is Christian music, he asks, with its embrace of secular aesthetics and simultaneous rejection of sex, drugs, and antiauthoritarianism, nothing but an empty shell? Or more to the point, what’s up with Jesus death metal?

Beaujon dives into this parallel universe, talking with bands that never make the Top 40 yet have hundreds of thousands of fans (the majority of Christian music is consumed in New York and L.A.). We meet a “hip and holy” mega-church pastor with sideburns, his own record label, and a penchant for singing to his miniskirted female congregants about celibacy and their subservience to men. Then there’s the reflective lead singer of, um, crossover band Pedro the Lion, whose angsty songs, filled with what Beaujon calls the “gospel of doubt,” reveal that God rock can be as full of longing, anger, and postadolescent ambivalence as its worldly twin. “Music is the public square of evangelical Christianity,” Beaujon writes, “a place where all these visions of Christ get a hearing.”