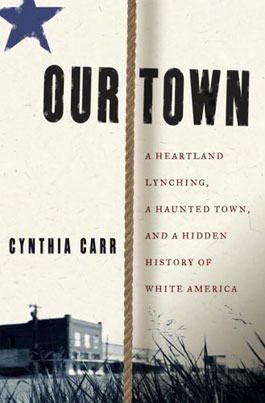 It’s a famous photograph that once seen, you never forget: A crowd of white people, captured in a nighttime flash, mills about as though at a parade or a concert; hanging above them are the mutilated bodies of two black men. The picture was taken in 1930 in Marion, the small Indiana farming town where Cynthia Carr would later visit her grandparents. Its power lies in the contrast between the blithe faces of the spectators and the evil destruction they’d come to witness. The photograph becomes the central mysterynd motivating force behind Our Town.

Returning to Marion, Carr tries to figure out who those people were and what really happened on that terrible night. Her search is quickened by the heavy knowledge that her grandfather was a member of the KKK. When he received a phone call about the lynching on the night it took place, he laughed, and headed out to watch.

This is the sort of shameful family history Carr wants to unearth. Her search for a version of the truth gives her narrative the page-turning drive of a detective story. But it’s her own internal dialogue about race that gives the book its resonance and prevents her from casting easy judgment, even when she encounters the modern-day Klan. Race is still the most vexing question in America, and Our Town is one of the most fascinating and challenging explorations of it to arrive in a long time.