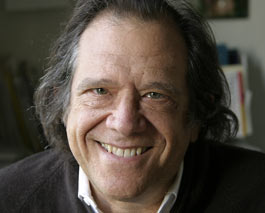 I first met Michael Lerner in Jerusalem fifteen years ago. It was during the first (and sadly, so far only) conference organized in Israel by the magazine he founded, Tikkun, which I had scraped together the money to attend. The mood was electric. Hundreds of Israelis, American Jews, and more than a few Palestinians engaged in detailed and often heated discussions about how to solve a conflict that then, as today, seemed all but impossible to bring to a just and peaceful denouement.

There was something both utopian and pragmatic about the conference: utopian because even in the wake of the first Gulf War, the idea that Jews and Palestinians could sit down and rationally hash out their differences seemed far-fetched; yet pragmatic because the conference was willing to tackle head on such “core problems” as as Jerusalem and the status of Palestinian refugees, issues that most liberal Israelis and American Jews refused even to touch.

That combination of idealism and hard-headedness—sorely lacking in American political discourse no less than in the Middle East—so enthralled me that I wound up working for Tikkun for much of the next decade (I’m still on the magazine’s editorial board). During this time I was witness to the evolution of what for lack of a better term can be termed a “progressive spiritual politics” in the United States. The most basic goal of this enterprise was to reinvigorate a moribund Left (and with it, though not exclusively, the Democratic Party) by helping it recapture the energy and mobilizing spirit of the religiously inspired civil rights and anti-war movements. That such a process was vital for the long-term health of the Party was obvious to keen political observers, such as Hilary Clinton, who—so the story goes—bestowed a “guru”-like status on Lerner and his “politics of meaning” philosophy at the start of the first Clinton administration—until the press distorted his message and the Clintons, true to form, ran away from him like he was a piece of overpriced Arkansas real estate.

This was the story of the religiously inspired Left in the decade since. On the grass-roots level more and more people, liberals as well as conservatives, secular as well as religious (or at least spiritual), began to grasp the potential of a spiritually reinvigorated progressive movement. In official Democratic circles, however, religion was deemed a card to play, a token to throw to the Midwestern middle class, not the basis, connected to a deep human and social need, of a political platform.

Six years of George W. Bush have yet to spark the soul of the Democratic Party; but they have given plenty of time to “spiritual progressives” like Lerner and Jim Wallis, Sojourners‘ editor and best-selling author of God’s Politics, to refine the sales pitch they first delivered together to almost 2,000 people at the first “National Summit on Ethics and Meaning” in 1996. The huge response to Wallis’ book demonstrated that there is an audience willing to hear the argument for a progressively based spiritual politics. 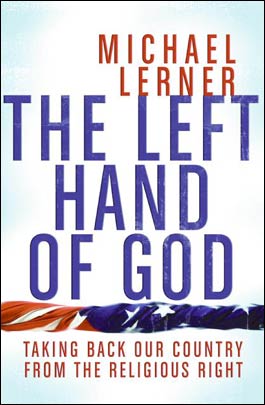 If Wallis’ book helped people understand that one could be an Evangelical Christian and coherently support social justice and many core progressive programs, The Left Hand of God helps us understand the psychological underpinnings of religious conservatism and the theological justifications for critiquing it head on. Most important, offers a host of concrete actions that, Lerner argues, can help bring into the mainstream a progressive vision that, correctly understood, has always been at the core of the Judeo-Christian heritage, even if that heritage has lately been hijacked by the Right.

The Left Hand of God has several basic arguments. The first is that the Democratic Party has given into the “ethos of selfishness and materialism” that dominates America’s hyperconsumerist culture. As a consequence, it has lost most of its moral authority to critique the Right, despite the fact that conservative policies are often selfish, materialist and even ruthless. At the same time, the party moved away from speaking precisely the kind of religious or spiritual language that the Right has deployed so effectively—and duplicitously—to advance its agenda, promoting policies that place people and families under increasing psychological, social, and economic stress, even as it embraces many of the victims of its policies and wins them over to its side.

Lerner’s big insight here, and one of the most important developments since his earlier work, concerns the way the Right uses religion. He argues is that conservatives focus on the “Right Hand of God,” the conception of the deity associated with vengeance, justice, violence, and power, traits deployed against God’s—and thus believers’—immoral enemies. Crucially, he explains how these images are legitimate representations of the God of the Bible (as of the Qur’an). God is a vengeful God, and does exact terrible punishment against those who disobey “His” commands.

This “side” of God must be come to terms with, but it is not the only legitimate expression of the divinity. Lerner points out that God also has a Left Hand, representing the love, compassion, kindness, and solidarity that must form the basis of any religiously guided progressive politics. This argument is crucial because it allows progressives to step onto the terrain that has for too long been dominated by the Right. Against domination and anger, Lerner offers a “Generosity Strategy” based in part on his years of work as a psychotherapist. This, he argues, is the way to break down the negative stereotypes that have alienated so many people from the Democratic Party and the larger progressive movement since the late 1960s, when both moved towards a kind of identity politics with no place for the majority of white, middle-class, religiously Christian Americans.

Lerner proposes such a strategy for tackling the “spiritual crisis” that afflicts America, moving the Democrats away from being the minor league Party of the Right Hand of God and towards something more in keeping with the progressive social vision that once animated it. The problem is, as Lerner admits (making an argument similar to Thomas Frank’s in What’s the Matter with Kansas?), the Left has become too elitist and out of touch with ordinary Americans, to whom conservatives, though directly responsible for policies that do many of them economic harm, connect on a deeper, more personal level than secular liberals have been able to.

And when it comes down to it, millions of people seem to be willing to vote for someone who is screwing them economically if that person at least shows them a basic level of respect even while playing on their fears of all those “others” who threaten either to take away their jobs or convert their kids to homosexuality.

As important as Lerner’s diagnosis of what ails liberals in America is the list of policy recommendations he offers. What’s needed, he argues, is a “spiritual covenant with America,” one that directly approaches American families with a vision and set of policies that reward love and caring, and encompasses kindness, generosity and commitment to the common good. Such an ethics would touch on issues such as education, health care, environmental stewardship, and —no less important—personal responsibility and respect.

It is in the latter area that Lerner in some respects parts ways with Wallis, whose evangelical background has makes it very difficult for him to accept homosexuality, at least publicly. Lerner’s vision of personal morality is more expansive and more in tune with a true progressive vision even as it maintains Wallis’s important focus on social justice as a defining expression of Christian belief.

All of these arguments are persuasive, and what makes the book an inspiring read is that it empowers the reader with practical ideas for implementing the spiritually progressive politics Lerner envisions. And yet, reading the book’s discussion of utterly sensible policy suggestions such as a Social Responsibility Amendment to the Constitution, and education reform, I can’t help thinking that success depends on an incredible degree of faith; not in God, but rather in the American people, and in the possibility that if the Left could find the right way to present these ideas to them they would embrace—or at least consider—our politics.

I am not convinced that “Americans” (to the extent we can make such a generalization) really want the God of Loving Kindness for whom Lerner so powerfully advocates. Suppose Americans, like Russians, or Israelis, or a host of other peoples, have come to like their leaders strong, brutal, and willing to hit back at all enemies, real or perceived, as long as they can manage the violence such policies inevitably generate?

Suppose it’s too late to change our system? Suppose it’s rotten to the core? For as long as I can remember, Lerner has been saying that at some point the utopian becomes pragmatic when pragmatism no longer works. But what happens when utopianism—at least of the progressive, rather than apocalyptic, variety—no longer moves people, because the system has succeeded in making such a transformation seem impossible to imagine?

What made America so strong during the last half century was its ability to return to its ideals of liberty and justice even after straying from them. If, as many argue, America’s century has ended, then perhaps one symptom of its decline is the inability of American culture to renew itself in the way Lerner calls for. The fact that across Latin America, and even in Europe, radical progressive movements based on a progressive reading of Christianity have come to the fore over the last several decades suggests that the best hope for the politics Lerner is calling might well lie outside the United States.

It’s unfortunate, then, that The Left Hand of God‘s analysis doesn’t reach beyond America’s shores. My gut feeling is that for the spiritual vision Lerner and his comrades envision to succeed in America, it will first have to succeed elsewhere, showing Americans by example that there is a Third Way. At the very least, an urgent task before the movement is to bring together the most spiritually aware critics from across the globe to figure out a way to restore hope in an age of increasing cynicism and naked political power. This book is a crucially important move in that direction; let’s hope it inspires similar thinking and writing on a truly global scale.