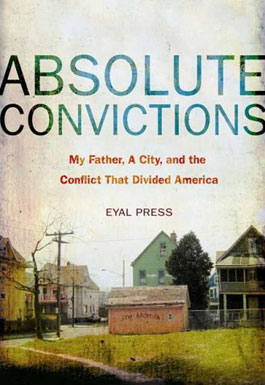 February 1973: Dr. Shalom Press, a young Israeli doctor, arrived in Buffalo, New York, to begin his ob-gyn residency. Less than a month earlier, Roe v. Wade (which he’d not even heard of) had rolled across the land. Settling into his placid new home, he had no idea that he’d soon be, familiarly enough, in a battleground of clashing creeds, complete with terrorism and flying bullets, and that one of those bullets was meant for him.

Press became a close colleague of Dr. Barnett Slepian, the abortion provider murdered by a sniper in 1998. His death was the culmination of almost two decades of escalating antiabortion activism in Buffalo, which went from prayer meetings and clinic blockades to harassment and death threats. In Absolute Convictions, Eyal Press bears witness as his father, a modest but tough sabra, faces down his American-as-rhubarb-pie opposition, gets politicized, is tagged a “baby killer,” and winds up on a fanatic’s hit list.

Press, a journalist with an impressive propensity for investigation, goes beyond simple memoir to search for the tipping point between moral rhetoric and cold-blooded murder. Attending the trial of James Kopp, the man who shot Slepian and nearly killed his dad, Press realizes Kopp is not crazy but terrifyingly focused, a man at war with modernity, God’s own army of one.