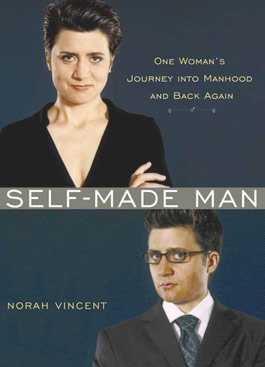 One night, on a dare, Norah Vincent dressed up as a guy and went out on the town. That voyeuristic, jarring glimpse of how the other half lives intrigued her, and a social experiment was born. For 18 months, Vincent donned a suit, glued on a 5 o’clock shadow, and adopted a slow swagger to become “Ned,” a convincingly typical middle-aged guy. She then infiltrated exclusive male spaces from strip joints to a Catholic monastery to get an inside look at the intimate lives of men.

What she discovered was a rigid set of nearly universal rules that keep men from expressing weakness, need, or affection, lest they be seen as wimps, sissies, or gay. It may be a man’s world, but touching each other or crying in public is still off-limits. Even when Ned went on a series of remarkably successful dates with women, he got mixed messages to be confident yet not cocky, down with feminism yet chivalrous. Only when Vincent revealed her disguise did things change. A bowling buddy confided in her about his marriage and after a monk warmly embraced her, she sighed with relief, “See, now I can hug you.” Women also let down their guard once the beard came off. “I always thought you weren’t very hairy for a man,” admits one of Vincent’s adamantly straight dates before hopping into bed with her.

Self-Made Man is not as revelatory as other works of undercover journalism such as Black Like Me or Nickel and Dimed. But it still says a lot that it took a woman to provide such a sharp and entertaining analysis of what it’s like to be a man in the post-feminist world.