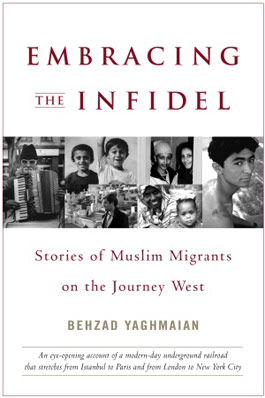 Behzad Yaghmaian’s intimate, horrifyingly vivid account of the plight of Muslim refugees is misleadingly titled: Religion plays little role in most of the stories he tells, outside of the religiously inspired warfare and oppression that drove some of his protagonists—women especially—from their homes. Embracing the Infidel is really about the conflict between humanity and law. None of Yaghmaian’s dozens of informants left their homes lightly; yet because most failed to qualify for refugee status under strict United Nations guidelines that ignore the effects of poverty, sexism, and violence, they face uncertain futures as they crisscross Europe.

Yaghmaian, an Iranian exile who is now an American economics professor, is no disinterested observer. Without polem- ics, he takes us deep into the souls of the men and women he befriends, following them from the chaotic human bazaar of Istanbul to Sofia, Athens, Paris, and beyond. Most of the migrants dream of England or Canada or the United States, but very few will make it that far. Among Yaghmaian’s characters is Shadi, obliged in her native Iran to marry first a drug addict and then a man so abusive that his first wife set herself on fire. Both she and her son are nevertheless deported from Turkey back to Iran. Then there is Roberto, whose family was slaughtered in the Angolan civil war. Escaping from Turkey, his small boat is rammed by a Greek coast guard vessel and he clings to wreckage for five hours before rescue arrives. Other migrants live in trucks or boats or in the woods; they scavenge for food, stumble across frigid, snow-covered mountains, endure horrendous beatings by border guards and attacks by police dogs.

But in the coolly heartrending words of one migrant, Kia, an Iranian boy who made it as far as Greece: “These are not the real problems of the journey. The difficulty is finding a place to start a new life, a chance, and an opportunity to live.”